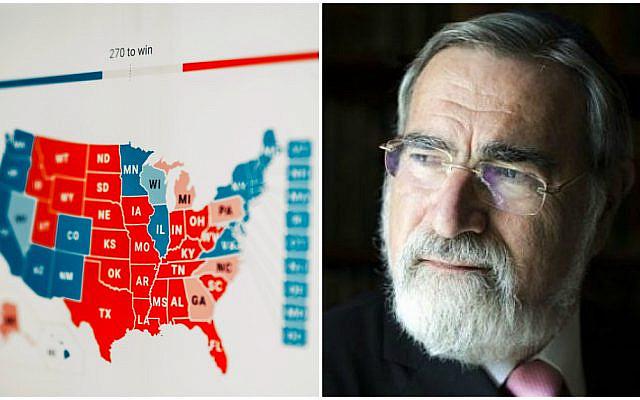 Rabbi Jonathan Sacks, who passed away this weekend, always taught the lessons of unity. (Blake Ezra/Courtesy)

The moment Shabbat was out, I got the news. Not the news that Biden had won the election, but that Rabbi Jonathan Sacks had passed away. I was shocked. I knew the rabbi was battling cancer, and have been studying and teaching classes in the merit of his recovery, but for whatever reason I never – not even for a moment – considered he wouldn’t make it. As I sit here writing this, I am still devastated. Rabbi Sacks had a huge impact on me personally and on the MJE community. Over the last ten years, I have found myself quoting from his books and articles more than any other contemporary rabbi. His Torah moves me intellectually and spiritually. I was also blessed to know him personally and he was the ultimate mensch – always practicing what he preached.

Now, the election. I don’t believe in coincidences and so when I started to process the news about the election, I asked myself: what significance, if any, is there to the fact that Rabbi Sacks passed on the very day a hugely polarized America decided to change its President? What message can we take from Rabbi Sack’s life and from his teachings that we use to best approach the divisive political climate in which we now find ourselves?

For sure, there is a clash of values – real substantive differences – between conservative and liberals being played out by the Democratic and Republican parties. But for the past decade we have simply refused to hear one another. Instead of truly trying to understand the other’s perspective, we have shamed and distanced our political opponents. This has taken place on both the public news level and within our own personal social media platforms. Fox News is where you go to hear the conservative, Republican view and CNN the more liberal, Democratic perspective. Very seldom will you see a respectful and substantive discussion on either of these major networks between the two views. And we’ve done the same on our own personal Facebook and Instagram pages de-friending those with whom we disagree. It’s as though we have become so convinced of our own correctness that it is beneath our dignity to entertain or give ear to another view.

Rabbi Sacks, in his brilliant book “The Dignity of Difference,” wrote that beyond finding common values, we must also reframe the way we see our differences. Our tribal, primordial instinct is to view difference as a threat; however, just as the natural world needs biodiversity to thrive, so too do civilizations require diversity of thought and culture to be spiritually whole. “The test of faith,” Rabbi Sacks explains, “is whether I can make space for difference. Can I recognize God’s image in someone who is not in my image, whose language, faith, ideals, are different from mine? If I cannot, then I have made God in my image instead of allowing Him to remake me in his.”

Not hearing the other also limits our own personal and moral growth. Rabbi Sacks, in an amazing Ted Talk delivered just three years ago, spoke about how he met his wife Elaine, to whom he was married for the last 50 years. When he was 20 years old and first met Elaine, he said “I saw a girl who was everything I wasn’t. She radiated sunshine, she emanated joy…47 years, three children and eight grandchildren later I can safely say it was the best decision I ever took in my life because it’s the people not like us that make us grow.”

Rabbi Sacks goes on to say that if we only surround ourselves with people who share our own views, we end up getting more extreme. He encouraged his audience to renew face-to-face encounters with people “not like us.” And we need to do this, he said, so we can learn that we can disagree with people and yet still stay friends. “Every time we hold out the hand of friendship to someone not like us…we heal one of the fractures of our wounded world.”

Anyone who has studied Talmud knows of the endless debates between great rabbinic scholars who argued – but respectfully and without personalizing the dispute. It is interesting to note that every time the Talmud records a debate between the two great scholars Hillel and Shamai, it always describes their disputes as being between the “House of Hillel“ and “House of Shamai.” Their houses or academies disagreed on major issues of Jewish law, but Hillel and Shamai remained colleagues and friends with their children – even marrying into each other’s families. It is only through rigorous debate that the deeper truths of life are ultimately revealed.

And so, here’s my challenge: Over the next week, reach out to someone who you know voted for the candidate you did not. Tell them you really want to know why they voted the way they did and engage that person in an honest discussion about your differing views. Try to keep it civil and respectful and stay friends! Even if the conversation does not go as well you would have hoped – just keep at it. Be patient. We are working on a muscle we have all left to atrophy, and so it may take some time to get used to this kind of exchange. It we can make this kind of honest dialogue a real part  of our lives, we will not only honor the memory of a spiritual giant, we will grow ourselves and as the good rabbi so eloquently put it, we will heal a fractured world and dignify our differences.

Thank you to Michelle Soffen, an expert in conflict resolution, for her vital contribution to this article.