As the stars came out and another beautiful Shabbat drew to a close, I realized that I had run out of some wartime necessities, namely milk for my kids and ice cream for me. As my husband was content to wait it out until morning to brave the craziness of an Israeli supermarket, I decided instead to take my fate (and honestly, given my driving capabilities, the fates of anyone else unfortunate enough to be on the road at the same time) into my hands.

I drove ten minutes away to the one store I knew would be open. After spending several minutes convincing myself that there was indeed no Ben and Jerry’s hiding behind the decidedly inferior brands of ice cream on display, I grabbed the least objectionable container of caramel and vanilla flavored ice cream and a carton of milk, and waited for the only cashier to decide that ringing up groceries was more life affirming than talking to her boyfriend. Unsurprisingly, this burned another 10 minutes.

While I was standing there watching my ice cream defrost, I had time to look over the baskets of my co-shoppers. The girls standing ahead of me in the slinky black dresses were only buying a bottle of wine. I remembered those days. 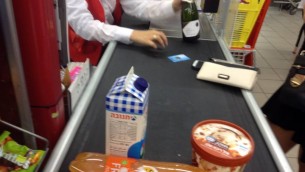 Or rather, I remembered the not remembering from the days after. I was tempted to go back to the wine and spirits aisle, just to prove that I hadn’t lost my step with a passing decade (or two), until I remembered that wine reacts badly to my cholesterol medication.

Once I got back home, my husband informed me that we had gotten two sirens since I had left. I thought that seemed a little bit odd, since I hadn’t heard any sirens, and there were still kids playing basketball in the street. Of course, we had already experienced one rocket attack where there was admittedly no siren, and kids still playing basketball at nearly 11 o’clock at night was odd, regardless, so I just chalked it up to faulty equipment and started doling out the OTC opiates ice cream.

Within 15 minutes, I heard the wail of another siren. I froze, licking the remnants of caramel from the tip of my spoon. All four kids were asleep, and we’d need to go down at least two flights of stairs to be in the safe zone. After a moment’s hesitation, my husband and I decided to let the kids stay in bed. When ten minutes passed with no discernible changes, we resumed breathing, which in my husband’s case, quickly deepened into snoring.

I was still on edge from the increased rocket activity, and tried to calm myself down. For me that meant watching the RiffTrax Live version of “Manos: The Hands of Fate”. I had barely made it through the interminable opening driving scene, when I heard another siren! I was starting to get worried. I mean, this was Hadera, not Tel Aviv, or Sderot. Now that there were rockets that could reach Haifa from Gaza, what would the point of hitting Hadera this much even be?

I went through the Twitter feeds for Tzeva Adom, Muqata, and Alarm Darom warnings, and nothing about Hadera was showing up. Over the next two hours, I heard the siren go off another three times, culminating in a crazy late night ranting post on Facebook.

Finally, I promised myself that I was going to investigate further if the alarm went off one more time.

When the eighth siren in four hours began to blare, I got up and followed the sound. Unexpectedly, it was not as loud by my window as when I wandered towards the front door. “That’s weird,” I muttered to myself. And that’s when I found the source of the siren: my husband’s phone, plugged in at the desk in the living room. The Tzeva Adom app had been sounding every time rockets were going off in the Hof Ashkelon region, near the border with Gaza.

I shut off the app, and made a mental note to strangle my husband in the morning, because I couldn’t take the sound of the alarms if the police got called on me for doing it right then. On the one hand, I was annoyed by the lack of sleep, and the low level state of fear generated from dealing with the constant alerts. On the other, it was pretty enlightening to go through what the people living near the Gazan border must be experiencing several times a day.

For me, I broke after three hours. And that was in spite of thinking I had at least 90 seconds to get to safety, and not really believing that a rocket would hit where I lived. In the communities of Hof Ashkelon, the rockets are a constant danger, and you only have 15 seconds to escape. We would have spent that night sleeping in shelter. Or trying to sleep, anyway. So, when someone talks about proportionate retaliation, tell them to download the Tzeva Adom application, and sit through one night as if they lived in Hof Asheklon. And then ask if they are hearing the color red yet.