The Blogs
Avi Schwartz
Apply for a Blog
Please note that the posts on The Blogs are contributed by third parties. The opinions, facts and any media content in them are presented solely by the authors, and neither The Times of Israel nor its partners assume any responsibility for them. Please contact us in case of abuse. In case of abuse,
Report this post. 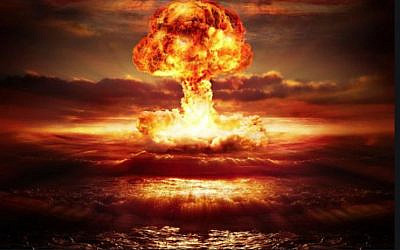 Nations and people, in general, usually do not care about others unless it is a matter of self-interest. A fact of human nature and the human condition is best characterized in Cain’s haunting remark after killing his brother, Abel, 5781 years ago, ” Am I my brother’s keeper?” And since that fateful moment little has changed regarding this attitude. Unless your brother’s or neighbor’s actions affect your self-interest, it will most probably not register in your world. Sad but true. The 20th century and its bloodthirstiness for genocides and the lack of care and intervention by other nations demonstrated this sentiment so well.

Even now with 15,000 nuclear weapons in the world and nine nuclear states in conflict, how many truly protest the end of nuclear armament? Rather many focus on climate change. And why is climate change the issue of the day, because it affects one’s self-survival?

Apathy for others is “natural”. (Hence the reason the Torah commands, “Love thy neighbor as thyself”)

And how many outside south Asia truly care that India and Pakistan are in conflict? They are on the other side of the world. And so is Iran and Israel.

True, a nuclear confrontation between Pakistan and India would result in a great loss of life, yet it would be only limited to these two countries. And it would be the same if a nuclear confrontation took place between Iran and Israel. It would only be limited to the Middle East. And with global anti-Semitism on the rise, many might be delighted with the end of the “oppressive”, “racist”, “apartheid”, “world controlling” Jewish State.

So what tactic can we employ to convince the masses of the world to put an end to Iran’s race to a nuclear bomb?

Leading scientists and experts on the environmental impact of nuclear war, such as Brian Toon, a professor in the Department of Atmospheric and Oceanic Sciences at the University of Colorado-Boulder and a winner of NASA medals for Exceptional Scientific Achievement, have shown that a “mountain-sized asteroid whirling ten times faster than the speeding bullet of an assault rifle hit the shallow waters of what is now the Yucatan Peninsula of Mexico. The immense energy of that impact hurled rocks as far north as Canada. The vaporized rock and water of the explosion rose far above the atmosphere and spread over the planet. As the molten drops of rock, the size of a grain of sand, cooled and solidified into an immense form of “shooting stars”, they re-entered the atmosphere and heated the upper atmosphere to a thousand degrees Fahrenheit. The glowing skies ignited everything on fire. And clouds of smoke rose to the upper atmosphere and blocked the sun.”

Within an instant, the world’s climate changed and the world starved to death, killing 70% of the life on our planet.

So what does this have to do with Iran’s threat?

The smallest nuclear bomb could kill 500,000 people, five times the amount of the Hiroshima bomb.

Nuclear weapons kill through four different manners: 1) shock waves that knock down concrete buildings and kill all within the immediate area 2) radiation poisoning —a nuclear blast’s energy fissions, killing 50% to 90% of the given population over the course of several weeks, 3) residential building collapsing, and 4) a blast of light so bright which produces 3rd-degree burns, igniting anything inflammable, such as plants, trees, newspapers and even the clothes you wear.

Yet this is only the scenario at ground zero. The collateral effects after the blast are similar to the asteroid that wiped off 70% of life on Earth. Namely, world-scale fires and the smoke produced.

Brian Toon and his fellow scientists, Luke Oman, and Alan Robart calculated the smoke that would result if only Pakistan and India had a conflict.

Within two short weeks, enough smoke would result that the entire Earth would be covered, rising to altitudes between 20 to 50 miles above the earth, where it does not rain. The smoke would remain for years and sunlight would be blocked.

Suddenly the war between the “far off and remote” Pakistan and India become a worldwide catastrophe resulting in the destruction of 10% to 40% yields of corn, wheat and rice for years to come. The world has enough food to feed the entire planet for only 60 days unless agriculture is replenished. But with sunlight blocked due to the stagnant smoke the world will not be able to replenish because photosynthesis has ended.

Ira Helfan, member of the Noble Peace Prize, International  Physicians for the Prevention of a Nuclear War, estimated that One to Two Billion people would die from Starvation as a result of a nuclear conflict between Pakistan and India.

And the same is true if a conflict would take place between the “far off and remote” countries of Iran and Israel.

Hence the prevention of the Iranian bomb is no longer a Jewish problem, or even a Middle East issue. It is now a global problem; a climate change problem; a survival problem of me and mine.

Bibi, the Israeli government, and all those concerned should employ this tactic to convince the world community of the danger of Iran obtaining nuclear capability. Because “I am my Brother’s Keeper” is best realized when your brother’s interest serves the Keeper. In this case, we must make the governments and the masses of the world — the Keeper — realize that an Iranian existential threat against their Jewish brother, Israel, is truly a global existential threat towards their very selves.