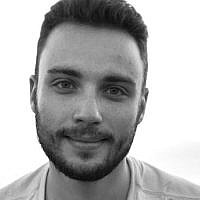 The Blogs
Zach Busch
Apply for a Blog
Advertisement
Please note that the posts on The Blogs are contributed by third parties. The opinions, facts and any media content in them are presented solely by the authors, and neither The Times of Israel nor its partners assume any responsibility for them. Please contact us in case of abuse. In case of abuse,
Report this post. 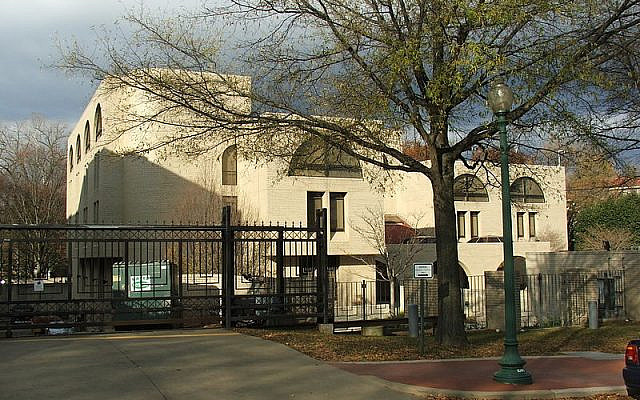 There is no gallery at the Embassy of Israel in Washington, DC. There is no themed exhibit to speak of, no place in which to stand and view art. You will not find signs or labels or names advertised. Rather, the entire building is so saturated in art that at times you may at times forget it’s even there.

An embassy acts as a vehicle to present its country from many angles, from policy priorities to cultural values. While art cannot so easily communicate the finer nuances of the politics of the day, it can give weight and context to the work that takes place in the building, offering glimpses into a country’s soul. But by curating art too carefully, that glimpse can lose its trueness; Israel allows its art to breathe, to speak for itself.

Some DC embassies—like those of Australia and Canada—succeed at creating spaces in which to peruse and celebrate art, thereby sanctifying it. By creating galleries, these embassies give a serious-minded purpose to their art: when you step into the gallery, it at once becomes your complete focus. It tells you that this society cares about its art, curates it, and sets aside time to enjoy it. Yet rather than placing art and politics proximately, the Embassy of Israel removes the boundaries entirely. You would be hard-pressed to find one room in the building, save restrooms, which does not contain a painting, photograph, or cultural poster. You do not need to set aside time to view art; it is already there. You don’t need to interrupt your business to view art; you live among it.

One of the most striking aspects of the Embassy’s layout is that art is everywhere. As with all embassies, only certain wings and rooms are open to guests. But even if you visited the Embassy and got yourself horribly lost, you would continue to see new, intriguing art pieces off the beaten path. Even in the basement, with its white walls and doors marked only in Hebrew (if at all), you would continue to find new pieces, new styles, new themes, and not at all repetitious. This layout is organic in a way that diplomatic work so often is not. Those paintings in the basement may as well have grown out of the wall.

Another asset of such an atmosphere is it makes the space feel lived in. At the end of the day, an embassy is essentially an office building; the Embassy of Israel allows its paintings to be decorations that make the office more pleasant to work in, and not just functional diplomatic tools. For a country often portrayed more for its politics than its people, this relaxed approach to art is fundamentally humanizing.

Likewise, the building’s architecture is unique, but doesn’t try too hard to be something it isn’t. With arches and sandy bricks that evoke the winding streets of the Old City, the Embassy feels like it could be a government building in Jerusalem, transported to the unassuming neighborhood of Van Ness—but a government building nonetheless. Inside are offices and desks and swivel chairs, nothing out of the ordinary. But its halls are decorated with art that reminds you of how much of Israel the Embassy won’t show you.

So what does the Embassy elect to show you with its art? Simply put, it shows you the story of Israel, as a piece of the greater story of the Jewish people, in all the ways that political discussion cannot. A diplomat can explain Israel to you, but its artwork can show it to you. A diplomat can tell you about Jerusalem, but the paintings will show you Jerusalem from a thousand angles: as it looks today, as it appears in our dreams, as we imagine it in our prayers.

Israel is a country in transition. Its history is both very, very young and very, very old. Whoever thought a “startup nation” would be built among holy sites? The artwork embodies the same fluidity of time and space. Some pieces are truly fresh and abstract, where the best interpretation is your own, just as Israel’s meaning is personal. A mosaic in the lobby reminds you of where you come from, like an ancestor’s hand reaching out. One series shows the faces of old bearded Jewish men, paternal faces that could depict Abraham as easily as a rabbi from the 90’s; in Israel, the intensely biblical and the shockingly modern blur into one face.

Israel is also a country experiencing a Renaissance; the building seems to say that most of our greatest artists have not yet been born. Sure, you might stumble across some names you recognize—a Reuven Rubin or a Menashe Kadishman—but these are not bragged of, and their names are not flaunted. You won’t find a tag or description except a signature in the corner of the canvas, or the occasional small-font nameplate devoid of embellishment. Some embassies and governments must preserve art, keep it alive; Israel doesn’t have to. Instead of scrounging for art to display, the Embassy has so much art that it cannot possibly display it all. Israel oozes with art. Israel is art.

Through art, everyone who takes part in the work of the Israeli Embassy – employee, visitor, guest – is reminded us that we are all part of a story, that the history of this country is still being written. And in a hundred years, or a thousand, the story we are living may yet adorn an embassy wall.

This article first appeared in Six By Eight Press as part of a longer piece exploring how foreign embassies in Washington display and utilize art.

About the Author
Zach Busch is a Jewish American writer and PR/communications professional based in New York City. He holds a BS in international politics from Georgetown University's Walsh School of Foreign Service. Before relocating to NYC, Zach spent two years managing social media for the Embassy of Israel in Washington, DC.
Related Topics
Related Posts
Zach Busch
Comments