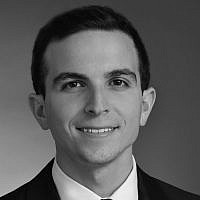 The Blogs
Matthew Rudolph
Apply for a Blog
Advertisement
Please note that the posts on The Blogs are contributed by third parties. The opinions, facts and any media content in them are presented solely by the authors, and neither The Times of Israel nor its partners assume any responsibility for them. Please contact us in case of abuse. In case of abuse,
Report this post.

I want to make it clear from the outset that this is not an analysis of the Iran Deal. The experts have reviewed its content and fed opinions to us. We, as concerned members of the American Jewish Diaspora, however, are now left to ponder what has just happened, how it affects us, and what are our obligations moving forward.

I, for one, find it most interesting, albeit frightening, to examine a particular subtext of the Iran Deal: the effect on contemporary American Jewry.

Theodor Herzl once warned — I think prophetically — that if the Jews finally found a nation free of persecution, by the third generation they would “become the goy.” To Herzl, persecution and survival were fundamental to Jewish continuity, whereas comfort in the Diaspora was lethal. This is Political Zionism.

Other pillars of Jewish continuity have been identified as well, with foremost being Torah. Historian Max Dimont cleverly put it in his book Jews, God and History that Torah revolutionized religion. A Torah is portable, and thus allows a faith to survive on the run. Exile was not a death sentence to the ancient Israelites because Jewish practice, unlike the marble temples of Athens or Rome, could be physically removed from a sanctuary and transported. Modern Jews, however, are generally not a religious people, with roughly only 10% of American Jews identifying as Orthodox. Torah, unfortunately, is not the fix-all it once was.

Herzl’s timeless prediction is more pertinent. Exile is a prominent strand of Jewish DNA. To Jews, places like Egypt, Babylon, Persia, and Spain are more than spots on a map. They are stories of Jewish escape and survival, consistently prefaced by persecution.

Late 19th and early 20th century in Europe was no different. Anti-Semitic pogroms forced Jews, again, to pack their portable sacred texts and run. My great grandparents, along with millions of others, reached Ellis Island. Lady Liberty’s welcome was unprecedented. Sure, anti-Semitism lifted a finger here and there, but James Madison’s constitutional democracy treated Jews fairly and with equal protections.

I am a third generation American Jew, as are my Jewish day school and summer camp friends. Herzl, I take it, would have found us interesting. A non-persecuted third generation of Diaspora Jews, alive during a time where a Jewish sovereign homeland was in existence.  These are competing forces in Herzl’s mind: the latter is the solution, whereas the former is the toxin.

The Iran Deal, from this perspective, is incredibly insightful. Iran’s confident and proud anti-Semitism is likely second to none since Nazi Germany. Nevertheless, according to last week’s Los Angeles Jewish Journal poll, 49% of American Jews support the Iran Deal, compared to 28% of Americans at large. Avoid the nuances of the Deal for just a moment and fully digest the results: non-Jewish Americans are quicker to scrutinize an agreement with Tehran than American Jews.

The Iran Deal has even terrified prominent Israeli doves like Isaac Herzog and Ari Shavit and unified all major political parties.  At the same time, 78% of Jewish Israelis say the Iran Deal “endangers” the country, in what Daniel Gordis, one of the more revered Diaspora affairs commentators, referred to as “another chasm,” when contrasting this with the LA Journal poll of American Jews.

Within the context of Herzl’s prophecy, I see only one way to reconcile this apparent contradiction. To most American Jews — most noticeably to the Third Generation — Israel is a bothersome reminder of the past. Israel, like a foreign cousin that recently moved to town and had not yet discarded his thick Polish accent, revives memories of a sorry history. The “Jew” in American-Jew is a tattooed suffix that most would prefer to wash away.

The “intermarriage conversation” has polarized Jewish parents from their children; the Conservative Movement — which intended to bridge Jewish tradition and American acceptance — is on life support; and supporting Israel on campus is akin to social suicide. Israel has been evicted from the hearts of the Third Generation. The uplift of Zionism after the Six Day War is not an experience the Third Generation can recall. Instead, perpetual hot wars with Arab neighbors and cold diplomatic wars with the UN and BDS adherents, steal the conscience. The Jewish brand no longer appears necessary from Herzl’s presumed perspective, since persecution has faded

Should we not celebrate? On a most basic level, of course we should. Not even a great courtroom lawyer can disguise freedom as a negative and persecution as a positive. But should our rejoicing manifest itself in a divorce with Israel? Only several decades removed from the Holocaust, one would think Diaspora Jews would seek to protect, at all costs, a Jewish homeland. That we trust our security here in America to the extent that nearly half of American Jews praise the Iran Deal, while the overwhelming number of Israelis are vehemently against it, sends chills down my spine. I pray we wake up before persecution pries our eyelids open.

About the Author
Matt Rudolph is an attorney at a large litigation law firm in Chicago. He has helped launch an organized committee of attorneys, which educates Chicago attorneys about BDS-related legal concerns and available legal means to offer assistance. He lectures frequently in the Chicagoland area about BDS, anti-Semitism and the related legal landscape. Follow him on Twitter @mattrudolph88
Related Topics
Related Posts
Comments