Here’s one of our latest teddy bear tales that has taken place over the past two months out of the six months in total. I call this “Hesed in the House, take #10”. It was actually our 10th act of Hesed in the past six months, that surprised so many of us, especially me. I never imagined that we would come up with any sort of “Day of Giving” campaign or be invited to a day of giving, that would be acceptable to anyone, due to Covid fears.

But at Bears from Bergenfield, we were, and this is what transpired.

Close to two and a half months ago, Rabbi Ethan J. Katz, NCSY Director of Youth missions for the US and Puerto Rico, contacted me and invited me to bring 500 teddy bears to his upcoming mission, located in Long Beach, Long Island.  A mission during Covid? That sounded interesting and intriguing. How could anyone organize a mission during Covid and insist to maintain social distancing and mask wearing, especially with teenagers? I was curious.  How was this going to work? I had to find out, even if my teddy bears wouldn’t be a big hit. What could I lose? Someone would most probably take a teddy bear or two and I would have my curiosity sated, at least temporarily.

My assignment, if I chose to accept it, would be to pack up my car with 500 teddy bears and other assorted stuffed toys and bring them to their Habitat for Humanity site, located next door to the MLK center in Long Beach. I would be set up for distribution, in their jointly shared parking lot.  I would be distributing teddy bears throughout the lunch periods that particular upcoming Monday to any child tagging along with the adults. These adults were there, at the MLK center, picking up the free lunches, supplied by New York food banks, being distributed during Covid.  The volunteer workers at Habitat were also invited to lunch and free teddy bears.

Would anyone want a new looking and used free stuffed toy? I wondered. Would I be surprised or disappointed, or somewhere in between?

I was told that 3,000 meals were handed out weekly from the MLK food stations, set up to supply free lunches, salads, and snacks. I assumed that someone would want a free toy for some child to pick up along with their free lunch.

It didn’t take too long and a few people straggled over to check out the toys sprawled all over four tables. We assumed that placing 250 stuffed toys for perusal, would be a good start to our day.  I was even sent over a young teen volunteer to assist me in advertising our free toy collection and assisting me in handing out the toys. One teen osted our efforts on his Instagram account. Another teen worked on creating a sign to draw people’s attention to our booth.

So who showed up, you might wonder? We had a school bus driver marm who stopped and needed two gifts for her nieces, but ended taking six toys. There was a businessman who was entertaining his nephew that week and needed a toy to keep his nephew occupied with fun. Then there was a middle aged brother who was watching his sister die in the hospital and thought that a stuffed dog would keep her company until he would be able to return to visit with her. What surprised me the most were the middle school and high school students who couldn’t wait to get their hands on the several huge stuffed toys that someone in Bergen County had donated to us. I thought that you reach a point in your life and are too old for toys. Evidently not. Those young people wanted to take more toys than anyone else who came to our table. There were also two grandmothers who take a dozen toys or so each for all of their grandchildren. There was another grandmother who wanted to bring toys to Puerto Rico when she would be flying out that coming Friday.  The variety of takers was unexpected but appreciated. Those who appeared came from all walks of life and all faiths.  The teddy bear had showed us that a teddy bear could unite us.

Lunch ended sooner than I had anticipated. Our toy collection was thinning. Rabbi Katz wandered over to our tables and asked how our “Day of Giving” was going. I replied that the accumulation of toys was thinned. We surveyed the four table areas and sure enough, there were certainly many toys missing from the overflowing tables.  I estimated that we had parceled out close to one hundred and fifty toys that day.  We both nodded and smiled.

As I packed up the remaining toys in an oversized garbage bag,  at the close of lunch, I wondered would our good fortune continue and would there be other adults and children, returning the following day for more toys?

I turned towards Vanessa, who was working the food truck distribution site. She nodded, as if she understand my questions and concerns. I knew that I couldn’t return for some time to resume handing out more toys. Would she be able to cover for me until I could return?

So that was how the first “Day of Giving” ended. I loaded up a corner or two in her food truck with the remaining toys left over, for continued giving, for the consequent days to come. I was reassured that she would carry on the giving for me until I could return.  She even promised to send me pictures.

You just never know when someone will want an act of kindness to take place and make it happen. Even if the timing isn’t quite right and it happens to be Covid-19, we came together for this “Day of Giving” and made it happen. 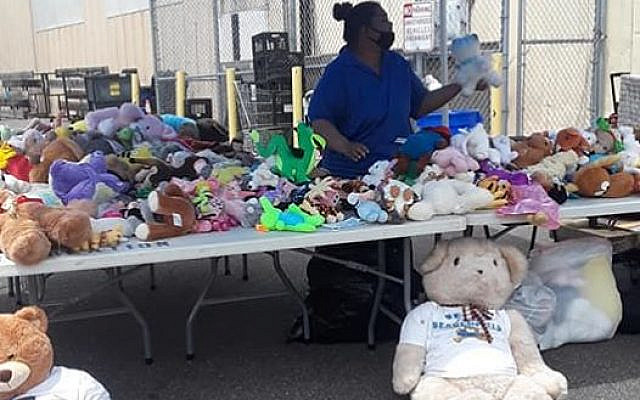 Vanessa sets up the Day of Giving tables. 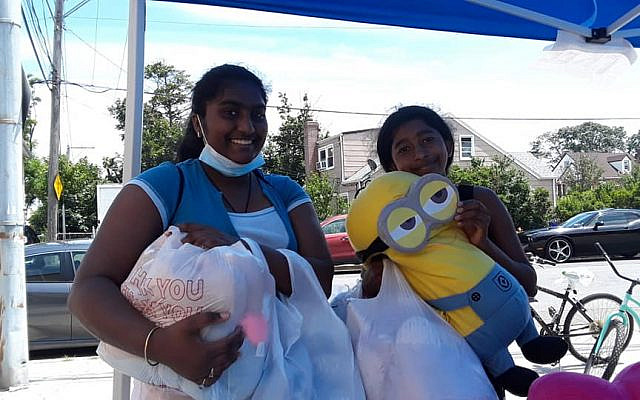 Teen birthday girls turn 15. What a treat for them. 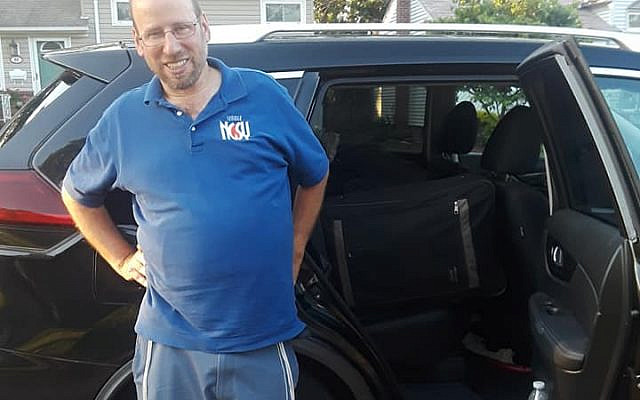 Rabbi Ethan Katz, the one who organized , my day of giving.

A Covid episode in the giving of the teddy bears.