When an Israeli Prime Minister visited India last year, two very ancient religions and cultures, that have rarely interacted in the past, come together. Although Jews have lived in India for more than 2,400 years, the traditional Jewish avoidance of missionary activity has meant that the very religious Hindu culture knows very little about Judaism; and what it knows comes from the bias of Christian missionaries.

Like Hindus, Jews have produced a very large and complex textual tradition; and value religious study over sacrificial rituals. Both Hinduism and Judaism have many dietary restrictions. Unlike Hinduism, by virtue of their religion Jews have always been, and will always be, a minority.

When it’s daughter religions, Christianity and Islam took over the western world, the Jews continued to follow their own tradition and refused to assimilate.

Of all the religions and cultures that existed in the world 3,000 years ago when David was King in Jerusalem only the Jews and the Hindus have survived.

Even in the Messianic Age “each nation will follow its own God” (religion) and Jews will follow their God. i.e. religious pluralism is the will of God. (Micah 4:5)

B: Since Jews did not choose this historical fate, they felt they were chosen by God to play an important role in the spiritual development of all humanity.

Jews were redeemed from Egypt not as individuals but as a community/people.
The covenant at Sinai was with the whole people not just with individual believers.
The Jewish religion is mostly the outgrowth of events that happened to the Jewish people, not the result of the spiritual insights of one or more individuals.

Judaism’s response to Plato’s cynical view: “Democracy will always degenerate into chaos because people will vote for their immediate self interests, not the long-term good.” is to proclaim “Either community or suicide.”

When non-Jews become Jewish they join the Jewish people i.e. “your people shall be my people” precedes “your God shall be my God” (Ruth 1:16)

C: Differences are very important even though nothing is totally black or white.
Differences are of degree and relative mixture. Thus Judaism teaches:
This world, and what you make of it, is more important than the next world.

How you behave is more important than what you believe.

Human nature is both good and bad, but in most people the good is greater than the bad.
God will not make us good without our co-operation (free will) and humans alone can’t create a holy society. God and humans need each other.

D. Relationships are the most important aspect of living a good life.
Relationships demand commitments. (covenants)

To do something from a sense of duty (mitvah) is spiritually superior to doing it just because you want to do it. (mitzvah is Hebrew for “commandment. A combination of a religious law, personal obligation, and a privilege. Plural is Mitzvot. Often used to refer to a meritorious or charitable act. First known use: 1,300 BCE)

To do something as part of a community or a tradition is better than to just do your own spiritual thing in order to realize yourself.

Relationships are mutual, interactive and continually changing, so Judaism is an always developing religion, as each generation reacts to God’s continual call.

While Judaism is the only religion for Jews, other religions also provide paths that lead to God and to a good way of life. Religious pluralism is what God desires so our humility and tolerance of others can be tested. As Swami Vivekananda taught: “follow one, and hate none”. This same teaching is in the Quran (109:6): “You have your religion and I have mine.” or as the Indian Muslim sage Maulana Wahiduddin Khan says: “Follow one religion and respect all.”

Like Hinduism anyone who studies the Hebrew Scriptures from a Rabbinic Bible is struck by the number of different commentaries that surround the few lines of the sacred text on each page.

Most religions that have a sacred scripture have editions that come with one commentary. Occasionally they have an edition with two or three commentaries. The standard Jewish study Bible usually comes with at least 5-10 different commentaries.

All of this traces back to a verse in the Book of Psalms: “One thing God has spoken; two things have I heard” (Psalms 62:12). In other words, multiple interpretations of each verse of any Sacred Scripture can be correct, and the word of God, even if they contradict one another. The Hebrew term for this concept of pluralistic interpretation is; Shivim Panim LaTorah (each verse of Torah (Sacred Scripture has 70 different facets).

This concept used both by rationalist and mystical Torah commentators, indicates how fundamental it is to understanding the meaning of Divine revelation. Of course, we know of no verse that has 70 different interpretations; yet. After all, if we knew all 70 glosses to a verse we would understand it as well as it author; which is impossible. Also what would be left for future generations of Biblical scholars to do? But, most verses have at least 3-5 different glosses.

For example: What kind of a tree was the Tree of the Knowledge of Good and Evil? (Genesis 2:17 and 3:6). Most people think it was an apple tree. They have no idea why, or what that interpretation is supposed to mean.

The Rabbis offer four different interpretations of the Tree of Knowledge of Good and Evil; and each of them provides insights into the meaning of the Torah’s account of what makes humans special and what it means to be “like God, knowing good and evil.” (Genesis 3:5)

Rabbi Yose said it was a fig tree for as soon as they ate from it their eyes were open and they covered themselves with fig leaves. (Genesis 3:7) This is the simplest explanation and has the most textual support but it doesn’t tell us why figs represent morality.

Rabbi Judah bar Ilai said they ate from a grapevine i.e. wine (alcohol) represents good and evil because humans have the free choice to use wine to sanctify the Sabbath or to become an alcoholic.

Rabbi Meir said it was a wheat tree i.e. wheat was the first crop to be domesticated and thus is a good. It is a metaphor representing the beginning of farming and then urbanization and civilization. Settled life is a great test of social morality because nomads can always split apart if they can’t live together, but settled people must develop an ongoing legal system and abide by it.

Rabbi Abba said it was an etrog tree. An etrog, used for the Jewish Sukkot-harvest festival, is called a goodly tree and it is good to thank God for the harvest (Leviticus 23:39-42). Gratitude is a spiritual personal value transcending ethics, involving attitude, personality and feeling. The etrog, according to the Rabbis is special because its outside (bark and wood) tastes the same as the inside of the fruit. Thus a good religious person should be the same inside and outside.

These four ways of interpreting a sacred text illustrate the four kinds of religious understanding:

The plain meaning of Rabbi Yose.

The moral lesson pedagogic way of Rabbi Judah bar Ilai who wants to teach people that many things like the grapevine are capable of being used for good or evil purposes. They are not intrinsically good or evil. We can choose how we use them, so we make them good or evil. (Sex,money and meat eating are other examples.)

Rabbi Meir, who was reputed to know dozens of fox fables, thinks social morality is the primary sign of humanity. Farming brings about relatively dense settlements, property disputes, government and economic hierarchies. All of this calls for a just legal system. Thus wheat is a good metaphor.

The forth way is the personal insight, mystical psychological way of Rabbi Abba. The etrog is part of the citrus family. Unlike an orange, a lemon or a grapefruit an etrog has no commercial value. Jews give it a high value (each one costs 100X what a lemon costs) for spiritual reasons. So too does morality have a spiritual value much greater than simple humanistic ethics.

My contribution is that the tree is a Torah tree. Torah is called a tree of life (Proverbs 3:18) and most Jews who study Torah and do Mitsvot live longer than most Jews who do not. Since it is desirable to live a long life, it is also wise to live in a morally simple way which may be the literal or common sense way of Rabbi Yose. 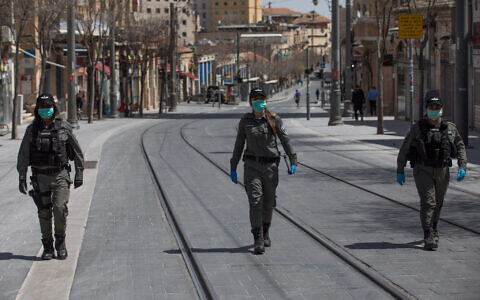 Top health official: Some virus restrictions could be lifted after Passover
TOI staff 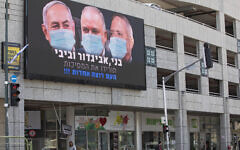 With Gantz on patio and PM inside, sides say progress made toward unity gov’t
Jacob Magid 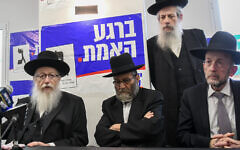 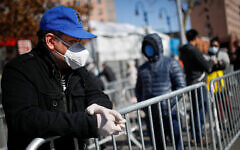 Face coverings recommended for all of US, but Trump says he won’t wear one
Eric Tucker, Zeke Miller and Mike Schneider 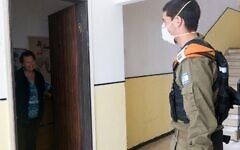 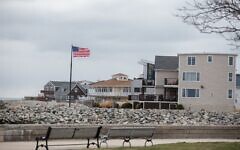