The very essence of a multi-faith society, the concept of which I adhere to, has no place with the likes of Hizb ut-Tahrir. Yet, in North America and in many parts of Europe, this revolutionary group, with their seemingly pharisaical Facebook site, remains in good standing.

– Hizb ut-Tahrir. No longer the whipping boy of the fervent minority demanding a world Caliphate.

– Hizb ut-Tahrir is front and centre of an enthusiastic Islamist bunch of antisemitic, anti-West and anti-democratic educated ideological vicious revolutionists who, in the West, dress as if they are on the board of a blue-chip company.

Have I made myself clear? Do you get the message?

I venture to say many of us have never heard of them. Well, you better start right now. I’ve been following and writing about this revolutionary group for years. They’ve matured into a sophisticated organisation that maintains the illusion, to us dumb Westerners, that they have an interest in reaching its goals of a Caliphate peacefully and through non-violent means. Poppycock!

For a start, the Britain’s think-tank, formally known as the Centre for Social Cohesion (CSC), now the Henry Jackson Society, stated with sources on page 28 of their HTs Ideology and Strategy report:

HT promotional materials have called for violence against Jews. Despite its official non-violent stance, HT has called for violence against Jews. In 2002, HT leaflets found in Denmark urged Muslims to kill Jews “wherever you find them, and turn them out from where they have been [sic] turned you out.” A BBC report quoted the HT leaflet further: “The Jews are a people of slander…a treacherous people… they fabricate lies and twist words from their right context.”

In 2003, similar anti-Semitic rhetoric resulted in the group being banned from many university campuses in Britain and a complete ban of the group in Germany.

HT supports not only violence against Jews in general but offensive jihad against Israel in particular.

Accordingly, HT views violent acts against Israel as legitimate political protest until Israel no longer exists. The organization’s literature has supported Islamist suicide bombers in Israel, the Gaza Strip, and the West Bank.

In 1994, HT’s global leader, Ata Abu Rashta, reiterated this point when he declared that Jews who came to Palestine after the collapse of the Ottoman Empire have no right to live there. He called for all Jews of fighting age in Israel to be “killed until none survive.”

“HT also sanctions killing Jewish ‘women, children and elderly’ – innocent civilians – as collateral damage. In addition, HT “makes it permissible to bomb planes and carry out suicide bomb attacks, or any other means necessary, to kill the ‘enemy unbeliever’”.

So much for peaceful and non-violent means!

Now, of course I won’t be duly surprised if many western-based HT revolutionists will strenuously object to these obvious blatant so-called Jewish inspired lies. And when I watch a video that tells me Hizb ut-Tahrir America is again set to hold their annual conference in Glendale Heights, Illinois on Sunday, 23 April 2017, called “Falsehood Perishes, Islam Prevails,” I wonder what in hell is happening in America!

By last count HT is operating in over 40 countries worldwide including the USA, Canada and the UK. Australia has been pussyfooting to ban the organisation for years. However, HT is “banned in many Muslim-majority countries, including Bangladesh, Egypt, Jordan, Saudi Arabia, Turkey and Uzbekistan. In Malaysia, the Selangor Fatwa Committee  has outlawed HT, declaring the group ‘deviant.’ Last year in Singapore, an HT member was arrested for propagating online extremism.

The group is also banned in China and Russia. HTs British chapter in London is regarded as the “nerve center” of the movement.

On social issues, it’s been reported that “HTs ideology is reactionary. HT dictates subservient roles for women, who are required to obtain their husbands’ permission to leave the house and cannot go outside wearing perfume.” HTs doctrine also prohibits participation in other faiths’ celebrations, much to the angst of many of our societies’ religious communities. 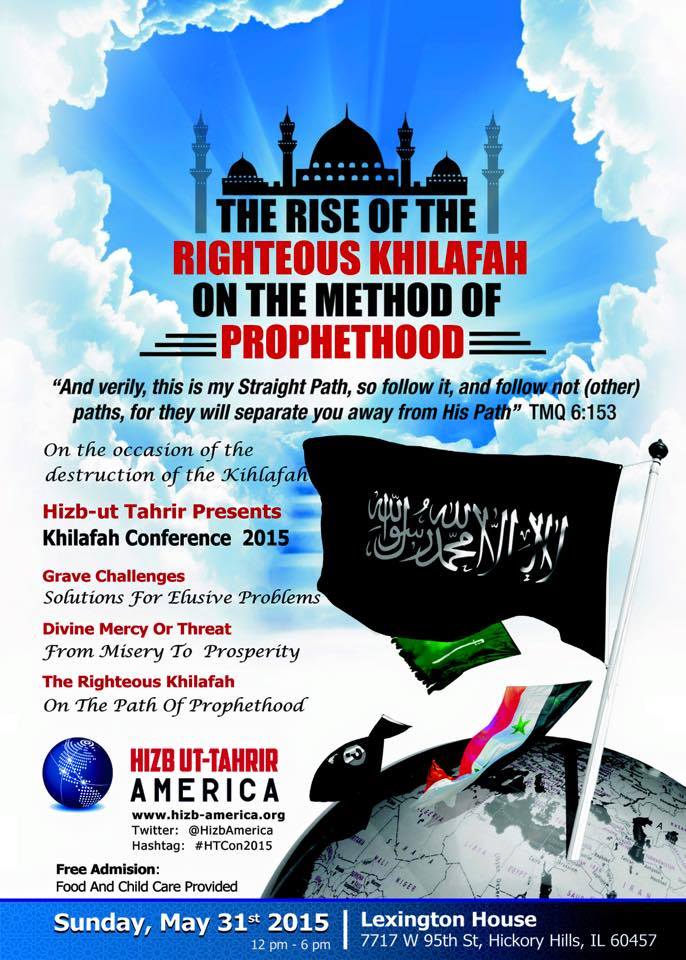 The very essence of a multi-faith society, the concept of which I adhere to, has no place with the likes of Hizb ut-Tahrir. Yet, in North America and in many parts of Europe this revolutionary group, with their seemingly pharisaical Facebook site, remains in good standing. Go figure!