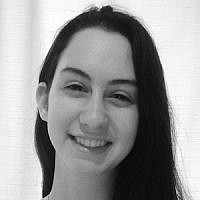 The Blogs
Samantha Blady
Apply for a Blog
Advertisement
Please note that the posts on The Blogs are contributed by third parties. The opinions, facts and any media content in them are presented solely by the authors, and neither The Times of Israel nor its partners assume any responsibility for them. Please contact us in case of abuse. In case of abuse,
Report this post.

I am the product of four Holocaust survivors. My grandparents were held in death camps and imprisoned in ghettos. Last year, I had the opportunity to travel to Poland to see concentration camps and ghetto walls with my own eyes. I felt uneasy about this trip; my grandmother, whom I had lost just a few months before, wished for me to never learn of the suffering she and my other grandparents were put through. But I went, and I came back with an understanding of just how extreme the Holocaust was and how heavily it impacted every Jew around the world.

A year later, I returned from Israel on a Taglit-Birthright trip. One of my group’s first activities was to organize a timeline of Jewish and Israeli history. Throughout history, I learned, Jews have been exiled from many different places and were left with nowhere to go. More recently, just after the Holocaust destroyed about one third of the world’s Jewish population, a much needed Jewish state and homeland was established. I had the opportunity to visit Independence Hall in Tel Aviv, where I sat in the same room in which the official declaration of Israeli independence took place on May 14, 1948. There, I listened to a recording of the ceremony that occurred on that day. The recording concluded with the singing of Hatikvah and a heavy, wholehearted applause. I wanted to clap along.

A couple of days later, my Taglit-Birthright group went to Mount Herzl, Israel’s national cemetery where those who lost their lives defending Israel are buried. My group was touched by stories about how fallen soldiers, including American volunteers, were honored and appreciated by the Israeli Defense Forces as well as the entire nation. After leaving Mount Herzl, my group went directly to Yad Vashem’s Holocaust History Museum. I again felt uneasy about seeing and learning more about the Holocaust, but I learned that as a Jew it is important to learn where I come from and appreciate the freedom and homeland that we Jews have today. After seeing physical history in Poland and learning about my own family history, I appreciated the authentic and educational information that Yad Vashem supplied. I was surrounded by a group of friends, many of whom were learning about the details of the Holocaust for the first time. It is safe to say that most, if not all of us, came away from this day with a new, stronger appreciation for the state of Israel.

Today, Israel’s Jewish population consists of survivors and refugees from all over the world. From my own family history, my trip to Poland, and my most recent trip to Israel on Taglit-Birthright, I learned that, throughout history, Jews have been constantly persecuted, often with nowhere to safely call home. As a direct product of this persecution, I appreciate the Jewish state as a home for the Jewish people.

My grandmother never uttered a word about the Holocaust, but her face always lit up when she spoke about Israel. She would tell me about how happy she was when she saw Jews dance with pride after hearing the news that Israel had finally been declared a state. “They used to teach Yiddish to Jewish children. Now they teach Hebrew! Because we have Israel,” she told me. She was very happy to know that I can speak Hebrew and even happier to know that I can comfortably visit Israel. The fact that Israel became a state just after the conclusion of the Holocaust allows me to understand just how significant it really is that I, along with every Jew, can appreciate and spend time in the Jewish homeland of Israel.

About the Author
Samantha Blady is an undergraduate student at Brandeis University from North Woodmere, New York. She is the granddaughter of four Holocaust survivors and recently traveled to Israel with Taglit-Birhtright.
Related Topics
Related Posts
Comments