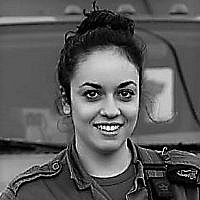 The Blogs
Aviah Danino
Apply for a Blog
Please note that the posts on The Blogs are contributed by third parties. The opinions, facts and any media content in them are presented solely by the authors, and neither The Times of Israel nor its partners assume any responsibility for them. Please contact us in case of abuse. In case of abuse,
Report this post.

I grew up in Bnei Yehuda, a town in the Golan Heights, with endless nature and breathtaking views. Before I was drafted into the army, I often wondered what my role would be, how my two years in uniform would look. I never could have predicted that I would serve in the region as a soldier, and not just any soldier. Today I am a paramedic in the 474 Golan Regional Brigade, which protects Israel on the Syrian border.

Between imagining my years in uniform, and serving on the Syrian border, I spent three months in the IDF paramedics course. I worked hard to earn my place in a unit whose sole purpose is to cherish and preserve human health and life. I learned about the basic care that soldiers must receive to maintain their health and strength. However, the main focus of the course was saving human lives. At the end of the course, I was certified to treat wounded and act in times of emergency; I was assigned to serve in the Golan Regional Brigade.

Part of our work as paramedics on the border with Syria is to provide humanitarian aid, including treating the wounded who often come to us from across the border in critical condition. The Syrian civil war has has been raging for more than five years, and we have seen the media pictures and read the news of innocent children and women swept up in the conflict. But, although I grew up just miles from the Syrian border, I had no direct, personal contact with this tragedy.

The first time I was required to apply all the skills I learned in paramedics course was when I came face to face with a 10-year-old Syrian boy who had been wounded in an explosion.

He met us with eyes full of fear and shock — physically hurt, confused by the chaos around him, unfamiliar with the place and the language he was hearing. The medical team, including myself, gave him the initial intervention he required and reached out to comfort him. By the end of the treatment, he looked up and shared a weak smile, but a smile nevertheless.

This was my first time working as a paramedic in an urgent case. It was also the first time I felt the deep pride of serving in my role, a role whose purpose is to help and heal another, with no judgment or prejudice.