A few hours ago I lost my bid to unseat Congressman Bill Pascrell in New Jersey’s Ninth Congressional District. But, thank G-d, I’m in a good place and miraculously in a good frame of mind. I’m writing this late at night to capture my thoughts and feelings after investing approximately seven months of my life in this endeavor.

Firstly, believe it or not, I don’t feel sadness but contentment (although I can’t predict how I’ll feel in the coming days). Why contentment and relief? I set out to accomplish certain goals and though I wish I had been more successful at advancing them, I feel we met many of those goals and I’m grateful to G-d for having made it through the campaign with a positive message.

First, I wanted to be a voice for universal Jewish values in politics. For years I had felt America was becoming obsessed with talking about gay marriage rather than heterosexual divorce; abortion rather than men respecting women and replacing the recreational nature of sex with something of its sacredness; contraception rather than the joy of children. I wanted to bring something of the joy of Jewish values to supplant some of the austerity of the Christian social sexual values which have come to dominate our social discourse and divide our nation.

I also wanted to run an ideas-based campaign that focused less on fundraising and more on novel policies that could address the values rot in American culture. I didn’t want to talk only about economics, deficits, and national debt, but the value of human dignity that accrues through self-reliance, self-sufficiency, and economic independence.

Most of all, I wanted to demonstrate that religious Jews, running campaigns based on Jewish wisdom and values and founded on a platform of a proud Jewish identity can compete as viable candidates in politics and in every other sphere of American life. From the constant, positive, national attention our campaign has, thank G-d, garnered, we have shown that being an orthodox, committed Jew is not in any way a hindrance or limiting factor.

I knew from the beginning that running in a race where democrats outnumbered republicans four to one was like climbing a political Mt. Everest. But it was the journey that mattered.

And here is what I have learned. Running for public office has a profound maturing effect on one’s character. You have to wake up every morning and figure out how you will maneuver to deliver your message through all the noise and clutter of the media and the friction of politics. It toughens you up and sharpens your instincts. It humbles you and makes you utterly dependent on all the people around you. People you might, in your arrogance, have otherwise overlooked are now your masters. Every single one matters. And whether they embrace you or reject you, it is always they who are important with you being subordinate.

Abraham Lincoln, on a day that happens to be my birthday (November 19), gave the Gettysburg Address where he spoke of government of the people, by the people, and for the people. For once, I wanted to experience what it was like to be “of the people.”

Never once in my campaign did anyone make me feel that being a Rabbi meant I could not be their candidate. True, many of the Arab-Americans in our district challenged my position on Israel. But they always did so with respect and hospitality. (Please read my column on all the people I met in the race).

The Republican Party, which suffered a huge defeat on so many levels tonight, needs to make some serious changes. They cannot highlight the social sexual issues which distract us from fixing so many of America’s real social problems, like the increasing narcissism on the part of our youth, a catastrophic divorce rate, the portrayal of women in much of the media as a man’s plaything, the absence of a year of national service, the increasing loss of intellectual curiosity on the part of much of the electorate as shallow reality TV shows make us think less, and our addiction to material objects to bring us happiness.

We also have to deal with immigration in a compassionate and sensitive manner. True, people who come here illegally are breaking the law and being unfair to all those who wait to enter by legal means. But before we throw the full book at them – and let me be clear that they should not be breaking the law – let’s at least understand that so many of them do so to feed their babies or to send money back to very poor families. They are breaking the law, but that does not mean that they are criminals in the usual sense of the word. Their humanity has to be preserved at all times and we have to find a way to deal with 12 million undocumented workers, many of whom have made America their home for many years. Not to address this problem is not only to risk further electoral defeat, but it is to compromise our values of compassion, even as we rightly insist on the vital framework of law. 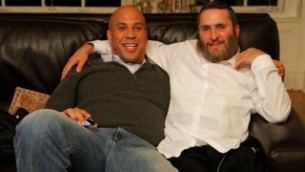 At home with Mayor Corey Booker

Finishing my campaign with a positive energy and dignity, even as I keep the door open to the possibility of further political involvement, also allows me to put some of the unavoidable awkwardness of partisanship – much as I have tried to avoid it – behind me. Two hours after my defeat my dear friend and brother, Mayor Cory Booker of Newark, came to my home to hang with me and cheer me up. We had a great time discussing all the things that connect us, like a deep love and spiritual friendship of twenty years, without politics being on the agenda.

Now is the time for America to come together and fix its problems. I fought hard against Bill Pascrell. But when I called him tonight I told him he will be my congressman and I bow fully to the majesty of the magical democratic system under which we are all so privileged to live. Likewise, President Obama continues as my President. I don’t agree with both men on many things. But I will work with them to create an America that is unified and that is fully focused on being the light of liberty, prosperity, and freedom to every corner of the earth.

God bless all of you and God bless America.