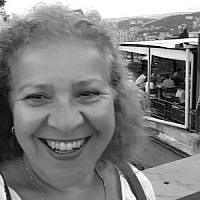 The Blogs
Inna Naroditskaya
Apply for a Blog
Advertisement
Please note that the posts on The Blogs are contributed by third parties. The opinions, facts and any media content in them are presented solely by the authors, and neither The Times of Israel nor its partners assume any responsibility for them. Please contact us in case of abuse. In case of abuse,
Report this post.

A high-pitched adhan, the Islamic call for prayer, overlays with the voice of a woman teaching sacred Hebrew words to children who repeat her lines.  A piano is carefully unloaded as we approach a clubhouse in Offra, one of the oldest settlements in the West Bank.

We are a group of 20 professors from different countries and academic fields selected by the Schusterman Summer Institute of Israel Studies. Flying to Israel from Canada, Brazil, Delhi, Prague, Los Angeles and Chicago, we historians, anthropologists, specialists in art

classes on Israeli studies in our own fields.  In my case, Israeli music.

Why Brandeis? The university was founded in 1948 – the same year as Israel.  The newly established state gathered survivals of Holocaust and Moroccan Jews.  Brandeis was a response to disparaging quotas imposed on Jewish youth at Princeton, Yale, Harvard and a large number of other American schools.  From the start, Brandeis refused preferential treatment of Jewish students, giving all its students opportunity to study various subjects including ones on Jewish and Israeli topics.  In the 1950, the school opened a department of Near Eastern and Judaica study – the second after Hebrew University in Jerusalem, pioneering the academic fields of Jewish and Israeli studies in North America.

Beyond analyzing melodies, chords, and complicated rhythms, an ethnomusicologist, I explore the politics of performance — a political speech as a production, a state parade a spectacle that combines theater and politics.

In Jerusalem, along busy

, exciting, never-sleeping Ben Yehuda Street, I pass a Jewish Orthodox playing rock music; a classical violinist; singing Russian puppeteers; a Jewish Ethiopian drummer, and about a dozen other groups (recorded by the author of this blog). 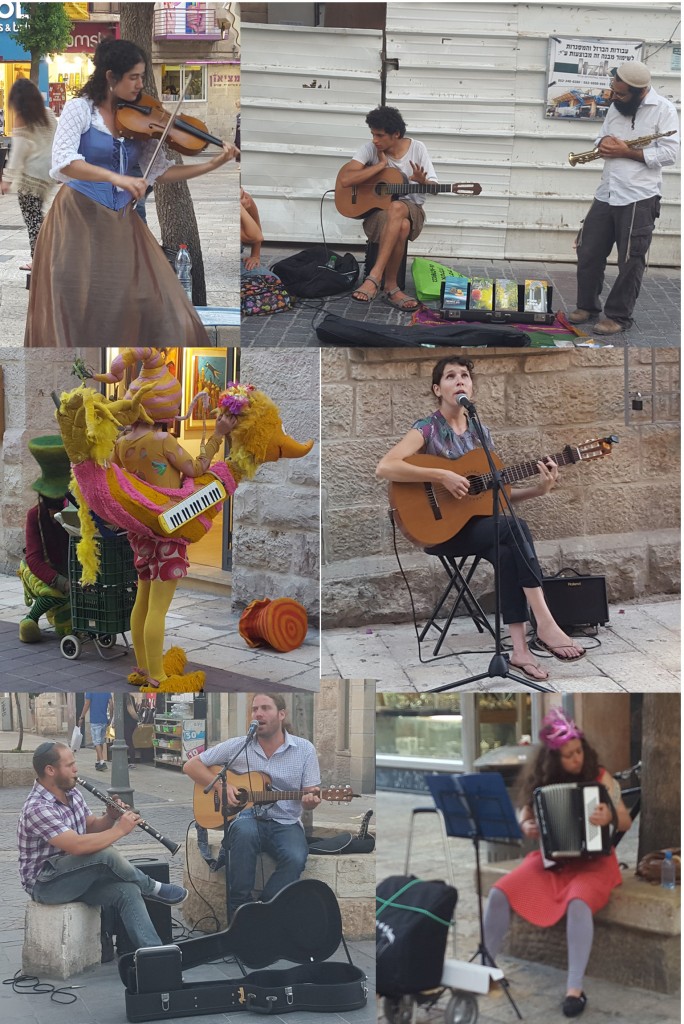 A few hundred yards away in the Old City, the air vibrates with prayer coming from mosques, a somber choir from an Armenian church, the chants of Greek Orthodox services, the overlapping soundscape of five denominations hosted in Church of Holy Sepulcre, and the murmur of praying Orthodox Jews; people looking modern and ancient, some dressed in attire that rolls back a century or a millennium.

It is an ancient land and a young country born from the ashes of the Holocaust and a long history of European anti-Semitism. It is the center of the ongoing conflict with Arabic

minority within Israel and Arabic

population outside (over 70 times the Jewish population of Israel.) A 67-year-young country which according to Yedidia Stern (the Israel Democracy Institute) acts as a teenager, assembled a striking racial, social, linguistic, religious patchwork of its Jewish population.

The birth of the state told through music might begin with early 20th century Zionist songs of Jews escaping from the Russian Pale of Settlement to settle in Palestine. Early kibbutz tunes

echo enthusiastic marches of Soviet youth who likewise pioneered collective farms. In the first known classical concert in a kibbutz, Jascha Heifetz, the great American violinist born and raised in the Russian empire, played before his former compatriots who had migrated to Palestine. This took place decades before Israel was founded.

.  In the middle of 1930s, when Nazis set in motion the extermination of European Jewry, violinist Bronislaw Huberman recruited

“the best Jewish orchestral players” with their families, saving

more than 1,000 people and founding the Palestine Symphony (renamed the Israeli Philharmonics after the establishment of Israeli in 1948.)

To be sure, Israel’s most difficult problem is the tangled conflict between Muslims and Jews. The blast of frequent wars, conflicts and terroristic acts seem to doom peace deafening this region.

Khaled Abu Toameh, a Palestinian journalist who lectured to our group about on Palestinian politics, believes a peaceful solution unforeseeable for three reasons: leadership, public education, and a common myth.

According to Toameh, no Palestinian leader has had a mandate from both its own population and Arabic

Islamic states to complete negotiation with Israel. He said the second and third generations of Palestinians raised with the notion of Israel as the mortal enemy of Arabs and Islam would find any leader making peace with the evil a traitor. A majority of Palestinian Arabs believe that demographically they will outnumber Jews, thus finding a half-pie two-state solution unsatisfying.

We also met with members of the Israeli Knesset, some ready and willing to compromise in the name of two states, others hardcore opponents. 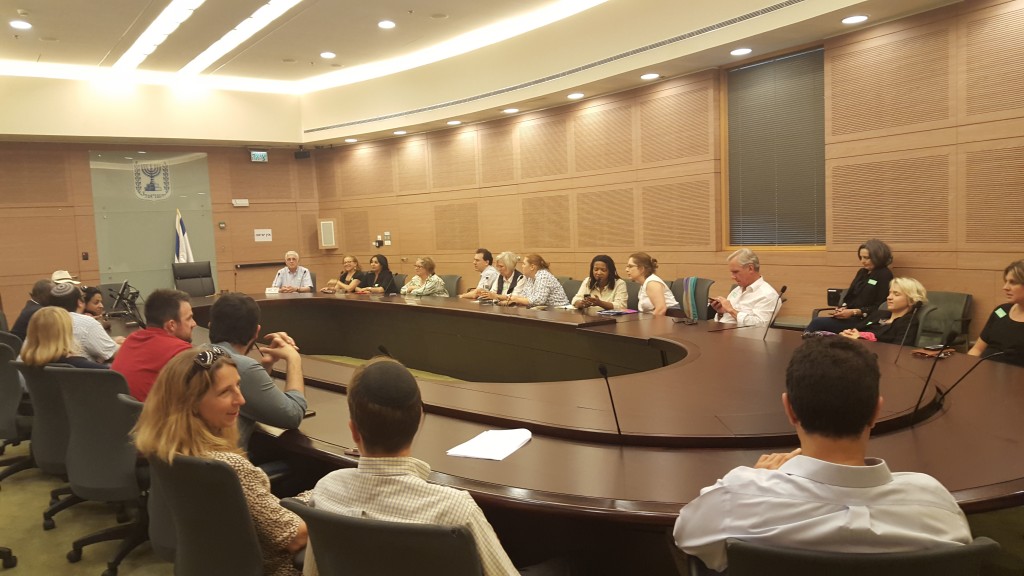 At the head of the table is Ilan Troen, the Israeli and American scholar, founding director of the Schusterman Summer Institution for Israel Studies. He leads he last group of Schusterman Scholars before retiring from this position.

The cacophony of public voices, political, ethnic, religious at times makes sound indiscernible.  But the musical soundscape gives a different hope.  It can invigorate conflict or create unlikely alliances.  A beautiful female singing duo, Noa and Mira Avad, who are a Yemenite Jewish Israeli and Arab Israeli, perform their signature song, “There Must Be Another Way.”

A Yemenite Jewish transgendered pop singer, Dana International, also known as Saida Sultana, is a native speaker of both Hebrew and Arabic.  Before winning

the Eurovision Song Contest with her openly pro-gay 1998 song “Diva,” Saida Sultana’s cassettes gained a large following in Egypt. This led to the accusation that Israel corrupts, “penetrates . . . like a plague” innocent Arab youth.

Also, Druze, Circassians, and Bedouins navigate their identities and their alliances in multilingual state.  Rafiq Halabi, Mayor of the Druz Center (Dalyiat el-Carmel), talks about fiery Druze dance, dabke, shared by Druze in Israeli, Syrian, and Lebanon. It is Halabi’s way of telling that despite cultural unity, each Druze community remains loyal to its country.

And there are so many more. Idan Raichel is an Israeli born,  well- trained keyboardist, composer, and a student of world music. Raichel assembles a multiethnic group of superb performers.  His fusion of Ethiopian, North African, Latin American Jewish, and Arabic musics and languages can be seen as the work of a Jewish Orientalist – for one who does not walk the streets of Jaffa, Tel Aviv, Haifa.

Sound conquers the space, maps and reshapes it.  Music celebrates people’s complicated coexistence.  My hope is that the complex musical microcosm densely woven with pluralism of ideas in Israel will reach our students and beyond, our empathy translating into their compassion and finding sensitive ears.

About the Author
Inna Naroditskaya was born and educated in Baku. She gained her PhD at UMichigan, was formerly a performing pianist, and is currently a Northwestern professor. Inna is the author of several books including Bewitching Russian Opera: The Tsarina from State to Stage (Oxford UP), Music of the Sirens (Indiana UP).
Comments