In the US, they did not detect and did not demand lockdown for months. Their number of deaths from COVID-19 is staggering.

In Israel, the government took ‘harsh’ measures. Actually, all the time, it balanced the most extreme health demands with the most minimalist economic demands. It never went as extreme (and inhumane) as China, which had something like 50,000 death, is now claimed. Israel escaped with a few over 200. Fantastic! So well done!

Not for a growing number of bloody publicity-seeking university teachers in Israel. Unscrupulous number guys, economists, and a token medical expert trown-in team up to spread the word that the Israeli lockdown killed the economy and saved ‘but’ 2000 lives.

They advocate themselves as ‘scientists, not politicians.’ They are not only ruthless; they are lying. Don’t be impressed or fooled by their smart tricks.

They are different from magicians. A good magician doesn’t claim to show you his secret powers. You know he’s fooling you. And he’s good at it. These scientists have no regard for truth. They lie in our faces. Lock Them Up. Fire them. Why should we finance the salaries of thieves and liars?

Why does a respectable news outlet like the Times of Israel let them spew their money-grabbing slander? The truth is that almost all journalists are language people who in general are blind for math. You can tell them anything beyond 2+2 and they’d believe it. As long as it ‘sounds’ smart.

Without lockdown, Israel would have had ‘just’ eleven times more deaths than Sweden, these scientists claim. Or, 1000% more, which they consider insignificant! First of all, they would not be my doctors of choice!

Surely, closing all hospitals would be much cheaper and in the end, all people die so there are no losses in lives. Most people find that immoral and unacceptable but that is what greed can do to smart people.

But that’s not all of it. They compare Israel, that in a few lousy weeks, managed to slow down the epidemic, to Sweden. But the latter has done the same as the UK and the US: waiting months before ordering lockdown. (They’re still hesitating.) Their situation is about to explode. It won’t stay at 1000%. In a few weeks, it will be 2000%.

Look at the real trends and compare Israel to Sweden. They come from the fantastic site Worldometers or in particular, its COVID-19 page which is constantly updated with the newest numbers. 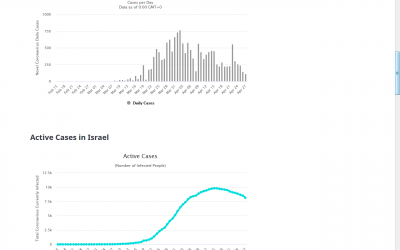 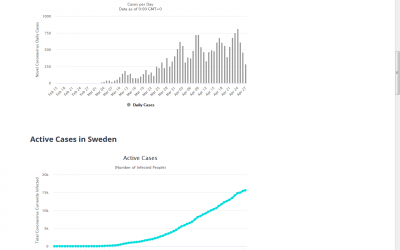 In Israel, the epidemic is clearly tapering off. In Sweden, the sh*t just hit the fan. You don’t want to live in Sweden at the moment.

Even population-dense New York manage to bring the numbers down in a couple of weeks lockdown. But what price do they pay for not starting early! (They didn’t know. Trump fired his China epidemiologist who could have warned them. Prevention costs money.) Tens of thousands of deaths.

Israel did a fantastic job. And most people understand. So many unpopular measures did not raise the number of attacks on the government. It rather led to a unity government with parties trampling each other to get in.

True leadership is doing what is needed, not what is popular or cheap.

Beware of murderous scientists, out to make a cheap buck by playing with your mind. A Dutch expression for ruthless people is, they walk over corpses. My father used to say: They’re worse. They step on the living.

Postscript 20 hours later: As I predicted, sadly, the full disaster in Sweden is now becoming clear with the highest fatality rate in the world of 12%.