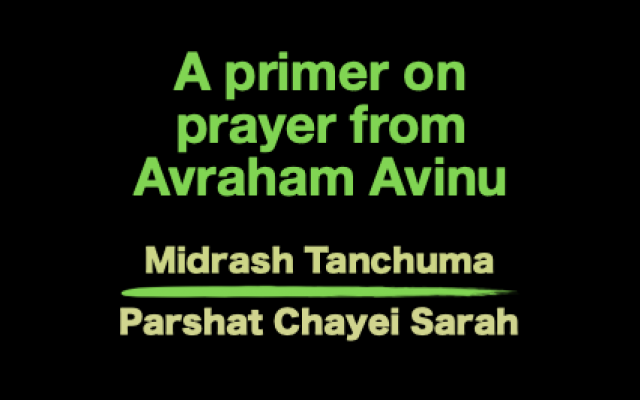 Avraham’s spiritual legacy to the Jewish People and the world is immeasurable. However, since in our parsha Avraham is, for the first time, described as זָקֵ֔ן, elderly, the midrash focuses its attention on this stage of life. What is so unusual about Avraham growing old? It seems that Avraham had no signs of old age, rather he asked to look old. That incident came because of Avraham’s unique perspective on prayer. Therefore the Midrash starts with the topic of prayer.

As is often the style of Midrash Tanchuma, a topic is introduced with a question of Jewish law – are you allowed to pray while riding on a camel? Rav Yochanan says that the guiding principle is that in order to pray you must feel that דַעְתּוֹ מְיֻשֶּׁבֶת עָלָיו you are at peace, meaning, that there is nothing distracting you. Abba Shaul promises that if you can reach the proper state of כוונה (concentration), your prayer will be heard. And no one reached the level of concentration as much as Avraham. (Midrash Tanchuma Parshat Chayei Sarah, 1:2).

Now you would expect five tips on prayer that we can learn from Avraham. Instead, the Midrash focuses on Avraham’s plea to spare Sodom and Gomorrah:

What does arguing with God in order to save the wicked inhabitants of Sodom have to do with praying with concentration? Apparently everything. That is, as long as you redefine and reimagine what effective prayer is all about. Rashi already noted that when Avraham approached God to question the destruction of Sodom the Torah used the word וַיִּגַּ֥שׁ “And he approached” (Ibid 18:23). This phrase can be used to connote confrontation, appeasement, or prayer. Rashi says that in this case, it was all three. Perhaps the Midrash is telling us that confrontation is a critical part of prayer. State your case to God with honesty, sincerely, and determination.

How old age was born

“You (have a sense of morality that) is more beautiful than anyone else’s; your speech is endowed with (inner beauty and) grace; That’s why God has given you an eternal blessing”(Tehillim 45:3).

אֵי זֶה הַיֹּפִי שֶׁלִּי “This beauty is not mine” because my son, Yitzchak, and I look exactly alike. Avraham prayed that he would look his age and in our parsha he was granted his request –  וְאַבְרָהָ֣ם זָקֵ֔ן “and Avraham was old” (Ibid 24;1).

Aligning your goals with God’s

A commentator to the Midrash, Kol Haremez, (Rabbi Mordechai Zeev) sums up Avraham’s approach to prayer and wisdom. The definition of praying with maximum concentration is achieved when דעה וכוונה אחת עם הבורא “your goals and intentions are in perfect harmony with those of God” (Kol Haremez on Midrash Tanchuma Chayei Sara 1:2). Avraham had no personal gain in sparing Sodom. Rather, Avraham’s only goal was to keep the world going and to spread a recognition of God’s righteousness and justice in the world.

In our society people go to great lengths to look younger, yet Avraham prayed to look like an old man.  He thought that God’s glory can spread more easily when young people can learn from the wisdom and experience of the old. Therefore we have to single out old people by having them look their age. Once again, Avraham aligns his goals with God’s.

Maintain productivity in your old age

The Midrash also delves into the fact that Avraham had more children in his old age. It’s an important lesson that a person should strive to maintain their creativity and productivity as they age. A most dramatic example of this, which changed the course of Jewish History, is the story of Rabbi Akiva. He  lost 24,000 students but it did not break him. He went on to have 5 more students and from these illustrious students the “מסורה” transmission of Torah was able to continue to the next generation. It’s no wonder that Rabbi Akiva himself is quoted in the Midrash:

“Rabbi Akiba said: ‘In the morning sow your seed and don’t hold back from planting in the evening.’*(Kohelet, 11:6) means that if you have trained disciples in your youth, you should not cease to do so in your old age’” (Midrash Tanchuma Chayei Sarah,6:7).

How to pray and how to age. Two more facets of our vast legacy from Avraham avinu.

“Rabbi Akiva says if one studied Torah in his youth he should study more Torah in his old age; if he had students in his youth he should have additional students in his old age, as it is stated: ‘In the morning sow your seed, etc.’ (Ibid) They said that Rabbi Akiva had twelve thousand pairs of students in an area of land that stretched from Gevat to Antipatris in Judea, and they all died in one period of time, because they did not treat each other with respect. And the world was desolate of Torah until Rabbi Akiva came to our Rabbis in the South and taught his Torah to them. (This second group of disciples consisted of) Rabbi Meir, Rabbi Yehuda, Rabbi Yosei, Rabbi Shimon, and Rabbi Elazar ben Shamua. And these are the very ones who upheld the study of Torah at that time’’’ (Talmud Yevamot 62B).

About the Author
(Almost 100 Midrash Video summaries can be found on my youtube playlist: https://www.youtube.com/playlist?list=PLynSVeS5_iNhHleKroA6r3br-bmaHQigk) After college and Semicha at Yeshiva University my first pulpit was Ogilvy where I wrote TV commercials for brands like American Express, Huggies and Duracell. My passion is Midrash Tanchuma. I am an Architect of Elegant Marketing Solutions at www.mindprintmarketing.com. We are living in (where else) the Nachlaot neighborhood of Jerusalem.
Related Topics
Related Posts