The Blogs
Sam Litvin
Apply for a Blog
Advertisement
Please note that the posts on The Blogs are contributed by third parties. The opinions, facts and any media content in them are presented solely by the authors, and neither The Times of Israel nor its partners assume any responsibility for them. Please contact us in case of abuse. In case of abuse,
Report this post. 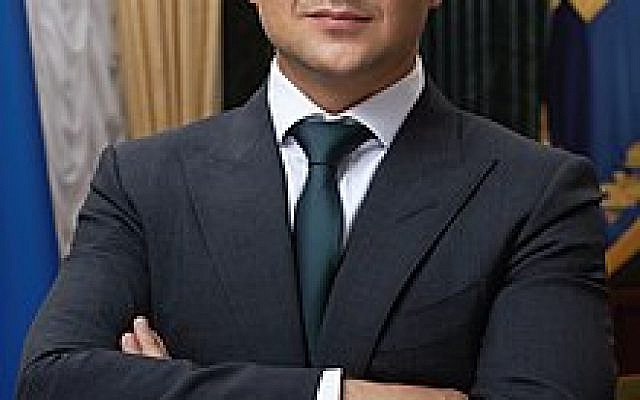 Image from Wikimedia and official portrait. President website not accessible due to Russian cyberattack.

In 2019 Ukraine elected a Jewish president. In 2022 Putin justified his invasion of Ukraine with the claim that the country is run by Nazis. While there are elements of neo-Nazis in Ukraine, the same can be said for Russia and most any other nation. It certainly cannot be said that the Ukrainian government or population as a whole have Nazi ideologies.

So how can Putin say that Ukraine is run by Nazi drug addicts and Russians actually believe him? For that, you would have to go back to the founding of Soviet Union and World War II.

The Soviet Union was an egalitarian place compared to the Russian Empire during which Jews were confined to the Pale settlements, faced constant pogroms, had children taken and put into Russian re-education schools, and Jews had no right to positions in the government.

Because Soviets were opposed to any religion or ideology that competed with Communism, the Jewish religion was outlawed and so Jews were seen as only an ethnicity, something that was stamped into their passport. Even a half-Russian/half-Jew like my mother had to choose if she was a Jew or a Russian in her passport.

However, the non-religious Jews who assimilated were allowed to get an education and rise in the party. The problem was that just as it occurred in Europe, allowing Jews to have rights resulted in the quick rise of Jews into the middle class and positions of influence which created fear and resentment. Because of this fear and resentment, Stalin quickly implemented racial quotas for Jews in education and official positions. As a result, many capable Jews found themselves passed over for promotion year after year. This is how my grandfather after four years in the army during the war did not see his rank increase in spite of the many contributions and actions he undertook that warranted rise in rank and why my grandmother was stuck in a vice-head doctor position for decades.

With that, we come to 1945. By this point, Soviet soldiers are the first to free concentration camps and see the extent of the anti-Jewish mentality of the Nazis. They see how the defining core of the NAZI party is anti-semitism. The problem of course is that Soviet rule is also antisemitic and so they have to decide if they will have their party agree with the core principle of the Nazis they just defeated.

There was also the problem with the fact that nearly all of the new states in the new post-war Soviet Union were also highly antisemitic and in fact, many of their people actively contributed to killing Jews in the Holocaust. The way to solve this problem was to ignore it and deny it.

The mantra became that Germans were fascists, not Nazis. Any talk of the Holocaust and Nazi atrocities against the Jews was banned. Jews who had their families murdered by their neighbors could not get justice and it was unpatriotic to even mention the fact that Jews were singled out or mass murdered. The official reality was that all Soviets suffered, all lives mattered, no one could complain any more than others.

This of course became even more serious after 1948 when the Jews of a socialist Palestine decided to become a capitalist Israel. The Soviet Union began funding and arming the Arab states and antisemitism for the first time became antizionism, making Holocaust denial that much easier. Jews were even more ostracised and hated. Many were sent to concentration camps or to live in Siberian Berobedjan. Yiddish was banned and Jewish writers were wholesale murdered.

And that’s how we come to today, where you can have a Jewish president of Ukraine, elected by the majority of Ukrainians, and the majority of Russians believing Putin that Ukraine is a country run by Nazis and drug addicts. It is amazing what a little denial of information and miseducation can do, especially when most information is in English, a language that most Russians cannot read.

This should make Americans pause a little more when nearly half of Americans don’t know about the Holocaust and American schools ban books like Maus.