The Blogs
Saurav Dutt
Apply for a Blog
Please note that the posts on The Blogs are contributed by third parties. The opinions, facts and any media content in them are presented solely by the authors, and neither The Times of Israel nor its partners assume any responsibility for them. Please contact us in case of abuse. In case of abuse,
Report this post.

I am not Jewish but even from my vantage point as an ethnic minority in the maelstrom of political discourse it’s clear to see that recently there has been an uptick in anti-Semitism within that discourse, within society on a wider basis and certainly in the rise of incidents of abuse and hatred against Jews in the United Kingdom where I reside. Invariably it has come from leftist or “right-on” proponents, with comments about all Jews being rich or hating Muslims. I really don’t think most “modern” anti-Semites realise that they are being racially prejudiced.

The sooner the left (and it is usually a problem among the liberal left, usually, not exclusively though) admit there IS a problem which is far more widespread than elements of the Labour party in the UK would care to admit, the better. Strange that this problem is present among those who usually claim to be the anti-racists, so we have to posit whether anti-semitism is the acceptable form of racism for them.
Reading about the rise in incidents of antisemitism by 11% in the first six months of this year compared with the same period in 2015 gave me cause for surprise and my total surprise that this sort of thing still takes place speaks volumes of my naivety. I had no idea such prejudice still exists and that there are those who think nothing of blurting it out loud.
Hideous. I would very much like to have stayed naive.

The recent accusation of a smear campaign against the Labour Party holds up when the implication of those part taking in the campaign imply the problem doesn’t exist or isn’t as bad in other parties or the rest of society.

The worry about the current resurgence is that people who in other terms think themselves liberal and tolerant feel that they can vent their deep seated prejudice because of taking sides in a territorial conflict elsewhere in the world.

Unfortunately, if anything the spread of Islamofascism has multiplied anti-semitism 1000 fold in the past few years. The danger is that those on the Left all sign up without much thought to the notion that Jews don’t deserve to have their country but anyone else deserves their country. The notion that Israel is not legitimate but Palestine is, is clearly at root deeply racist and runs counter to the history of many thousands of years. The notion that Palestinians should be allowed to live in Israel or Palestine territories is a not in question, they already do, and those that left should be given Israeli and Palestine passports and immediate right of return. Only if a broad return is allowed for all exiles can peace be restored. But to pretend that Israel is Palestine? Well, clearly that’s just giving all the rights to create land given by the British and Ottoman imperialists and is a partial and unjust view of history.

The Left have long smirked at the Conservative Party over their bigots, have long had a far too self-righteous air, even as it happily invited people into the party for which “anti-Zionist” was merely a lightly coded form of anti-Semitism, and that’s not even counting the fact that the British Left has, historically, had its share of anti-Semites.

The Left has spent a century mythologising itself as the pure political movement, the political movement that had expunged prejudice, but that’s all it was, a myth. That the political opposition is seizing upon that to win the London election, or more broadly shift voters’ gazes from its own civil war, well that is to be entirely expected. Labour would do the same in its turn, and under the right leader, Boris Johnson and his “half-Nigerian” comment would be the topic of conversation today.

But the accusation of anti-Semitism in Labour ranks isn’t just hyperbole or political invention. Labour has been warned for years that there were elements in the party who were espousing anti-Semitic attitudes. And if Ken Livingstone’s and Naz Shah’s comments do not demonstrate, and if the apparently 50 Labour councillors’ public utterances don’t prove it, then read countless forums over the internet in the United Kingdom as Labour supporters defend the indefensible by merely making the same arguments over and over again.

And let’s not forget the back-handed compliment style of anti-semitism.
Comments such as the one I heard once said by a woman attending a multi-faith event “Oh I don’t know why people are so horrible to the Jews. They are such good businessmen and help the economy such a lot…”

Which as someone said to her in response, is the same as saying “I love black people. They are so good at dancing…”

Antisemitism has always been much more of a conspiracy theory about power, with the Jews as the convenient scapegoat for whatever is wrong in the world at that particular moment. It’s why it’s been so easy for elements on the far left to pick up antisemitic tropes, sticking “Zionist” in where the word “Jew” or “elder of Zion” would have been, often apparently oblivious to their genesis.

Being constantly defined in opposition to, as other than, the self-defined mainstream, being insulted throughout your life because of who you are, is psychologically damaging. To be free from that – to be able to think of yourself as just a person, without the prefix and its historical load, is incredibly liberating.

About the Author
Saurav Dutt is a published author, lawyer and political columnist who has written for IB Times and been featured in The Independent, Sky News, BBC and more.
Comments 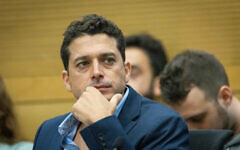