Let’s face it, folks. He may be down in the polls, but Trump could win again.

If you are like me, when this happened for the first time four years ago you were plunged into weeks of shock, despair and depression. 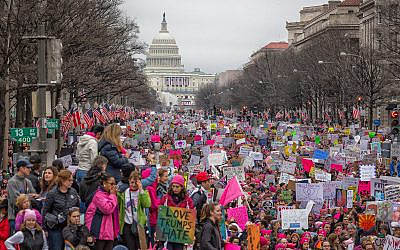 Then, the day after the inauguration came the women’s march in Washington. It was so joyful, so peaceful. The signs said things like, love trumps hate. I felt such pride and hope watching that, I thought maybe everything was going to be OK. America knew how to handle this. America knew how to heal from this.

Wow, that was a long time ago. Americans are more divided now than at any time in my lifetime. Anger seems to be everywhere. People just can’t talk to one another. It’s even affected the Jewish community with Orthodox and non-Orthodox Jews sorting more firmly into pro and anti-Trump camps. As Joshua Shanes wrote in a recent Tablet story “affection for Trump almost seems to be expected among Orthodox Jews.“

I felt a lot of common ground reading Shanes’ piece, especially when he wrote of wanting to find a Judaism that is both deeply committed to halakha and to social and racial justice: “A pocket of us crave a Jewish community equally committed to the prophets and Halacha, a community committed to fighting racism and hate-mongering, committed to social policy that protects the vulnerable—because Judaism requires it of us—and also supports Sabbath and kashruth observance.”

But when he wrote that he feels that the Orthodox move to the American political right is “profoundly anti-Jewish,” he left me behind. Seriously, folks, we have to stop doing this. We have to stop looking at our fellow Jews and judging them to be worse Jews than we are. I’ve seen this so many times among my social media friends during this Covid-19 crisis. Don’t the Orthodox believe in pikuach nefesh anymore? they say in response to stories about the ultra-Orthodox flouting Covid-19 rules.

Pikuach nefesh (פיקוח נפש). Few would dispute that this call to preserve human life  is one of the highest values in Judaism. But nowhere is it written that pikuach nefesh requires people to wear masks or to avoid going to weddings during a pandemic.

Yes, it is hard for me too to watch the ultra-Orthodox disregard the pandemic rules whether it’s to attend prayers, weddings or funerals. I understand the kind of anger we see in this Ynet opinion piece where the author blames the spread of the virus in the Israeli ultra-Orthodox community on “hubris and a complete disregard of reality” from both the community members and its leaders.

But, please, don’t accuse them of not knowing what pikuach nefesh is. Don’t accuse them of being bad Jews. Give them the benefit of the doubt, judge them with the proverbial כף זכות/kaf zchut. Start with the assumption that they would only increase the risk to their lives if they truly believed that some other risk — a risk to their souls perhaps — was even greater if they gave up the centers of their spiritual and social lives. Don’t succumb to the temptation to hate them, to feel only anger. Because that will eat at your own soul, and maybe even affect your own body and hold on life.

How can we do that? How can we remain activists while having empathy for our opponents? One path is to stop thinking so much in terms of bad people and more in terms of bad forces. We should stop so much debating who is a racist and who is an anti-semite and who’s an anti-Semite, and instead focus on fighting the forces of systemic racism and anti-Semitism.

Is Trump a hero for the Jews or is he an anti-Semite? That kind of debate leads us nowhere, it just leads to us being divided even more. No one’s mind is changed by this kind of debate.

But we have more of a possibility of a dialogue if we instead focus on acts and forces. Is this act of Trump’s serving or not serving the interests of Jews? Is this statement of Trump an expression of the forces of racism and anti-Semitism that flow throughout society or is it something else? We can talk about these things.

Life will go on if Trump is reelected. I share the fears many others have, the fear that America will descend into some kind of civil war or authoritarian regime if he gets another four years. I am afraid. I am afraid too that those things might happen even if Biden is elected.

But there is hope for healing. That first women’s march of the Trump era should serve us as a guide. Resistance can be expressed with joy, not just with anger. We must find a way to dance and to love even while we resist. This is part of what profound non-violence is all about, about trying to be not just non-violent in our interactions with others, but also within our own hearts. This is the path to healing. And shalom.