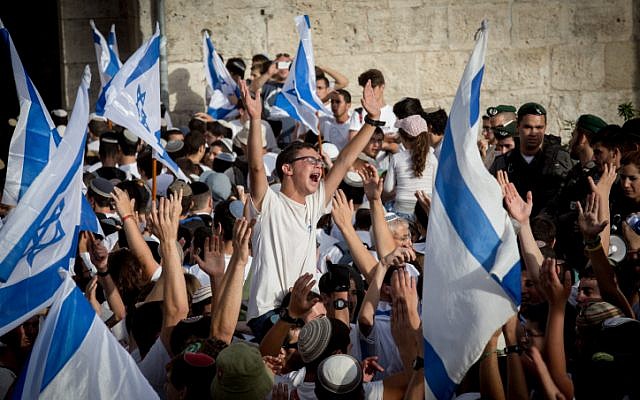 Illustrative. Thousands of young Jewish boys wave Israeli flags as they celebrate Jerusalem Day, dancing and marching their way through Damascus Gate on the way to the Western Wall of Jerusalem's Old City, June 5, 2016. (Nati Shohat/Flash90)

And I can’t express how grateful I am that we did.

Our enemies were not shy about voicing their plans for us before the war. Had we lost, the State of Israel would have joined Bar Kochva’s rebellion in the graveyard of history as another failed bid for Independence.

Had we lost, Tel Aviv would have been a mass graveyard.

Had we lost, the pogroms of 1929 would have been but a drop of blood to the buckets of the 1967 massacre.

Had we lost, a generation of young Soviet Jews wouldn’t have awakened to their Jewish heritage. My father wouldn’t have seen the iconic picture of the paratroopers by the Wall, wouldn’t have felt the call of the past and future it represented, and wouldn’t have decided to fight for the right to be free in Israel.

And I wouldn’t have been born.

And here’s the thing about victory: it’s never clean and pretty. Wars are ugly. Even defensive wars, even the most justifiable wars, are ugly.

We can’t avoid them (sorry, I’m not really suicidal enough to let’s-be-nice-at-all-costs my life away), but they’re ugly. And they’re never too kind to those who lose.

So I’m not going to apologize to the people who lost in 1967 and suffered for being on the wrong end of the ugliness of war.

I can pity them. I can empathize with them, especially those who were caught in the middle and had no control over their fate and no responsibility for the war.

Wars are ugly. Victories are not clean.

But our celebrations of victory are something else entirely.

Now that we have won, and now that we have established ourselves as the local power that we are, our victory celebrations need no longer serve as a warning to our neighbors, a better-not-try-that-again, better-know-your-place sort of hint. They serve, instead, as a reflection of who we are, of what we want to do with the life our victory purchased for us.

How do we understand our power? How do we indulge in it? What are the things we value? Is it our might itself that we celebrate, or is it the goals and ideals that should be served by our strength?

The dreams that kept us attuned to Jerusalem for millennia were not dreams of force for the sake of force.

The yearning that led us here evolved around visions of a model society; and the joy we sought here was never merely about being “great.”

As we celebrate the 50th anniversary of the 1967 victory, let those dreams and hopes and yearnings set the tenor of the day. May we celebrate in a manner that highlights the very best within us, not the worst