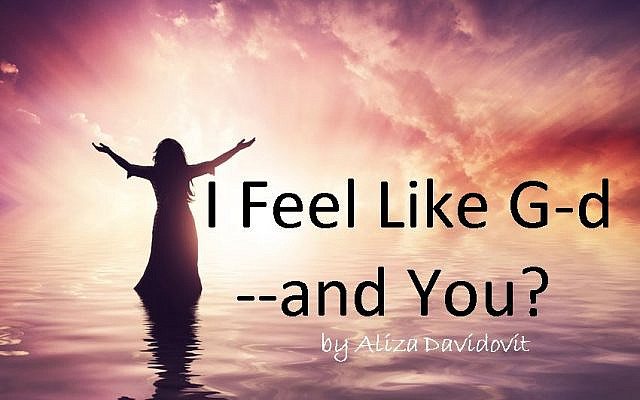 Sometimes I feel like G-d. Yes G-d. How powerful am I! No, don’t book me a room in a sanatorium just quite yet. I didn’t say I have a Napoleonic complex or think I’m Joan of Arc, just G-d. The last thing I did last night was command Amazon that I want a certain book today and with guaranteed delivery, I will get it today. This morning I commanded Alexa to play me songs by John Denver, and she took me home on a country road, although I did have to raise my voice because she didn’t obey at first. I also checked the security app on my Smartphone where I could check in on all the surveillance cameras watching my mother’s home. A car passed by in the front; an unidentified animal made prints in a fresh veil of white snow in the backyard and my mother’s health aid went down the stairs. Later I’ll be using Google map and it will take me exactly where I want to go. I’m just giddy with power. Who needs G-d, are we not G-ds?

Yes, I see my mother’s caregiver go down the stairs and I remember. Tomorrow, January 4th will be four years. I will never forget that day that made me know forevermore that we are not G-d but less than dust. All our feigned posturing and pretending, our grandstanding and grand entrances, our pride and prejudices, in a single second the One and only G-d can bring us down to our knees. “Oh dear G-d, why? Why?” But Alexa cannot answer. And Waze cannot give me direction now.

I flew to Montreal for one day with a pair of jeans and black suit to attend a family funeral. My mother looked so beautiful the evening I arrived. With her sparkling, mischievous brown eyes and blonde hair, she looked like a jewel. As always the house was aglow with her warmth, and the wafts of something delicious cooking in the kitchen greeted me at the bottom of the stairs by the garage door with my overnight bag. My mother stood on the top stair regal as always. This dynamic, vivacious, energetic, huge-hearted woman and a pillar of strength for my entire family standing there in her black jean jacket with rhinestones that sparkled when they caught the chandelier’s light.

The next day we went to the family funeral together, but my mother had a headache so we had to leave the shivah house. The headache started to get worse, and  the Tylenol didn’t help. Then she saw the bugs crawling all over her bedroom. But there were no bugs. And then her lip dropped a bit to one side. And then I called 911. In the ambulance my mother was losing consciousness quickly. I told her I loved her. She said, “Thank you.” I said that’s not good enough. She said, “I love you.” And then I heard from her no more. My mother had a major hemorrhagic stroke. The blood vessels in her brain exploded. The doctors told me she died that night. But they resuscitated her and rushed her into brain surgery. And the mother I knew, the life I had, the friends I thought were friends, the family I thought were family, all that altered in a seismic shift that night. The woman who awoke was half-paralyzed, ever dependent, couldn’t talk…I still thanked G-d for I had begged Him to send her back to me any which way, just please send her back. And He did, along with angels to carry us through. Nonetheless, it’s been four years of heartache and uncertainty with major strides forward and backwards. A life topsy-turvy. My best friend, that fiery, bedazzling woman, my yiddisheh mameh who stood sparkling at the top of the stairs, I’ve had to say goodbye to that version of her and it’s been the most painful heart-wrenching goodbye I have ever known.

No, we are not G-ds. So funny how we try so hard to be in control of our lives and circumstances and get stressed, sick and mad when the ploys of the helm don’t respond to our directives. In just a moment’s time He above reminds us that there is a hidden hand that’s in charge of the traffic flow, and the course our life will take. And the question is, “How do we handle the darkness?” Do we have a right to be angry, accusatory and resentful of either G-d or the person to our left when we find ourselves in awful, nightmarish circumstances? I know that the new version of my mother has made a new version of me, forged through fire. And though Alexa has no answers the Book of Proverbs does: “Trust in the Lord with all your heart and do not rely upon your understanding.” (3:5)   As Rabbi Shalom Arush writes, “At the point where the brain no longer understands how Hashem is doing everything for the very best, emuna [faith] begins. In other words, emuna kicks in when the brain kicks out.”

The Talmud teaches that there is no suffering without sin, either in this lifetime or a previous incarnation. So, I just pray the impurities and sins which have brought me to my knees have been purged from my soul. I know that if my uncle wouldn’t have died that day succumbing to his illness, my mother wouldn’t have lived. I would have never been at her home or in her country to save her life. All calculated by G-d’s invisible hand. Yes, as we amuse ourselves with apps and comic omnipotence, G-d is the one in control and we rarely know His purpose. Corrie ten Boom writes in her Holocaust memoir, “Every experience G-d gives us…is the perfect preparation for the future only He can see.…” Einstein says, “There are only two ways to live your life. One is as though nothing is a miracle. The other is as though everything is a miracle.” Either we believe or we don’t. It’s either all meant to be or none of it is. We can carry on kicking and screaming or with grace and faith.  If we can blindly trust a bus driver that he will take us to where we are supposed to go, how can we not trust G-d Almighty that He will take us just where we need to be? (Rabbi Arush)

In this week’s Bible reading we read about Joseph’s reuniting with his brothers. The brothers’ decision to sell Joseph into slavery was not without its repercussions. Their father was in mourning for 22 years; Joseph himself suffered from pit to dungeon, following false accusations against him. And though the Torah which avoids redundancy leaves out any description of the suffering that Joseph endured, it is understood. In all the darkness and pain, there was certainly enough blame, hatred, fear, accusations to swell in the pit of an acidic stomach that churns for revenge and justice. He had 22 years to fashion plots to repay his brothers’ misdeeds and also the power to effectuate them.  Instead of doing so, he cries before them and tells them not to feel bad about what they did to him as it was all part of G-d’s plan. It was the power of that type of faith that illuminated Joseph’s life through pitch-black years.  The Midrash tells us that Joseph was a “jumping man,” he would sing and dance all day long as an inmate (via Rabbi Arush). Instead of trying to wrap his mind around his circumstances, he wrapped his faith around them: “For My thoughts are not your thoughts, neither are your ways My ways,” says the Lord. (Isaiah 55:8)

I know all too well that I don’t have an exclusive on life’s hardships. And, in an inexplainable crescendo, I hear more stories of tragedy and suffering of late than ever before. A darkness is hovering. As a G-d fearing person I know when we suffer it is time to search our own souls, not everyone else’s. That applies to us as individuals and as a nation. Yes, tomorrow, I’m forced to remember what I can never forget: The endless hours, days and nights and months I sat in the ICU with my mother until she emerged from her coma. This was far from the halls of power where I interviewed the world’s most famous people. Month after month  listening to the nerve wracking bleeps of machines, watching people die, seeing families destroyed, processing the tears, choking them back and with a simple, “How are you?” they break like an irreparable dam. Oh, and the haunting howling of grief that ricochets into the night long after they have been released from the bellows of the heart. They resonate still. I realized there, more than any place else in the world, that we have to believe that G-d has His plan and we were never hired to be the architect. We have to learn from Joseph the Tzaddik that no matter how thick the darkness, it is part of G-d’s purpose. Like King David we must remain certain, “Though I walk in the valley of the shadow of death, I will fear no evil, for You are with me.” (23:4). Friends, I know it is so very hard to have faith when we are crying and when we are flailing and failing and mad at the world, but I also know that it is even harder to live without it. Remember it is ALL from G-d or none of it is. It’s time to decide!

Dedicated to my uncle Yechiel who died so that my mother might live. May his neshama have an aliyah! Love, your niece Aliza.