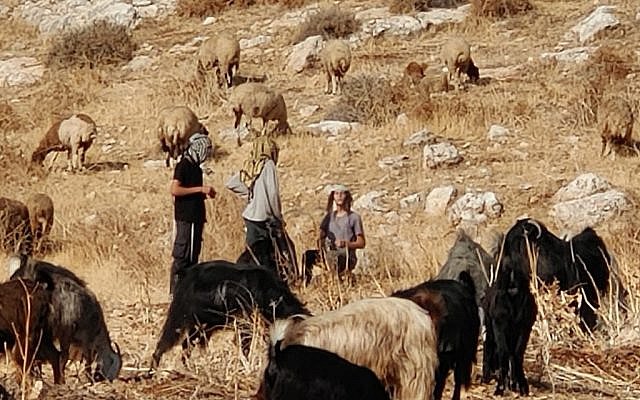 Settlers Using Their Flock Today To Carry Out Agricultural Theft

After all the physical and verbal attacks I suffered this year (see also here), I spent part of my time this Rosh HaShanah not only thinking of where I need to turn and return to God, and from whom I must ask forgiveness, but who I need to forgive. I also meditated on the fact that I can forgive what was done to me, but I have no right or ability to forgive what was done to others.

This Shabbat we read VaYelekh, and the special haftarah for Shabbat Shuva, the Shabbat between Rosh HaShanah and Yom Kippur, as we intensify our efforts to answer God’s call, turn, and return to our truest and highest selves.  In VaYelekh, Moses is making his final preparations before his death. As part of that preparation, Moses transmits “this Torah (teaching)” to the priests and Levites. Along with what we have previously taught about remission of debts and allowing the Land to rest during sabbatical years, Moses commands them that every sabbatical year they are to read this Torah before all the people during the Sukkot holiday. God predicts that after Moses’ death, the Jewish people will break the Covenant. God will abandon, punish and hide God’s Face.  In this week’s portion God only speaks of God’s Anger. However, in the dictated poem Moses will read to the people in the next portion, God also says that God will eventually vindicate us, and cease to punish. We are told in many sources, including this week’s haftarah (Hosea 14:2-10, Micah 7:18-20, Joel 2:15-27), that God will forgive us, take us back in love, and have compassion upon us.

I have often commented that for some it is more difficult to forgive than to ask forgiveness. The Talmudic tractate on Yom Kippur, Yoma, even deals with the question of how many times we must (genuinely) ask forgiveness, if somebody is not willing to forgive,

Rabbi Yosei bar Ḥanina said: Anyone who asks forgiveness of his friend should not ask more than three times, as it is stated: “Please, please forgive the transgression of your brothers and their sin, for they did evil to you. And now, please forgive” (Genesis 50:17). The verse uses the word please three times, which shows that one need not ask more than three times, after which the insulted friend must be appeased and forgive. (Yoma 87a)

Traditionally, we forgive those who have wronged us just before Kol Nidre, and every night just before going to sleep, “I hereby forgive all those who have angered me or hurt me or sinned against me, whether deliberately or by accident, whether physical or financial harm, or insulting my honor, even if harming everything I have.  Whether they were forced to do so or wished to do so, whether by accident or on purpose, whether in words or in deeds. I do this for every human being, and do not wish that any person will be punished on my account.”

I don’t see this as some sort of altruism, or “turning the other cheek,” It is not that I have a problem with altruism, and I don’t view “Christian values” as a pejorative term. However, forgiving is both firmly ensconced in the Jewish tradition, and a matter of self-interest. I don’t really know how I could survive if I was weighed down with the anger of the past. I see forgiving as cleansing my soul. There are some who I prefer not to be in contact with even though I have forgiven them in my heart, but moments such as sitting down with the young man who attacked me with a knife in 2015 was a moving experience.

And so, on Rosh HaShanah I began to review those who I need to forgive. I asked whether I have really freed myself of the psychological baggage from past wrongs, or have just told myself that I have. Faces and incidents passed before my eyes.  In each case, I tried to check in what was happening in my kishkes (Yiddish for “innards”).

However, as I thought about the different settlers who this year ripped open my ear, attacked me with massive sticks, etc., I began to think about the fact that many of them are totally unrepentant.  As much as I truly pray that they will become decent human beings, and although I sometimes see the side of some of them that craves to be cared for, particularly among the minors, they laugh when I beseech them to emulate Reish Lakish, the bandit that became an important Talmudic rabbi.  It is all well and good for me to forgive the blows, but they continue to use violence and intimidation to dispossess Palestinians.

The Gemarrah discusses how many times we must ask forgiveness and the obligation to forgive in the context of Mishnah Yoma 8:9 “Yom Kippur atones for transgressions against God, but Yom Kippur does not atone for transgressions against fellow human beings until one appeases those one has wronged.” The Talmud makes it clear that one must both do what one can to right the wrong, and also to appease the person one has wronged.

Without meaning to compare the extent of their crimes, I recall the the story that Simon Wiesenthal recounts in “The Sunflower” of a dying Nazi who asks his forgiveness.  I side with those who answered Wiesenthal’s request for responses by saying that only those the man had murdered could forgive him. The dying Nazi’s crimes were much more abominable. But, even if he had not and could not possibly make amends for what he had done, at least he was repentant. The settlers to have the ability both to make ammends and to attempt to appease those they have wronged. Incidentally, the page of Talmud cited above also includes the procedure for asking forgiveness of those who have died.

My belief that I have no right to forgive sins committed against others  is not one of vindictiveness, any more than my forgiving those who have wronged me is altruism.  I am basically OK. This is not the case for Israelis living in poverty because of those who promote unjust economic policies, or Palestinians being dispossessed both by settlers and by the Jewish State.  Neither is it the case for asylum seekers who deserve to be granted refugee status, non-Jewish Israelis relegated to second or third or fourth class status, etc.  Neither is it the case anywhere in the world where human beings harm other human beings.

Not only do we have no authority to forgive those who have wronged others and have done nothing to repair those wrongs, we ourselves sin when we don’t do everything in our power to humbly but determinedly inspire those who have harmed others to do whatever possible to fix the harm they have done.

Where we do not succeed, we must do the fixing and take appropriate steps ensure that the unrepentant cannot do more harm.  When we pray to God in the Aleinu prayer to turn to God all the evildoers of the earth, we must be God’s agents in that task.

On this Shabbat, may we forgive, repair our wrongs, and banish any complacency we may have about harm done to the earth, or to fellow human beings.