“Why do you keep going to the same old roof and taking pictures of the same Old City?” some have asked me.

And sure, maybe I seem stuck to you as I walk the same alleyways past the same coffee seller (“Salaam aleikum!”)  and the same jeweler (“Shalom Alechem!”) and the same guy with the candies to the same staircase and ascend to the same hotel with the same sign over the front desk (No alcohol. No smoking in rooms. No unmarried couples may share a room.”) to the same roof overlooking the same seam where cousins are willing to fight to the death. 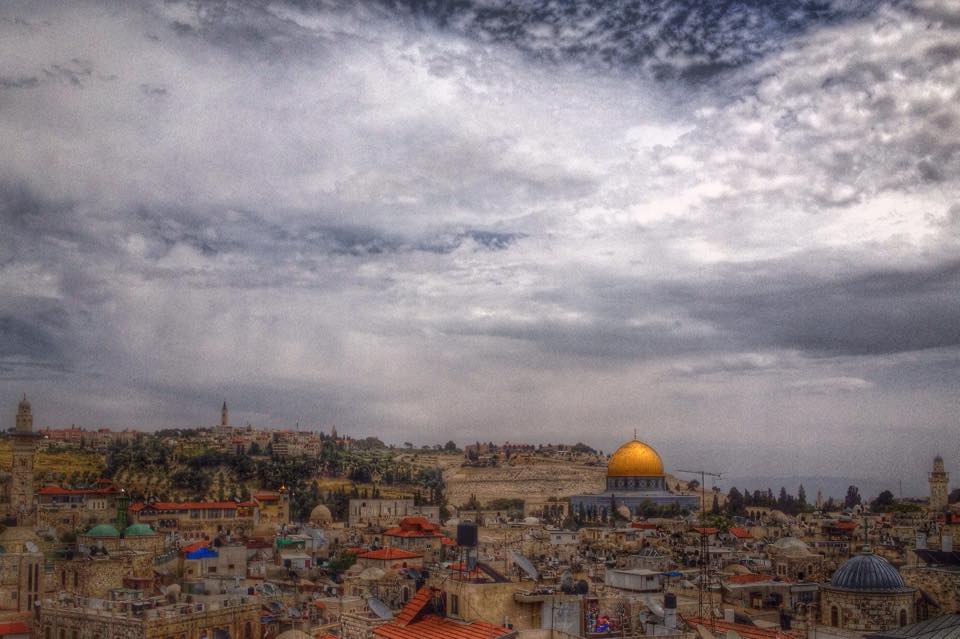 But the Old City is never the same old city. Each time it’s different, deeper, more varied and defined:

Like  passing a shop I always pass, where an old man I’ve seen so many times smiles true enough to make me stop and take a second look at  leather sandals, dark and strappy, “Just like Jesus wore!  Or Moses, maybe?” he says as he tries to glean who I am (yes, I fell feet first into the tourist trap and I tried them on.) But they fit and feel right,  right enough to barter and negotiate a price, and right enough to sit and  confide (over coffee sweet and black) that my daughters birthday is tomorrow:

“Mabrouk!” He says in Arabic, handing me a kefiyeh free of charge “ad mea-v’EHsreem” this time in Hebrew — “may she live until 120.”

Or like seeing the little shop with ancient coins in Muristan Square which I’ve never really seen until the time I went with a friend who loves relics, who loves the past, who loves things shaped by history and time, so we went inside. 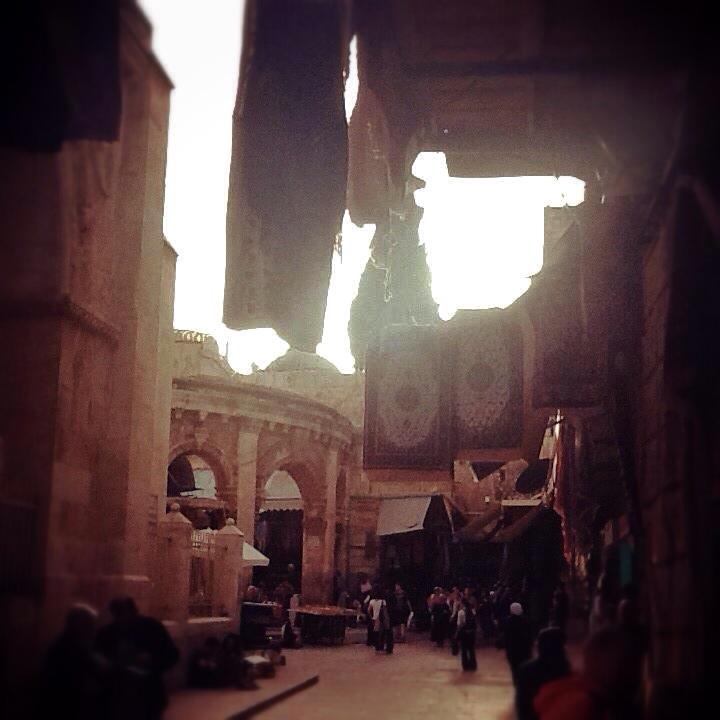 And there, over leftovers from Rome and Byzantine, and Ancient Israel, too, the leavings of ancient markets and dynasties turned to dust, I meet Saleh:

“Peace works both ways,” he says to me at sunset.

“You cannot look at the struggle for Jerusalem from one direction alone. Just like a coin — it has two sides.”

He hands me a small coin, worn and gritty, you can see that it was once bronze, but it’s now black and white. Time does that.
I held it between my right thumb and index finger. I turn it over.

Constantine on the front, and… hard to understand the back. 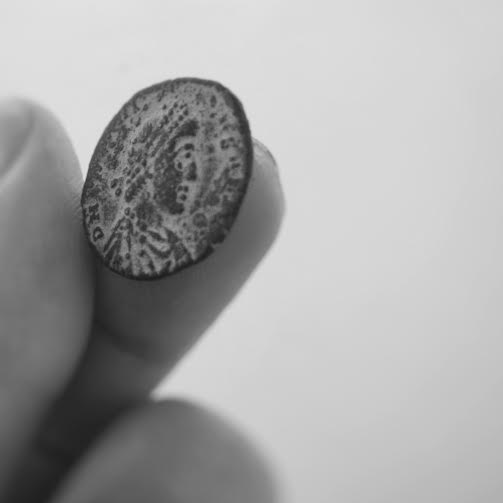 “We can’t expect only you — only the Israelis — to meet our needs. We have to find a way to understand you, too.”

And he turns to me, and signs again, a wave of breath, floating, falling, free. 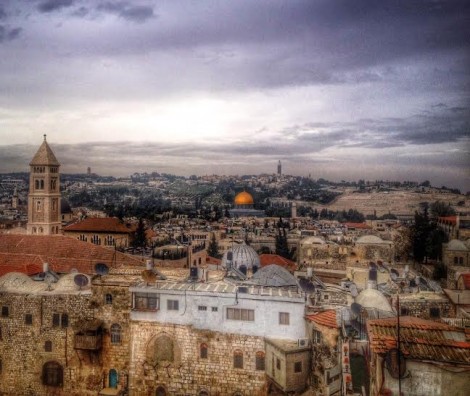 The spices in their bins rise and fall. The scarves hanging from thin wires change he their colors. The stones bear our weight patiently, but wear down in a whisper. 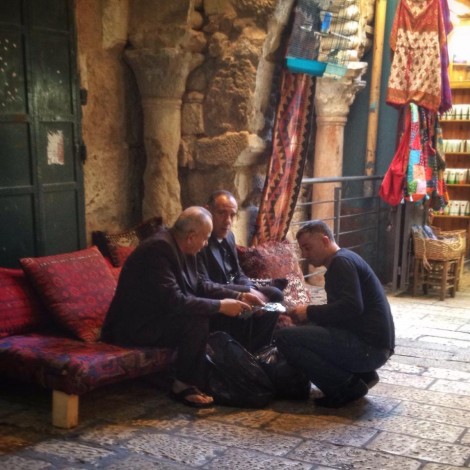 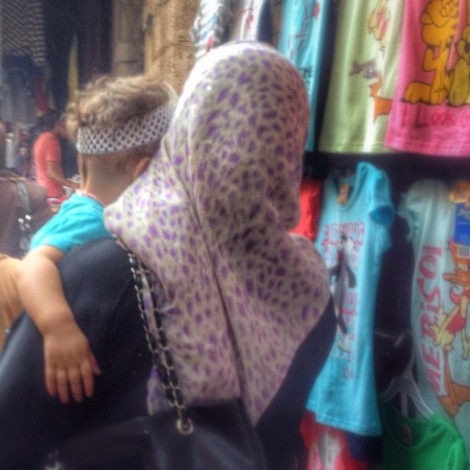 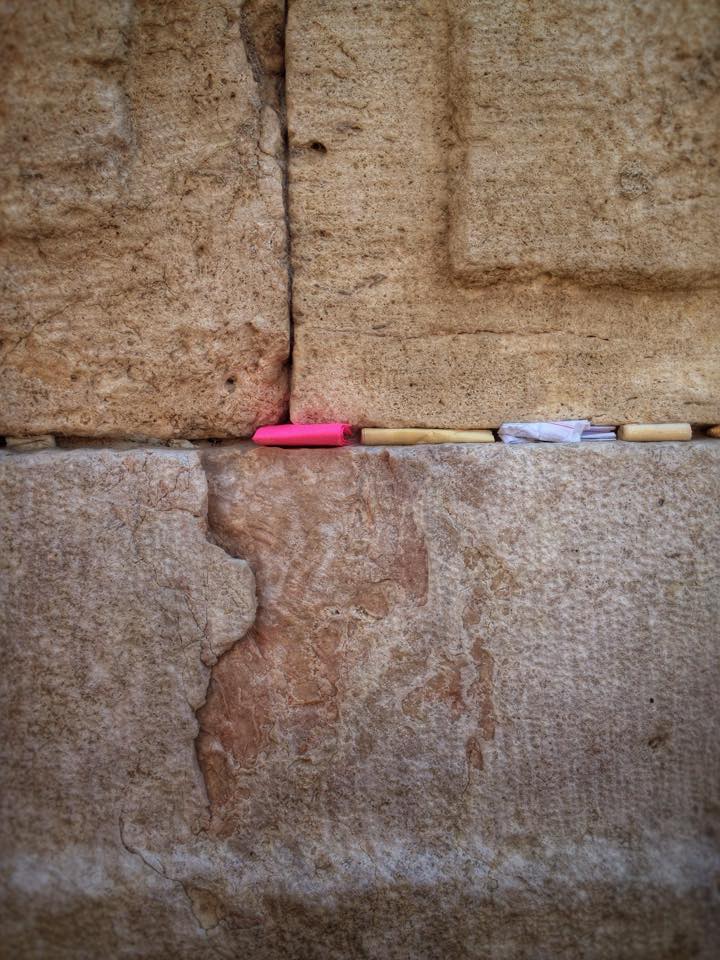 So, can you see it? The same Old City is never the same.

Like the man by the Western Wall with the red string he sells — normally, I walk by in a blur when he asks for Tsedakkah — a donation — in exchange for a  blessing and a reminder in red worn around the wrist.  Except one time when I look up long enough to look into his eyes, and say “I just don’t have the money to give you.”

“May you be healthy!” he says — “take it, take it.  I can you see need it.”  And he murmurs a prayer for me, for my health, for happy children, for love, and for — with Gods assistance, always — enough money some day to never worry about such things.

Or like the surly man behind the counter of the hotel with the rooftop balcony, where I’m standing now, on the ledge, overlooking:  I used to pay him 10 shekels to see the roof, my favorite roof, with a view of my favorite place … (It’s worth it, trust me. ) But now each time I come he smiles and says “you’re here so often, we’ve come to trust you. Give what you can in the donation box.”

And from this roof — my favorite one — you can see it clearly, too: Just as the sky changes, so can stone, and so can we. 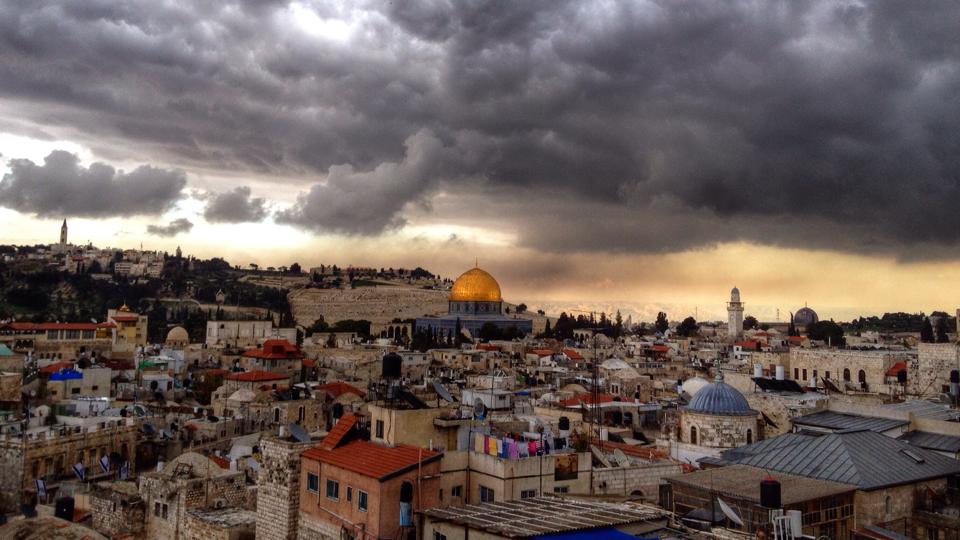