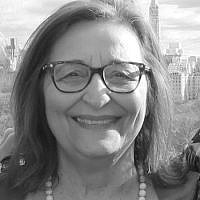 The Blogs
Giulia Boukhobza
Apply for a Blog
Advertisement
Please note that the posts on The Blogs are contributed by third parties. The opinions, facts and any media content in them are presented solely by the authors, and neither The Times of Israel nor its partners assume any responsibility for them. Please contact us in case of abuse. In case of abuse,
Report this post.

Since the American “exit” from Afghanistan, I feel, by osmosis, that I can relate to every Afghan woman and girl who is stuck now in what can be only described as a hellish nightmare. I understand them, and I cry for them. Because until the age of 16, I lived their life. Well, more or less, but enough to grasp their deepest emotions and fear.

I was born in Tripoli, the capital of Libya, in 1951. I am the second oldest of six sisters and two brothers. Even though Libya was in some ways more cosmopolitan than Afghanistan — we had movie theaters and concerts, an American airbase, and Italian schools where I had my education — Muslim women still had to wear a burqa in the streets, covering the entire body except for a mesh screen to see out of, and did not work outside the house.

We, as non-Muslim (Jewish) females, were allowed to wear Western clothes. Yet, I knew from a very young age that I belonged to the worst group of all: Being both a female and an “infidel.” You can argue which was worse. In my view, it was being a female.

Wearing Western dress made me a perpetual target. Or, to paraphrase the countless men and boys who tried to pinch me, touch my breasts, and expose themselves to me (and my sisters and female friends), I was a “whore,” a “sinner,” a “prostitute,” and a “dog.”

They would attempt to “bump” into me while walking, or, if I was in the water, come from underneath to try to remove my bathing suit. I could feel their repressed lust coupled with unbridled hatred. My fear was indescribable. I became so traumatized that, to this day, decades later, I am still reluctant to enter the water and can barely swim.

Surely, their hatred was a function of religious indoctrination, coupled with the frustration of desiring women but being taught that their own women had to be essentially hidden from sight and “pure”.

Yet strangely, because I did not know any better, because I had never seen the world outside Libya, I somehow adjusted to this life. I instinctively understood the tactics for survival – try to stay quiet, keep my head down, cross the street if a male approaches. And, yes, confide in my girlfriends in a similar position for the sake of my own mental health, but never with my parents or brothers in order to protect them from their own sense of helpless rage.

After all, we were a tiny minority within a larger minority of non-Muslims in an overwhelmingly Muslim-majority society. And we felt it. We girls more than others.

I remember vividly an episode that encapsulates so much for me.

A new girl from Greece arrived in our school. She and I become fast friends. Earlier, she had lived in Italy, and I thought she was sophisticated, elegant, and beautiful.  One afternoon, she and I were walking in the center of Tripoli and some men started groping us. She immediately began screaming at them. I saw danger. I took her hand and started running with her, entering the first store I saw.

Breathless, I told her she cannot yell like that. We could have ended up being punched, killed, or imprisoned on some trumped-up charge. I’ll never forget her reaction. She looked at me as if I were crazy and said: “No, they can’t do that to me. I have my Greek embassy here to protect me.”

I came home and broke my own rule by telling that story to my mother. Her reaction was that from now on I could only meet my new friend at my place or hers, but not outside because if something happened, I did not have any “embassy” to help me.

And then in 1967, after a hatefest that saw some Jewish families slaughtered and my family almost burned alive by a mob, we were allowed to leave Libya with one bag each and the equivalent of thirty dollars per person. I was never to return.

Italy offered us refuge. The ten of us arrived on July 14th, crammed into one room in a hostel, and four days later two sisters and I started working to help our family survive. At the time, we were 17, 16 and 15 years old.

Life was not easy and we were as poor as church mice, but I still remember that period in Rome as one of the happiest times of my life. It took me a while to understand exactly why. And then one day it came to me. It was the discovery of freedom. Freedom to be me. Freedom to be a female. Freedom to walk and not be scared of being harassed. Freedom to appreciate that when young Italian boys would flirt with me, they knew they had no right to touch me or call me a “whore” just because I didn’t wear a burqa.

Now at the age of 70, I cannot even begin to fathom living without that freedom, or, even worse, that my granddaughters would have it denied to them.

And this brings me back to Afghanistan.

Those women and girls for the last 20 years had the freedom to study and work. And now, like a bad dream, they are all again forced to become invisible and hide in the shadows. The older ones know what their future is likely to be because they saw this movie before when the Taliban ruled Afghanistan from 1996 to 2001.

What would I do if this happened to me? How could I give up my freedom once I tasted it? Were Afghan women better off never having experienced freedom rather than losing it after beginning to savor it? Will they summon the indescribable courage needed to fight back?

And that brings me again to my anger.

Where is the Hollywood crowd? Usually, they all love to make grand, virtue-signaling gestures. Did any of them launch a hunger strike, organize a protest, or offer one of their private jets to try to rescue some women and children? It may or may not have made an actual difference, but at least it would have shown some much-needed compassion and empathy.

Where are Rashida Tlaib, Linda Sarsour, and Ilhan Omar, who profess such concern for human rights in the region? Will they speak up for fellow Muslim women and “sisters” who face Taliban suppression? Why aren’t they screaming from the rooftops? Do they care? It seems not.

This is why I can’t sleep – and don’t want others to sleep, either.

I can see in the Afghan girls myself as a girl, when my mother told me that, unlike my Greek friend, I had “no embassy” that would come and rescue me.

Shame on our silence.

Shame on our hypocrisy.

Shame on our willingness to consign 20 million women to suppression and suffocation.

Shame on our blatant ignorance about the truth and misplaced, condescending theories about cultural relativism.

Shame on all those naive Western women who said that defending the veil was defending “freedom of choice” and also never understanding the philosophy behind the veil: that the only people enjoying freedom were the men who imposed the idea of the veil.

Shame on all the talking heads who’ve never had the humility to admit they couldn’t understand the real meaning of dogmatic religion taken to the nth degree and its dire consequences.

History will not be kind when this chapter is written. Nor should it.

About the Author
Giulia Boukhobza, a refugee from Libya as a teenager, lives in the United States.
Comments