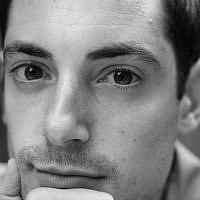 The Blogs
Gilad Skolnick
Apply for a Blog
Please note that the posts on The Blogs are contributed by third parties. The opinions, facts and any media content in them are presented solely by the authors, and neither The Times of Israel nor its partners assume any responsibility for them. Please contact us in case of abuse. In case of abuse,
Report this post.

It is time that we heed the United Nations and J-Street’s (a lobbying group based in Washington D.C.) call against Israel’s control of the Golan Heights and return this land to the historic homeland of the Syrian people, whatever that might be.

It is almost exactly 48 years since the state of Israel came into control of the Golan Heights, longer than any entity over the past 500 years other than the Ottoman Empire. But as the old mantra goes, don’t put off tomorrow what you can do today. Israel must give this land to whomever J-Street and the United Nations feels deserves it, so that President Assad or ISIS can extend their creative ruling style to this land.

J-Street makes no effort to differentiate the Golan from other areas it considers “Israeli settlement,” and talks against Israel’s control of this land. Meanwhile the UN has called for Israel to cease various activity in the Golan many times over the past few years alone. Perhaps they have a point?

Syrian claims on this volcanic plateau, which they controlled for barely two decades, originate from a map drawn about 90 years ago in Paris. On that day representatives of the British and French started a three year process of hashing out what came to be known as the Sykes-Picot Agreement.

It was decided that the Golan would be controlled by the French. Large parcels of land were swapped between the empires during this time, without any time wasted consulting the people living in the area. For example, one region that the UN and J-Street recognizes to be within “Israeli borders,” Tel Hai, where the early Zionist leader Joseph Trumpeldor uttered his infamous line “it is good to die for our country,” was at first put under French control. Only later after some wheeling and dealing, was it switched over to the English, and thus later ended up as part of Israel once the country became independent in 1948.

Within the lengthy text in the treaty delineating the border between British and French control in the Middle East, only a few lines actually refer to the Golan. These sentences were primarily concerned with which European power would control vital rail lines. These obscure sentences are the basis for Syrian claims to the Golan Heights.

Above, a couple sitting in a ski lift in the Golan, hoping for an expansion of snowboarding once ISIS controls this land. (credit: Gilad Skolnick).

The French and British knew what was best for the Middle East about a century ago, and their thoughts on the matter right after the first World War should be respected for eternity. Who are we to question their utter brilliance? These great minds also created the borders of many of the nations of Africa, the Middle East, and much of Europe. The results of course this has led to nothing but peace and prosperity since then, aside from a few minor border skirmishes here and there over the past century.

When Syria emerged as an independent nation in 1946, it inherited its French created borders, but unfortunately little French inspired cuisine. A hummus escargot crepe to this day is a challenge to find in downtown Damascus. We are all very lucky that the French were so thoughtful in their creation of a utopia nation comprising of Kurds, Alawites, Sunni Arabs, Jews and Christian communities all together in one new lovely country.

Meanwhile, for the next 21 years, Jewish farmers in northern Israel provoked the Syrians as they farmed delicious food under the watchful, hungry gaze of Syrian troops stationed in the Golan. The Syrians naturally defended their honor as any nation would with shelling, rocket fire, and sniper fire from the Golan aimed at Israeli civilians.

Valuable agricultural land in the Golan Heights is now sitting unused, filled with archeology just gathering dust. Like much of modern day Israel, the Golan Heights is strongly linked to ancient Jewish history as well. Many of the battles of the Maccabees occurred here. The site of Gamla in the Golan Heights shares a similar story with that of Masada. Jewish life continued here for centuries after the fall of Jerusalem, and during Talmudic times it was a center of Jewish thought. On the Syrian side of the border, ISIS and Assad’s regime have done a stellar job through bombings to clear pesky archaeology and archeologists. Imagine the great that Syria could do in the Golan Heights, freeing countless previously fallow acres for tilling.

Figures on Israel’s political left now oppose Israel ceding the Golan Heights in exchange for peace. Ari Shavit of Haaretz admitted in his August 2012 article “Soul-searching on Syria” that he been wrong for calling the Golan Heights to be given to Syria in exchange for the promise of peace, writing “I couldn’t help but think what would be happening today if the ideological position I supported – peace for the Golan – had gained acceptance. . . I had to admit, that if the worldview I believed in had been implemented, brigades of the World Jihad would be stationed next to Ein Gav, and Al-Qaeda camps would be on the shore of the Kinneret.” Should we really trust such flip-floppers?

Sure, Israel withdrew in the 1980’s from the Sinai and now large parts of it are controlled by Jihadi-inclined groups, and yes, after Israel withdrew from Gaza in 2005, Hamas took control of the area and attacked Israel with over 10,000 rockets, but as the great Middle Eastern philosopher Abu Suleiman al-Naser may have been rumored to have thought once, third time is the charm.

Today about 40,000 people live in the Golan Heights, more or less equally divided among Jews and Druze. Ilan Ben Zion wrote in the Times of Israel about how Druze are applying for Israeli citizenship, quoting one resident who stated: “I believe this trend will only increase. . . more and more people comprehend that this [Israel] is a well-managed country…”

I side with J-Street and the UN though, let us not put this issue of sovereignty to a vote by the residents who live there. What right should they have on who controls their land? Many of them have never been to Paris where the original Golan Heights borders were drawn and have no idea what the post World War One atmosphere was like. Who are they to judge how the border should look like? Some of them don’t even have PhD’s or even a Masters degree in cartography.

A drive through the Israeli controlled Golan Heights today is frustrating, as drivers must contend with nature preserves infested with vermin such as mountain gazelles, an ancient castle, a college full of rowdy students, Israel’s traffic inducing one and only ski area, charming Druze and Jewish villages, including an artist’s village, wineries, cafes and restaurants. The area today also lacks a certain breathtaking rustic vibe that is found in areas such as in the culturally rich Syrian city of Raqqa. People who travel to these areas in Syria and make it out often describe their experience as unforgettable, this could be the Golan Heights!

Recent improvements to life in Syria could be spread to the Golan Heights, once Syria is in control. Environmentalists will champion the even lower carbon footprint as driving and factory output are at an all time low in Syria, and the health conscientious will be thankful of the decrease in sun related skin damage for women thanks to ISIS’s thoughtful dress code. Some minority populations might be up to their usual complaining due to massacres and enslavement now common in Syria, and Jewish immigration to Syria is at an all time low after over half a century of pogroms and anti-Semitic violence, but such trivial details should not get in the way of this land transfer.

It is clear that whether Israel should give up the Golan Heights for peace with Syria should not be up for the population of the Golan Heights, the citizens of Israel nor for their elected representatives to decide. Rather this land should be handed to Syria as the UN and J-Street have called for. The time is ripe to heed to the collective brilliance of these organizations.

About a week ago, Israel’s Education Minister Naftali Bennett spoke at the annual Herzliya Conference, calling on the international community to recognize Israel’s sovereignty over the Golan Heights. It is exactly because of such extremist rhetoric that pressure for Israel to relinquish this land to Syria should be stepped up now. The 1923 Treaty of Lausanne was at a high point of human achievement. We must honor it.

Note: The above piece is a satire.

About the Author
Gilad Skolnick is the Director of Campus Programming at CAMERA. He holds an M.A. from the University of Delaware in Urban Affairs and Public Policy and B.A. degrees from the University of Massachusetts-Amherst in History, Communication, and Judaic Studies. His junior year was spent studying at the Hebrew University in Jerusalem. Gilad was active in the Student Alliance for Israel, serving for several years in elected positions and was a columnist for the UMass Daily Collegian. Prior to joining CAMERA, he served in the IDF as a Corporal in the Spokesperson's Unit. Gilad's articles have appeared in the Jerusalem Post, Israel21c.org and Times of Israel. He continues to lead workshops and sessions at various campuses across the country on B.D.S., the importance of accurate reporting in the media, and letter to the editor writing.
Related Topics
Related Posts
Comments