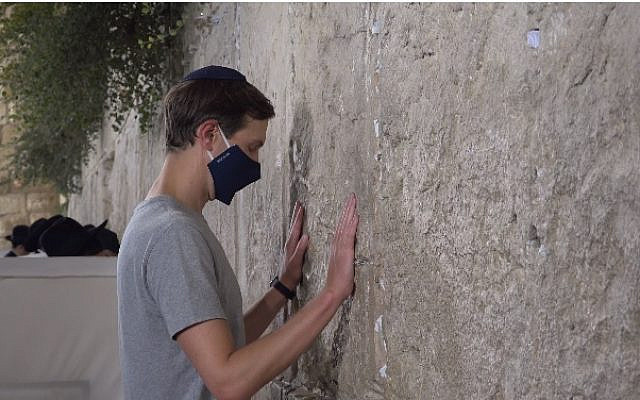 I have to admit it; I completely underestimated Jared Kushner. When President-elect Trump announced that his son in-law was to be a senior advisor in the White House I rolled my eyes. Other than marrying the President’s favorite daughter, what qualified Kushner to advise a President? When it was announced he would lead the peace making efforts between the Israelis and Palestinians I was angry. Kushner had no experience and there was nothing in his past that involved international diplomacy. I placed little hope in the Trump administration succeeding in the Middle East. I thought at best nothing would happen over the next four years and at worst, things would be made much more challenging in Israel.

Yet, over the past three and a half years Kushner has far surpassed expectations. Kushner led the effort to pass bipartisan criminal justice reform, improving the lives of thousands of Americans. He is credited with shaping the new United States-Mexico-Canada trade deal that will create more American jobs. Most importantly, he has steered the Trump “Plan to Prosperity,” put Iran on the ropes, and forged normalized ties between Israel and the UAE. These aren’t flukes, they are significant achievements that deserve recognition.

Kushner’s success stems from the Trump administration’s insistence on finding the best way to breakthrough stalemates and not simply follow past administrations’ playbooks. Many criticize innovative approaches in governing and foreign affairs; they insist the same paths be taken again and again. They criticize President Trump and his advisors for taking a new direction. What they fail to recognize is that in many areas, shaking things up breaks logjams that have paralyzed achievement for generations. In taking a different path, President Trump and Kushner have shown flexibility that has led to new developments.

The second novel approach that Mr. Kushner took to foreign policy was recognizing the leading role economics can play in diplomacy. Former diplomats had always placed ideology as the motivating factor behind any diplomatic efforts. Mr. Kushner realized that improving the economic situation of Sunni Arabs could motivate greater diplomacy between Israel, America and the Sunni Arab countries.

The most important innovation that President Trump and Mr. Kushner brought to the U.S.-Israel relationship and to the Israeli-Palestinian conflict was the insistence on dealing in reality on the ground and not how “peacemakers” fantasized about a reality they could shape. In recognizing that 30% of Judea and Samaria was already, and forever would be, under Israeli control, Mr. Kushner was able to gain the confidence of Israel leadership.

President Trump and Mr. Kushner have reset relations in the Middle East, and possibly all foreign affairs. If President Trump wins reelection, it can be expected that he will continue along this same path, but in an even more deliberate and confident manner. More deals will be struck and more relationships will be created. If Vice President Biden wins reelection, a return to the old paradigm of peacemaking will seem archaic and ineffective. It will be rejected or ignored by the world, especially in the Middle East. A Biden administration will have to conform to the innovations that President Trump has brought to the world.

I was wrong about Mr. Kushner and his abilities. Over the last three and a half years, as Israeli Prime Minister Netanyahu said, Mr. Kushner has been mocked and called a failure. Any honest examination of Kushner’s record will conclude that he has been successful. I am convinced that history will record Mr. Kushner as one of America’s most successful Presidential advisors and diplomats.