When I was a young boy living in Rhodesia and South Africa, I used to celebrate this day. My chest would burst with pride as I basked in the glory of Israel’s victory as if by virtue of me being Jewish I could attribute some of the shine of Israel’s triumph to myself. It was arguably the most stunning victory in modern military history. And stunning it was; outnumbered by overwhelming forces on all three borders, Israel, in a display of strategic brilliance, launched a preemptive strike, that was a masterclass of military precision, to defeat three armies within the space of six days.

For me, Yom Yerushalayim does not only celebrate the reunification of Jerusalem, it is a celebration of our victory in the Six Day War. Israel owes its self-confidence and its sense of security today, to us winning that war. Overnight, we had space. Our borders were secure and we could live our lives with a sense of permanence. No more living for today, now we could plan for tomorrow. What can I say? We reveled in this victory; this was the embodiment of the “new Jew”, the burly Sabra, who stood up for himself and fought for his dignity. No more the hunched, bearded Jew, cowering before his tormentors. This Jew was a force to be reckoned with! It ignited the imagination. It filled us with pride.

But, for as much as the Six Day War was a gift, it was a curse; a poisoned chalice. Our pride has turned into hubris, which in turn has infused us with a sense of superiority.
The territory we gained has given us strategic depth and space to breathe, but what we have done with the territory we gained, has twisted our sense of justice and corrupted our values.
It has made us insensitive to the suffering of those over whom we reluctantly rule but refuse to release from our control.

We, who know all too well what it feels like to be oppressed, have become the oppressor.

We, whose parents and grandparents were dispossessed of property and wealth, now dispossess others of their land, with government sanction.

On Yom Hashoah we look at the picture of a terrified little boy with a yellow star on his coat, as he faces the guns of fully armed soldiers with his arms raised. There is such fear in his eyes that you cannot help the tears that blur your vision, and the involuntary sob that constricts your throat. Now it is our soldiers – our sons! – who arrest 8-year-old boys, while dressed in full combat gear. The boys’ fate may be different, but the picture is the same.

This too is the legacy of the Six Day War. And yet, however much I am appalled at how our collective sense of humanity and moral justice has been corrupted by the results of the outcome, I do not regret for one minute that we won, or that we “ostensibly” started the war by striking first. If we had not, we might not be here today.

I only wish that we had been prescient enough to have done something better with the results of that victory. 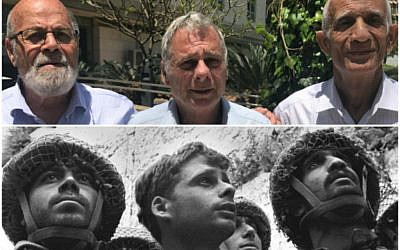 Paratroopers at the Western Wall, 1967 and in 2017 on the 50th anniversary. (Courtesy Times of Israel, Andrew Tobin/David Rubinger/ GPO).

“Har HaBayit beyadeinu” – (We have taken the Temple Mount).
Those three words of Gen. Motta Gur over the radio, as he barely managed to control his emotions, encapsulate the sense of liberation every Jew felt upon learning that our most holy place was in our control. That our once divided Capital – with a wall that divided East from West like an ugly scar in our spiritual heart – was once again whole. It was a historic moment.

But, let us be honest; Jerusalem is unified, but it is still divided. There is a systemic inequality that divides between the Jewish residents of Jerusalem and the Palestinian residents. There is virtually no integration in Jerusalem’s neighborhoods, and while Jewish neighborhoods in East Jerusalem continue to grow and prosper, Palestinian neighborhoods are starved of building permits. Municipal investments and services in Silwan, Shuafat, and Beit Hanina lag far behind those of Ramot, Gilo, and Pisgat Ze’ev, and the socio-economic inequality is stark.

About the only place where the two sides meet and mingle is in the Old City, and this last week, we have been witnessing just how volatile that can be. Thus, to say Jerusalem is “undivided” is imprecise, to say the least.

This is what has happened with Yom Yerushalayim. It used to be a national holiday celebrating the unification of the city. There used to be tours following in the footsteps of the Paratroopers searching for the Kotel, ending in festive flag-waving and rikudei am (traditional Israeli dancing) at the Kotel.

However, Yom Yerushalayim has become a day on which Israeli Ultra-nationalists assert their Jewish Supremacy, by provocatively marching through the Muslim Quarter of the Old City and the Palestinian suburbs, while they vandalize property and intimidate the residents. I remember when I lived in South Africa, Afrikaners used to say, “the natives need to know their place”. This display of open supremacism by the likes of Gopstein, Ben Gvir, and their unholy disciples is exactly the same, and it is disgusting. What should be a celebration for the reunification of the Capital has become a racist March of Hate to impress upon the Palestinians their impotence in the face of Israeli control. 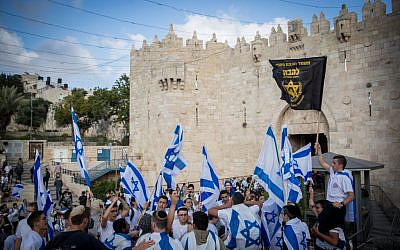 Yom Yerushalayim outside Damascus Gate, about to enter the Muslim Quarter. Note the prominence of the Lehava Jewish Supremacist flag. March of Hate? (Courtesy Times of Israel, 5/14/2018).

These extremists have forgotten the spirit of Jerusalem. They have ravaged what Jerusalem, the city that holds the promise of peace woven in its name, stands for. How can we ever attain peace, while we continue to provoke such conflict and pain?

And that is why I can no longer celebrate Yom Yerushalayim.