In honor of Purim, a holiday that combines dressing up in costumes, getting very drunk, and retelling a lot of historical stuff about one king, two queens, and slaughtering the enemy to the last man, woman, and child — here is something a little different (excerpted from Part II of No More Enemies, the book):

If I were Herzl now, I hope I’d be smarter than Herzl was, back in the day.

There’s an old story from the Jewish diaspora in Eastern Europe, maybe a hundred and fifty years ago. Two old Jews, Moishe and Yankel, are drinking a companionable glass of tea (“a glez tea”), and thinking about life and its impenetrable mysteries. Suddenly Yankel says to Moishe, “You know what? If I were the Baron de Rothschild, merchant banker, I’d be even richer than Rothschild.” Moishe eyes him doubtfully. “What do you mean, richer? How?” “It’s easy,” says Yankel, feeling rather clever. “I’d do a little teaching on the side.” (I read it in Nathan Ausubel’s A Treasury of Jewish Folklore, 1963.)

From the vantage point of the terrible human relations quagmire that is Israel/Palestine in the early 21st century, I can look back at Theodor Herzl (1860-1905), legendary father of Zionism, and know for a certainty that, visionary though he undoubtedly was, there were some serious holes in his thinking.

Herzl’s Zionism was a movement born in relative if not absolute innocence as the national liberation movement of the Jewish people of Eastern Europe and wherever else they might need to be liberated from; a movement designed to give the archetypal “wandering Jew” a home of his own and end his millennia of often bitter exile as a frequently unwelcome guest in other people’s countries. It all began in the late 1800s; long before Hitler.

Influenced by the revolutionary nationalist fervor percolating all around him in the Europe of his day, Herzl envisioned a Jewish state in Palestine and was able to promote his vision so successfully that it eventually came into being–helped along by waves of dedicated volunteers, serious philanthropy, political maneuvering, and world events, including but not limited to the sincere desire of many Europeans to make amends for past anti-Semitism and, more specifically, for complicity in the Nazis’ Final Solution for the “Jewish problem.”

But I’d bet my last dime that Herzl never foresaw an Israel that would construct “Jews only” roads on the West Bank, steal land and water from Palestinian Arab farm families to build upscale new Jewish towns with green lawns and swimming pools, become infected with rampant xenophobia, and permit religious extremists to gradually take over the country’s army. I’m sure Herzl never foresaw the transformation of large Palestinian Arab population centers into open-air prisons where upwards of 3.5 million ordinary men, women and children are warehoused indefinitely in a precarious parody of normal life, while too many of the jailers–ordinary Israeli Jews–carry on experiencing themselves as eternal victims.

If I’d been Herzl, I’d have been smarter than Herzl…. I’d have made sure to do a lot more culturally sensitive, historically timely, creative social engineering on the side.

But anyhow I wasn’t and he didn’t, and that was then and this is now. Our century is going to be the century of interdependence and co-evolution. Today’s young people, linked globally by the cyber networks, know something that Herzl arguably could not have foreseen in 1900: the “Jewish problem” and the “Palestinian situation” are one. United we stand; divided we fall. No more enemies. We have a lot of work to do. For the sake of all our children. 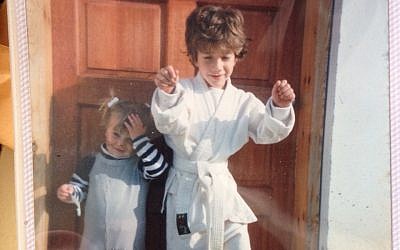