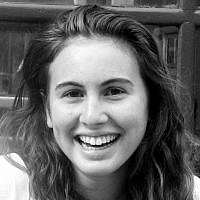 The Blogs
Michaela Elias
Apply for a Blog
Advertisement
Please note that the posts on The Blogs are contributed by third parties. The opinions, facts and any media content in them are presented solely by the authors, and neither The Times of Israel nor its partners assume any responsibility for them. Please contact us in case of abuse. In case of abuse,
Report this post.

Two walls stand about eight kilometers apart. A distance easily morning joggable, a hundred or so New York City blocks. A thoughtless distance. But the distance does not define this space. The space is defined by something much less quantifiable and so much more incomprehensible than numbers and measurements. And the things that fill the tiny space are not at all tiny. They are monstrous. They thrash and tremble and roar. The walls are solid and thick, but the things that fill the space seep through the invisible cracks, unnoticed until they crash, somewhere close or maybe somewhere very distant.

The walls tell of different times. Different in terms of chronology, but maybe otherwise the same. When we say we’ve become “more advanced” we talk of the weapons we use for wars, not our reasons for waging them.

Both walls stand in defiance of the people who at some time did not want them to exist. One wall was built out of hope, to draw people together, the other out of fear, to keep people away. Both are domineering and ugly and strikingly beautiful. And thousands of people gaze at each wall every day. One wall is caressed and drenched with tears while prayers and longings are unloaded upon it, sometimes in the form of words and sometimes in the form of supplications scribbled on crumpled pieces of paper, shrewdly inserted into crevices clearly not meant for that purpose. The other wall is viewed through woeful eyes that might never forgive. It is mostly viewed from a distance, as if coming too close to this slab of concrete will render one vulnerable to whatever lies on the other side. People place their prayers on this wall, too, but not with indiscernible notes; Rather they leave their messages in the form of murals, exclamations and declarations. Unlike the messages at the other wall, these messages are intended to be seen.

If the walls could talk they would tell of heartache. Of rivers of tears. Of loss. They might speak of anger and hatred and unanswerable questions. But in between the cries of pain and the shouts of sorrow, there can be heard whispers. Whispers of hope. Whispers of some more promising future, somewhere just beyond one’s scope of vision, a distance not yet joggable or navigable. If only they could meet, these two walls. They would certainly have what to talk about. But the walls can’t talk, they just listen and absorb everything into their impermeable slabs. That’s why they are told so much. And they certainly can’t move, these two walls about eight kilometers apart. And so they continue to stand, resilient and still, while people raise swords or guns or words, or whatever the choice of weapon is at the time, debating their existences and their futures. And they continue to listen to all the things that people should maybe say to each other, instead of just to a wall. And maybe in those rare moments, when no one is looking, the walls begin to weep. Because they are exhausted. Because how much agony can one wall bear. They are just walls.

About the Author
Michaela Elias just completed her year at Ein Hanatziv in Israel; She is interested in Jewish philosophy, Israel advocacy and the peace process. She plans on continuing her studies at Stanford University in September.
Comments