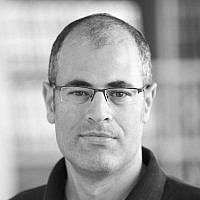 The Blogs
Shmuel Shattach
Apply for a Blog
Advertisement
Please note that the posts on The Blogs are contributed by third parties. The opinions, facts and any media content in them are presented solely by the authors, and neither The Times of Israel nor its partners assume any responsibility for them. Please contact us in case of abuse. In case of abuse,
Report this post.

“A group of parents started Talmud Torah x. They saw an opportunity to increase the quality of Torah education in the region. The Talmud Torah does not yet receive any governmental support, and your donation will help to continue developing this important institution.”

The quote above is the headline of a fundraising campaign aimed at a new Talmud Torah that was established a couple of years ago in one of the cities of Israel. A Jewish benefactor in the Diaspora reading this statement might feel urged to assist and donate. He gets the impression that the Israeli government does not assist the study of Torah, so he will regard it as his duty to do so.

However, the true picture is diametrically contrary to this impression. The State of Israel does not support this institution because it has no justification, and its establishment causes damage to existing institutions, to vulnerable sections of the population and to children with special needs. When a donor helps finance this institution, he circumvents the Israeli regulations and causes damage to its education system without knowing.

To make this statement understandable, it is necessary to describe briefly the structure of the Israeli educational system, which is very different from the American one. When a new neighborhood is about to be established, it is also decided from the outset what type of schools will be serving its population and funds are dedicated accordingly for their building and activity. The State of Israel builds the schools, provides the teachers’ salaries and covers all the ordinary expenses of the schools.

Existing schools do raise funds from the public. However, these funds are aimed at extending and enriching the school’s activities, i.e. providing extra tuition to overcome learning difficulties, building a library or a special beit midrash, activities necessitating funds over and above the budget provided by the state.

If a school asks you for assistance with its basic activities, there must be a reason for the lack of funding from the state. In such a case – do not donate.

So, for what kind of schools does the state not provide budgets?

Here we are dealing with locations that already have a variety of active schools, but a small number of parents wish to have a separate school for their children. When such a request is made, the ministry first checks if the number of children involved justifies an additional institution. If the number of parents is large, the request will undoubtedly be approved. However, if we are dealing with ten parents, as was the case with the institution mentioned above, there is no justification for opening another institution.

The request to open a small institution is often motivated by an attempt to create social segregation. Such, if the local school admits children with an Ethiopian background, we will not be surprised if a group of parents turns up with a request to open an additional school. They will, of course, admit a couple of children with Ethiopian background and possibly flash their picture on the front page of their campaign brochure as a fig leaf to cover the discrimination implied.

These small institutions damage their environment, causing the existing schools to lose students and thereby causing them inability to function effectively. This again leads to increased demand for payments from parents, an inability to answer the needs of weaker students and even to introduce a selection of students in order to survive the “competition”. In the religious sector, the small institutions are often Talmudei Torah. Their appearance leaves the general religious population with diluted educational institutions, causing traditional but not strictly religious parents to forego religious education altogether. Therefore, the donor who thought he was contributing to the strengthening of Torah is, in reality, causing a weakening of existing religious institutions and families rejecting those institutions and religious education altogether.

If you are asked for a donation towards establishing a new school, please make a thorough check on its background

About the Author
Executive Director of Ne’emanei Torah Va’Avodah. Mr. Shattach, a social activist, was selected as one of the 50 most influential people in Israel twice, and won numerous prizes that acknowledge his public work for promoting pluralistic religious education in Israel. Mr. Shattach is an expert in the field of public management and education. He worked as Rabbi-Teacher and as Vice Principal, in Amit Technological High School, near Bar-Ilan University. He previously served as an envoy (Shaliach) for the Chicago Jewish community and as a parliamentary aid in the Knesset. He lives in Lod with his wife and six children.
Related Topics
Related Posts