The portrait of The Hirschsprung Family, by the Danish painter Peder Severin Krøyer, was posted on Facebook,by Scott E. Bartner, with this amusing caption:

“How people ignored each other before smartphones”

Indeed the seven members of the  Danish/German Jewish family in the painting, are gathered on the balcony, no one talks and they hardly acknowledge one another.

The two boys, leaning on the baluster railing on the far right, stare intently at something, which takes place in the garden beneath the balcony.The father stands at the center of the painting, next to his two older sons and the three of them read a newspaper. On the other side are the women: the mother and the only daughter. They are holding some kind of needlework on their laps, but they do not work. Instead, the girl is smiling at something beyond the scope of the painting. The mother gazes at the same direction, and she is also glancing approvingly at the girl.

Although they all are busy, the family seem connected. They are comfortable and at ease with one another. If that was “how people ignored each other before smartphones,” perhaps it means that in a way it gave them more freedom. As we can see from the portrait when everyone is so preoccupied, no one pays close attention to what you do.

In 1881 when Krøyer painted The Hirschsprung Family, most of the members of the leisure-class, had both the time and the freedom to enjoy their money. Even the father, the strong man, symbolically positioned at the center, seems unhurried. Although Heinrich Hirschsprung was an industrialist, a tobacco manufacturer, he was not too busy to pursue his interests and became a patron and collector of art and even founded his own museum

I am well aware that, in some  respects, life in the 19th century was hard, especially for women who had limited opportunities and no freedom to pursue their interest and to express their abilities.

But sadly in the Smartphone Age lack of freedom, together with lack of time, are a serious problem for almost every one. The smartphone itself makes it harder to ignore the torrent of demands which arrive via emails and messages.

Unlike Mr. Hirschsprung and his wife who seemed to have all the time in the world, their counterparts today, whom I wouldn’t call “the leisure class” as leisure is such a rare commodity, are always rushed. They work long hours, take short vacations and  are expected to be on call when they are away. Thus, even affluent people often don’t have enough opportunities to enjoy their money.

Walking in Arnold  Arboretum in Boston it occurred to me that I could easily imagine meeting the Hirschsprung family there. But on a beautiful weekend day I didn’t see many contemporary families with children.

Perhaps the Arboretum, which does not offer playgrounds or other activities for children is no longer that relevant for today’s families. With so little free time, they need to make the most of their time together, and  long, leisurely walks along the trees become a luxury.

Besides, there are limited benches to sit together and ignore each other with the smartphone, especially as the internet connection in the park is so poor. 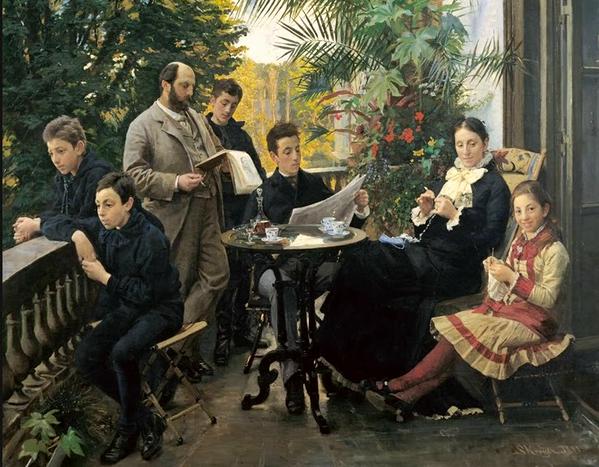