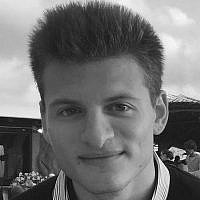 The Blogs
Liad Mansky
Graduate Student at Columbia University
Apply for a Blog
Please note that the posts on The Blogs are contributed by third parties. The opinions, facts and any media content in them are presented solely by the authors, and neither The Times of Israel nor its partners assume any responsibility for them. Please contact us in case of abuse. In case of abuse,
Report this post.

Yes, fascist governance in America, and racist, settler expansionist governance in Israel is worthy of all due rage and condemnation.  But, the politics of rage, and intimately aligned self-purported woke-ness, do not justify bigotry and the promotion of historical falsehoods.  The ever more normalized, fervently Anti-Zionist wing of the Black Lives Matter movement has strayed so far from the tenets of Critical Theory that they are not only an affront to constructive intellectual discourse, but engaging in a dangerous and bigoted promotion of historical revisionism.

In a “Day of Rage” rally in Brooklyn last week, Dequi Kioni Sadiki, the wife of former Black Panther Sekou Odinga claimed that “The European Jews who occupy, slaughter and continue to force millions of Palestinians onto their killing fields called refugee and concentration camps, are the relatives of the Europeans, the Spanish, the British, the Portuguese, the Irish, the Dutch, who kidnapped, slaughtered and forced millions of Africans and indigenous on to slave ships, plantations, reservations, (and) prison death camps.”

Never before did I think I would be contending with the proliferation of genetic falsehoods by and for “the left.”  Not only is Sadiki’s assertion an abominable and futile conflation of “Europeanness” and “Jewishness,” but her biological assumptions disregard study after study of a distinct Jewish genetic makeup.

And what of Mizrahim?  I assumed someone as woke as Sadiki would be cognizant of Israel’s rich ethnic mosaic, of which Jews of African and Middle-Eastern descent are the majority. (This is not to say that marginalization of Mizrahim and Palestinian dispossession is not intertwined-it is, but affirms that identity politics is not the place for baseless conflations and regressive generalizations).

The Black Lives Matter Movement, and what I believe are those fringe elements stretching the confines of it, rightfully centralize power in assessing the world.  However, the power discrepancies in Israel-Palestine, and the perpetual expansion of the former at the detriment of latter, do not justify the belittling of historic Jewish suffering at the hands of Europeans throughout the 19th and 20th centuries.

Sadiki was right in mentioning slaughter, kidnap, and prison death camps, but forgets that Jews too, were victims of this plight.  Does she know that two thirds of European Jewry were wiped out by those “relatives” on account of their “otherness”, their remoteness from whiteness, that is, their Jewishness?  Does she?

Does she know that Zionism (was) an emancipatory liberation movement that sought Jewish autonomy in light of failed integration (to put it lightly)?  In fact, many of those pioneering Zionists, flawed though they were, had fascinating intellectual intimacy and revolutionary proximity to the Black Power Movement that Sadiki’s husband played an integral role.  And while the Black Power Movement, and some of today’s Black Lives Matter movement’s strategic aligning with Justice for Palestine, I think, can be constructive, and illuminate the ideological consistencies between settler expansionism and white supremacy, ignoring the historic status of the Jew as the “other” is morally reprehensible, averse to critical theory and all true emancipatory traditions, and alienates progressive Jewish allies.

Dare we Jews claim historic suffering, suffering that actually persists in our DNA and collective memory?  Dare we align with the down-trodden in a way that also highlights our ugly history when confronted with nationalized whiteness?  Dare we do so, but also acknowledge how our social situation in the United States has so radically evolved?

Today, we Ashkenazi Jews hold real and meaningful proximity to whiteness.  In fact, the privileges that we are afforded grant us that status.  Accordingly, we can and do uphold racist systems in the United States.  Yet, it is in this proximity to and conditional possession of whiteness as well as historical marginalization that Ashkenazi Jews finds their place in the world, and should orient themselves in what seems to be the largest civil rights movement of all time.  Black Lives Matter is imperative, for Black life has never mattered in this country.

For that reason, it pains me to write this, to deviate in any way from the pursuit of true Black liberation.  But, it is in the tradition of intellectual authenticity and consistency, that I am forced to call out blatant bigotry.  That is, contemporary Israeli policy does not grant anyone the right to diminish Jewish history and suffering, especially when the endeavor is to manipulate the oppressed as the oppressor.

Should rallies of the sort persist, in which enraged activists lead impassioned crowds in the denigration of Jewishness, Jewish support for Black Lives Matter will wane, much like it did throughout the Women’s March.

The moment is too important.  I am with Black Lives Matter, but next time you see me, among you, know that my Grandparents arrived in Israel as stateless peoples deprived of all.  This historical reality need not serve as an impediment to Black liberation.