The Magician’s Lie by Greer Macallister

It is 1905 and the woman they call the Amazing Arden is a magician whose fame is on the rise. After her last show, they find a dead man and identify him as her husband; of course, she is the first suspect for this murder. Officer Virgil Holt was in the audience that night, finding himself both fascinated and fearful when she cut a man in half. When he hears about the murder, his superior takes things in hand, and sends him home. On his way, he runs into Arden, who is obviously on the run. Taking her into custody, Holt decides to hear what she has to say in her defense, before handing her over to the certain fate of the gallows. Is she guilty, or innocent? Will this be Holt’s finest hour, or will she escape and make him a fool?

Greer Macallister’s debut novel gives us an interesting tale, which on the surface is, for the most part, ordinary. On the one hand, we have Arden’s story of personal triumph over her suffering and persecution to achieve both fame and happiness. On the other, we have Holt, who has never been anything but second best in his life. Now he has a bullet lodged next to his spine, which the doctors think is too dangerous to remove. This only exasperates his already low self-esteem, setting him worrying that this could cost him his job, his wife or even his life. Then Arden crosses his path, and he sees a chance to prove himself to everyone (including himself). When Arden decides the only way to prove her innocence is to tell her story from the very beginning, starting with her childhood, Holt finds out she also has some kind of magical healing power. Obviously, this last bit is where this story takes on a twist, making it suddenly mysterious and fascinating.

The interesting thing about this book is that the telling of Arden’s life (or Ada, as she’s really called), is that without her having been captured for the crime she says she didn’t commit, it would have been a totally boring story, with the only small exception being the inclusion of magical realism. Together, the tale has an unexpected direction, which intrigues us. Not only do we hope that Arden is telling the truth, but we also begin to pray that she can solve Holt’s problem. However, despite Arden’s miraculous ability, everything else in this book takes place in the real world, albeit over 100 years ago in the middle of nowhere Iowa. This, together with Macallister’s carefully crafted writing style is what will captivate readers, and allow them to suspend disbelief regarding the strange phenomena in Arden’s life. 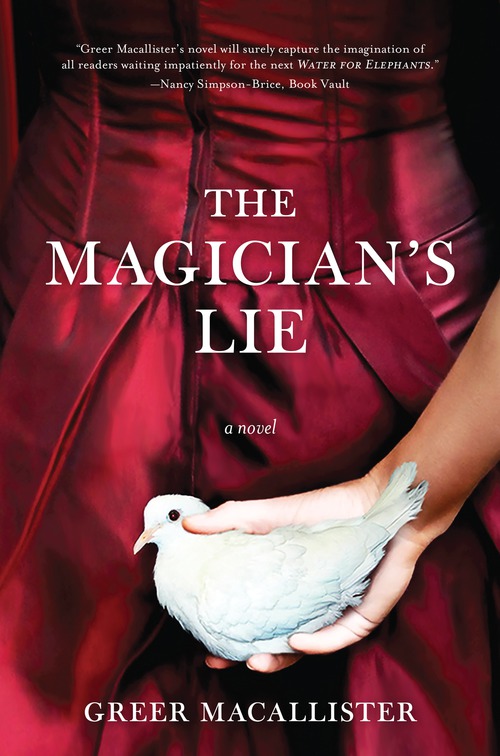 Setting this story so far back in time allowed Macallister to include some real history. One instance is the famous 1903 fire at the Iroquois Theater in Chicago. The more important piece of fact in this fiction is the role of Arden’s predecessor and mentor, which Macallister gave to the real-life Adelaide Herrmann – arguably the world’s first female magician in her own right. This injection of feminism during the time when women were in the midst of their uphill battle for suffrage melds perfectly with Arden’s character, making her all the more believable. The only thing aside from her strange ability that is difficult to accept is Arden having one eye that is half-blue and half-brown, but this only adds to her mystery and charm.

As you can probably surmise from this, I truly enjoyed this book. In fact, only two things keep me from giving this a full five stars. The first was the slightly fairy tale-like ending, despite the (thankfully) unanswered questions regarding both Arden and Holt’s futures at the conclusion. The other was that during some of the descriptions of the action, particularly during suspenseful passages, the wording felt overly dreamlike, if not poetic. While that was fine when she described Arden’s magic act or the romantic parts of the story, in these fast-paced sections this style felt somewhat muddled, making it hard to picture what was happening. Other than that, I found this a delightful and compelling read, which certainly deserves a solid four out of five stars.

r used from Alibris, or from an Indie Bound store near you. I would like to thank the publishers for sending me an advanced reading copy of this book for review via NetGalley. This review also appears on my personal blog.