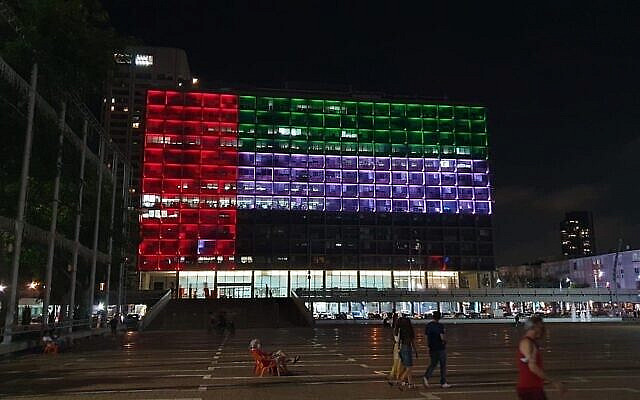 The recent deal between Israel and the UAE, the Abraham Accord,, has been widely accepted as a major step forward for Israel in its attempts to live in peace, a conclusion with which I agree. I have been assessing its ramifications. So far, my analysis has four parts.

For years, going  back to the days of Yassar Arafat, Israel has been getting clobbered in the foreign press by both Hamas and the other Palestinian organizations, including the PLO. Until 1982, Israel was perceived worldwide as the sympathetic underdog to the Arab countries, who were perceived as evil. That began to change after the 1973 war, when Anwar Sadat, a former hawkish general in the Egyptian Army, decided that it was time to stop losing wars with Israel and flew to Jerusalem offering to make peace. That resulted in a treaty in which, for the first time, an Arab country recognized Israel. With Egypt pacified, Israel turned its attention to the PLO, which was continuing its terrorist ways. Initially, Israel drove the PLO back across the Jordan River. However, Jordan’s King Hussein did not want the PLO in Jordan either, so he drove the PLO into Syria from which it went to Lebanon, defeating Israel’s purpose: to get the PLO away from Israel’s border. The result was “the First Lebanon War.” Again, Israel prevailed, this time driving the PLO to Tunisia.

What was a military victory was a public-relations nightmare for Israel, in which Defense Minister Ariel Sharon  made the terrible decision to surround two refugee camps in Lebanon, Sabra and Shatila, and allowing Christian Arabs to slaughter the inhabitants. That  transformed the  favorable public perception of Israel. The leader of the pack was the New York Times’ Tom Friedman who won a Pulitzer prize for documenting the slaughter. Even most Israelis agreed that what Israel had done at the refugee camps was an abomination. Ariel Sharon was fired as Defense Minister. What Sharon had done was transform the image of the Palestinians from evil terrorists into victims. The Palestinians have been playing the victim card ever since.

In 1993, Bill Clinton helped Arafat play the victim, brokering the Oslo accords in which Arafat agreed to renounce terrorism. In 2000, Arafat refused to negotiate further and went back to Ramallah, where he authorized the second intifada. So much for abandoning terrorism.

Between the signing of the Oslo accord and 2000, Rabin  and Sadat were  assassinated and have gone down in history as a men of peace. With Rabin’s death, the old image of Israel as the vicious oppressor and the Palestinians as the victims has re-emerged. That perception has haunted Israel. Obama & the J-Streeters, most of the American Democratic Party, and the Europeans have bought into it.

In fact, Israel has been trying to make peace with its neighbors for years. In 1994 it entered into a peace treaty with Jordan, which became the second Arab country to establish diplomatic relations with Israel. One of the byproducts of the recent UAE deal is that it may well have changed Israel’s image from the evil oppressor to a nation seeking peace.

When Obama failed to get Israel to enter into a peace treaty with Abbas, Obama blamed Israel. He got almost the whole Democratic party to join him in characterizing  Israeli as the evil oppressor. Netanyahu was not so naive. He understood that the threat to Israel was not the Palestinian Authority, but Iran/Hezbollah and Hamas.There is no way that Israel was going to enter into a peace agreement which would NOT bring it peace.

Netanyahu had a very different idea of how to bring Israel peace. As an M.I.T.-trained M.B.A., he believed in free markets and thought that they could make Israel strong. He turned out to be quite right: since Netanyahu was Finance Minister in 2003, Israel has become a major economic power in the Middle East. Netanyahu has successfully been working for years at improving relations with the Sunni Arab countries, emphasizing the economic benefits of better relations.. For example, he met with the UAE’s Sheikh Mohammed bin Zayed in 2018 to help bridge the gap between the countries. Now, the UAE is looking forward to economic interaction with Israel. Netanyahu has also improved relations with Saudi Arabia. After the Israel/UAE deal was announced, Saudi Arabia announced that its airspace would be open to ALL countries. This was not the first time that Saudi Arabia had relaxed its prohibition on using Saudi airspace for flights to and from Israel; a couple of years ago, Saudi Arabia allowed Air India to do so. That has allowed Israelis to fly not only to India, but Southeast Asia.

Part 3.The Sunni nations and Abbas.

The Sunni Arabs are not so gullible as Obama, the J-Streeters, and the Europeans. In recent years, the Sunni Arab countries finally got sick and tired of all Abbas’ whining. They knew that Israel was the enemy of Iran and a force both economically and militarily. Saudi Arabia leads the way in this respect, since it is actually fighting a war with Iran and saw Israel as an ally. Abbas, in contrast, could offer them nothing. Rather, he was just a drag on their economies and political capital.

Part 4. The split in the Muslim world.

The UAE deal brought a split in the Muslim world to the fore. While most of the Sunni Arab countries have been sympathetic towards the deal, Iran, Hezbollah, Turkey, Hamas, and Abbas have not. Abbas claimed that the deal stabbed the Palestinians in the back. Turkey threatened to break off diplomatic relations with the UAE. Iran’s Ayatollah Khamenei said that the UAE had betrayed Islam. Hezbollah’s Nasrallah called the deal a betrayal of Arabism.

Hamas’ reaction has been fascinating. Initially, the chief of Hamas’ political bureau, Ismail Haniyeh, who is NOT based in Gaza, criticized the deal. At the same time, for roughly two weeks, Hamas in Gaza fired at least a dozen rockets and launched hundreds of incendiary and explosive balloons into Israel. It stopped these attacks after announcing that Israel and Hamas had entered into a truce. I assumed that the truce had been brokered by the Egyptians, who for years have been acting as the intermediary between Israel and Hamas in Gaza. In fact, the truce had been worked out between Haniyeh and the Foreign Minister of QATAR! The conversation between Haniyeh and the Foreign Minister took place while Haniyeh was in Lebanon, apparently meeting with Hezbollah on how to respond to the UAE deal. It appears that Haniyeh views the UAE deal as a threat to Hamas and its allies. He has simply pulled rank on the Hamas folk in Gaza and told them to stop screwing around with Israel independently. He, like Netanyahu, sees the relationship between Hamas and Israel as part of a larger whole.