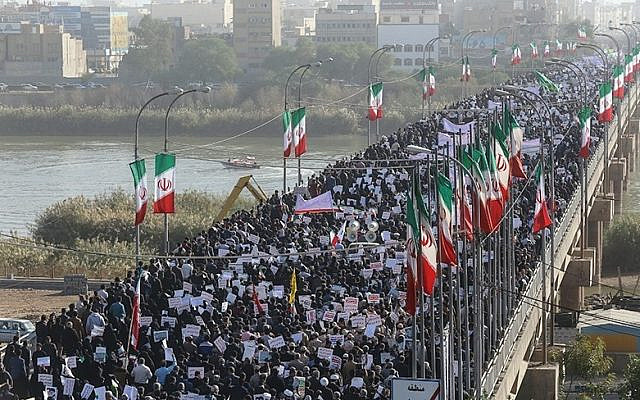 Against the backdrop of a further harshening of the regime’s tone towards dissent to silence those voices that have consistently called for a change of the guard, often to the tunes of old monarchist slogans, organic popular protests have taken shape throughout the Islamic Republic. It’s a challenge to the leadership many have come to understand as the prelude to a widespread revolutionary movement.

And though one would be hard-pressed to read such news in Iran’s media – such is the control Tehran exercises over its press corps – it remains nevertheless true that acts of rebellion against the State, and more specifically the State’s brutal policies against its people, have dramatically increased in both popularity and intensity.

Regardless of the many great threats of reprisals individuals may face should they openly voice their anger against the authorities – acts of rebellion that are often equated to apostasy under the Ayatollahs’ absolutist theocratic rule, Iranians of all ethnicities and denominations are calling for Tehran’s toppling; not to dissimilarly, one may add, from those grand cries of freedom the Arab Spring Movement became famous for back in 2011.

Revolution, as it were, is on the lips of most Iranians in more ways than one. And if not all Iranians have espoused some of the Opposition groups’ political views, whether republicans or monarchists, they all understand that as the regime stands today, there is no hope for a dignified future.

Crushed by debilitating inflation rates (40%), high unemployment and the neverending erosion of their civil liberties, Iranians have found their back so far up against the wall that the only option left has been forward. And indeed, regardless of the heavy price they know they could face should Basij or Sepah arrest them, countless men and women across Iran have chosen resistance.

In this widespread push against the Leadership, the province of Ahvaz, which borders Kuwait, has witnessed the most violence – further proof that Tehran has a two-speed policy when it comes to its ethnic minorities. With a majority Arab population, Ahvaz has been center-staged to brutal state repression over the years. Back in July 2021, Tehran deployed its forces to dispel popular protests against the province’s acute water shortage.

At the time, Diana Eltahawy, Deputy Director for the Middle East and North Africa for Amnesty International noted, “Using live ammunition against unarmed protesters posing no imminent threat to life is a horrifying violation of the authorities’ obligation to protect human life. Protesters in Iran who take to the streets to voice legitimate economic and political grievances face a barrage of gunfire, tear gas, and arrests.”

“Iran’s authorities have a harrowing track record of using unlawful lethal force. The events unfolding in Khuzestan have chilling echoes of November 2019, when security forces unlawfully killed hundreds of protesters and bystanders but were never held to account. Ending impunity is vital for preventing further bloodshed.”

Today Ahvaz is protesting catastrophic inflation. “When the price of bread becomes unattainable for most families there is no more ground to cede … we are dying a slow death by economic strangulation and rebellion becomes an act of self-preservation,” confessed an activist under the cover of anonymity.

This Friday saw widespread protests in the streets of Khuzestan, a flashpoint of Ahvaz’s resistance movement against the regime. As people took their anger to the streets, the regime deployed its much-feared security apparatus, taking to rooftops to shoot tear gas at protesters.

Below videos are exclusive to the Times of Israel:

While it is difficult at this stage to assess with accuracy if indeed lives were lost in the clashes, sources have confirmed the use of live ammunition in several neighborhoods and mass arrests by Sepah.

In line with state policy, the cities of Susangard, Hamidiyeh and Shadegan suffered internet cuts – a measure Tehran has used in the wake of the Arab Spring Movement to prevent the mobilization of activists on the ground and blur communication lines with the outside world.

Today, it is labor activists rather than political activists who found themselves in the firing line of the regime, the latest to be labeled enemies of the state as they have dared condemn catastrophic working conditions and the erosion of living standards across Iran.

“Iranian labor activists have been at the forefront of the struggle for the rights to free association and assembly in Iran, and they have paid heavy price from government repression,” said Tara Sepehri Far, senior Iran researcher at Human Rights Watch. “Iranian authorities should recognize the rights of labor unions and engage in meaningful efforts to address the country’s mounting economic problems.”

Over the past 12 months, an estimated 69 labor activists have been jailed and dozens summoned by the authorities for interrogation. As of last month, Tehran has focused its attention on the Iranian Teachers Trade Association (ITTA), which for the past three years has lobbied for better wages and the guarantee that all unpaid salaries would be honored, cracking down on those who continue in their views to defy the Leadership.

In a country where disapproval is considered an act of war against the holiness of Khomeini’s Revolution, activism is an act of treason.

Before Iran’s socio-economic deterioration, the lives of millions of Iranians have become unbearable. For all its promises of social advancement, the Islamic Republic has reduced its people to mendicity.

Iranian MP Shahriar Heydari commented earlier this May to Iranwire that buying meat and fruit had now become a “wish” rather than an intention for most ordinary Iranians.”

It would be foolish to read the word uprising into those protests, but it is nevertheless clear that a line has been drawn in the sand. Fear no longer controls Iranians.

In truth, there is little the regime has not committed against its people by way of atrocities … what is left to fear when subservience equates to a death by attrition? Revolt then becomes an act of self-preservation.

How Iran’s opposition groups both within and without will utilize this new-found boldness remains to be seen.