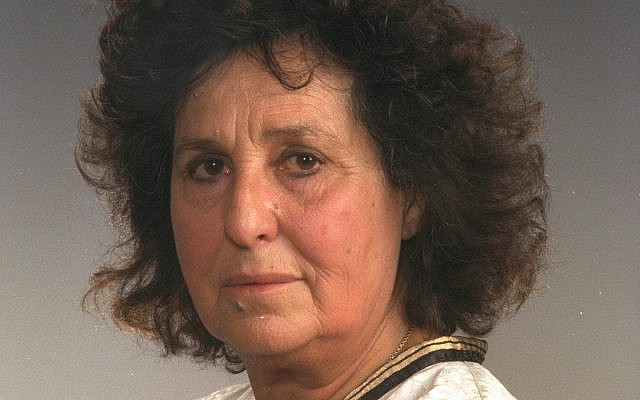 Geulah Cohen passed away, at the age of 94. She was a well-known Israeli politician (Likud and Tehiya praties), won the Israel Prize in 2003 and was a legend during the British Mandate era, when she was a radio announcer for the Lehi underground movement and was arrested by the British while broadcasting in Tel Aviv.

I was privileged to host her 90th birthday party. I prepared for the event by delving into the many interviews she gave over the years – when she was in the underground, prior to the founding of the State, as a member of the Knesset, and when she won the prestigious Israel Prize. Here are some of Geulah’s pearls of wisdom:

“A fighter is someone who at every time and place says ‘No’ to the existing reality in the name of ‘Yes’ for the longed-for reality.”

“From all the pleasant music I hear at weddings, the sweetest sound to my ears is when the groom breaks the glass, a remembrance of the destruction of the Holy Temple. And from all the symphonies in the universe, the one I love the most is the sound of our Hebrew language when it is heard in our streets in new immigrant melodies: a Russian or Anglo-Saxon melody, a French or Moroccan melody.”

“It says: They are a nation that dwells alone (Numbers 23:9) – Is this a blessing or a curse? If, instead of waiting for others to remind you that you are a Jew, you will remind yourself every morning that you are a Jew, if self-awareness and not coercion will determine your experience as a Jew – then the curse will turn into a blessing.”

“There is no greater robbery than when the Ministry of Education robs from Israeli children a deep encounter with our spiritual and cultural assets and takes away from them a meeting with our nation’s heroes of the mind and of the spirit. It’s not only that these assets and heroes are hidden, but they are mocked as well. If for robbery of a copper penny you are brought to court and found guilty of a criminal act, what will be the punishment for robbery of our spiritual treasures?”

“As someone who never stops feeling that she is the daughter of a 4,000-year-old people, it always seems absurd to me when a reporter sticks a microphone in front of me and after less than one minute announces ‘Your time is up.’”

“The ‘new news’ we read today is old by tomorrow, and yet the ‘old news’ in our sources, our holy books, is renewed every single day. We need to find a way to make this ‘old news’ part of the ‘new news.’”