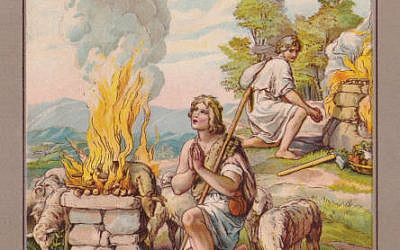 When their two children pressed Adam and Eve to explain why they were forced to leave the Garden of Eden, Cain and Hevel were told conflicting stories about why they had to leave Eden. The first tale concerned their good friend, the talking snake, who was always giving them advice. This tale was connected to a story about a tree whose fruit was so delicious and tempting that God put it there just to test Adam and Eve. It seems that God had forbidden man to eat fruit, but the snake convinced them otherwise.

The story that fascinated Cain most was about Adam and Eve’s punishment for discovering the secret of childbirth. This apparently was why his parents had been made to leave the Garden of Eden. God had reasoned that with children, Adam and Eve could take over His world.

Cain rather thought he would have liked living in the Garden of Eden. His mother would have more time for him and he wouldn’t have the daily chores of collecting wood for the fire, or of helping out with the harvest—two tasks which he detested. He wished he could have had the experience of snapping his fingers at the trees and commanding them to drop their fruit into his waiting hands, as his parents had done. But had his parents not left Eden he would not have been born.

Cain was a confused young man who angered easily. Until Hevel came along he had his mother to himself. Having a younger companion wasn’t all that bad, especially since Hevel worshipped Cain and would do anything for him. There was no real reason for Cain to be so unhappy and dissatisfied. And indeed, when the harvest was good, he would have a sense of pride in his work and not think too much about the easy life that could have been his in Eden. But when it rained before he could get the harvest in, or when his younger brother, Hevel wasn’t quick enough to serve him, he would brood about his fate.

If I hadn’t been born, I wouldn’t have to work or suffer. I wouldn’t have to look after Hevel or help out in the garden. I would be free, with nothing to worry about. These unsettling thoughts he kept to himself. If only I had someone to talk to! But there was no one.

Cain was too busy to brood for long. Sometimes he shot an animal with his bow and arrow, burying the evidence immediately for he had mixed feelings about killing animals: the smell of blood disgusted him, yet it was exciting to have the power to cause the pain and squirming that preceded the sudden end of all life.

One particular day everything Cain did turned out wrong. It was a windy hot day and sand was in everything. He was fencing a garden for his mother when a heavy stone dropped on his foot. He blamed Hevel.

Where is he? He’s always pestering me, asking me what he can do to help. And today, when I need him, he’s off playing with that disgusting pet sheep of his.

He cried out bitterly, “Oh that I was in the Garden of Eden, where the weather is always pleasant, where one doesn’t have to tend the fields.”

At times like this Cain had a place of refuge, a nearby mountain where he would go to calm his uncontrollable anger. He decided to place some corn meal on the sacrificial altar he’d built there, in hopes of settling his mood. Just then Hevel came by and he impulsively asked him to join him.

Hevel thought Cain would be pleased if he took one of his sheep. He and his big brother would eat roasted mutton after the sacrifice.

But this pleasant vision of brotherliness was not to be. The bleating of the sheep, the blood and the smells disturbed Cain and as they walked up the hilly path Cain’s anger mounted.

“Can’t you walk faster? Why are you dragging your feet?”

Hevel was used to his brother’s moods. He was proud to have been invited on this expedition with his big brother so he explained without rancor, “My sheep is heavier than your grains. That’s why I am walking slower than you.”

“Who told you to kill a sheep? It is so bloody and messy! And you smell!”

And so it went, with Cain’s anger becoming an overwhelming force.

They arrived at a clearing and gathered stones to build two simple altars with room at the center for the offering. Cain put his grains on his altar and Hevel placed his slaughtered sheep on his altar. There was a peaceful moment while they both concentrated on the meaning of their sacrificial offering.

Nothing happened to the corn meal! Cain put more energy into purifying his thoughts; still nothing happened. His grains did not burn. But Hevel’s sheep offering did. Cain was amazed at the unfairness. Could the killing of an innocent creature be preferable to his own simple peace offering of corn meal?

Cain was furious. He yelled at God and grabbed a stone from the altar, “So it’s shedding blood You want!”

In an outburst of anger, he struck Hevel on the head. Hevel dropped to the ground. He lay still, unmoving. It was over. There was a long moment of silence.

Cain went over to inspect his deed. Oh my God! What have I done? I’ve killed my brother!

Cain’s immediate reaction was to deny his responsibility for his brother’s death. It was an accident! I didn’t mean to do this!

He quickly cleaned up his brother’s blood, looking around to see if anyone had seen him. Then he dug a deep hole in which to bury his brother, just as he had done with the remains of the animals he had hunted.

Although he knew he had done something terrible, some part of him expressed pride at the cool and efficient manner in which he was disposing of the evidence.

When he was finished, he sat down thinking, Hevel is dead! I will be held responsible. What can I do to atone for my deed? He couldn’t face his parents. He couldn’t explain to them what he had done. Rather than go home; he went out into the desert to think through his future course of action.

It’s their fault! They shouldn’t have left the Garden! He thought in confusion. God didn’t plan that I be born. He has been pushing me to this act. Should I finish the job and kill myself as well? There’s no one left who cares about me. The best thing I can do is to disappear off the face of the earth.

Cain put his face into his hands and wept. If only I had someone to talk to! But he was alone with his thoughts in the desert.

The vultures were flying in a circular pattern, waiting for his decision. Why make it easy! If I take my own life, it will all end with me. Perhaps this is what God planned? But is this what I want to happen?

He left the desert and began wandering around the world. He finally settled east of what he believed was Eden. He found a mate and had many children, grandchildren and great grandchildren. He remained an enigma to them. They always wondered about this restless, driven man who could not find contentment despite all that he possessed.