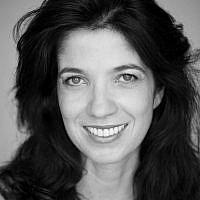 The Blogs
Sharon Chait
Apply for a Blog
Please note that the posts on The Blogs are contributed by third parties. The opinions, facts and any media content in them are presented solely by the authors, and neither The Times of Israel nor its partners assume any responsibility for them. Please contact us in case of abuse. In case of abuse,
Report this post.

I’m in the middle of hosting 11 non-Jewish leaders from North America. Comprised of academics, political, religious figures and others, the group is seeing the sights and meeting the people of Israel. And Israeli donors are covering the cost.

It’s a reversal of the well-known model of Americans writing checks for Israel, and one that has a fascinating story.

About four years ago, a group of Israelis from the Western Galilee traveled to Omaha and Indianapolis, to meet with Jewish leaders and business leaders. They are volunteers with the program I direct:  a Jewish Agency Partnership2Gether that connects some 16 American regions, mostly from the Midwest, to the Western Galilee, Akko and Matte Asher and Budapest.

The volunteers, members of our Partnership Friends Club,  loved Omaha and Indianapolis, but were saddened to hear their worries about BDS and attempts locally to delegitimize Israel. “I remember standing there and just wishing we could transport local opinion-shapers to Israel,” recalls the committee chair, Orit Katzenstein Guri. “We wanted to show influencers from the Midwest what Israel is really like.”

When these Israeli volunteers got home, they started planning. They wanted to impact the conversation in the American mainstream. And they also wanted to send the Jewish communities of Omaha, Indianapolis and elsewhere a message that Israelis support them in the challenges they face.

How would they show this solidarity to American Jewish communities? By getting residents of the Western Galilee to put their money where their mouths are and pay for the trip.

They started a crowdfunding campaign and secured 80,000 shekels in donations. On Monday, their dream became a reality, as their delegation touched down in Israel. “I feel great privilege to help support our partners communities in the USA and to show the non-Jewish leaders our life in Israel,” said Yona Fleischer, an active committee member.

Our guests include Cheryl Kimberling, president of the Fort Worth Multicultural Alliance and Michael Patton, a pastor and president of the South Bend chapter of the National Association for the Advancement of Colored People. Each non-Jewish visitor has arrived with a staffer or volunteer from their local Jewish federation, who we are also hosting.

We have been exploring multicultural Israel, with visits to Jewish families, an Arab community club, and an Ethiopian-Jewish center. We have seen sites that tell the story of Israel’s security challenges, and places that tell stories of Israeli optimism and hope. They met local Jewish and Arab politicians and leaders, and visited several of our community and social projects.

Our visitors are seeing that, contrary to the perception of many Americans, Israel has nothing to hide, and every reason to welcome people to explore the country and the complicated questions we face. And the fact that normal Israelis, amid the pressures of work and family, were prepared to invest years raising funds to show off their country, speaks volumes.

Tomorrow,  Friday the COL members are heading to Tel Aviv and they will spend the Shabbat in Jerusalem. We are confident that the rest of the visit will be very meaningful for them and that they will witness our life, challenges and opportunities and will return to America ready to talk about the country they have seen with their own eyes.

About the Author
Sharon Chait is putting the Western Galilee on the map for American Jews. The former Pepsi food scientist switched her focus from cola to community-building in 2005 — initially in the US and then in Israel. Today, she directs the Jewish Agency’s Partnership2Gether program that connects some 17 Midwest communities to the Western Galilee (Nahariya, Matte Asher and Akko municipalites) & Budapest, and unites them around cultural, social, medical, educational and economic initiative.
Related Topics
Related Posts
Comments