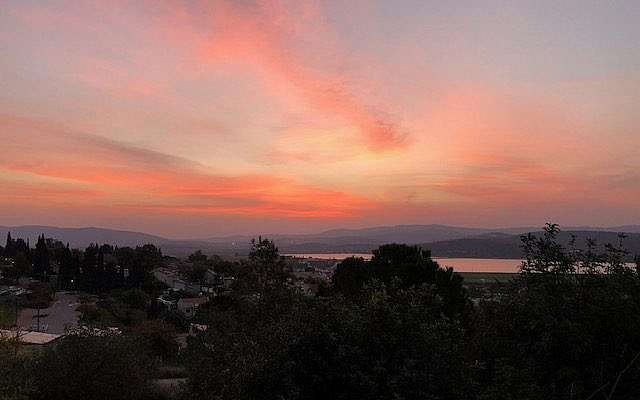 Sunrise over the hills

At the beginning of the academic year, we teachers in Israel all receive dates of exams for our students. In December, our year 12s (final year of high school) knew their exams were imminent and should have been working hard accordingly. But, obviously, this year has been different. We have been popping in and out of school, like meerkats in and out of their den, not knowing whether we will meet again on screen or almost (mask included) face to face.

The first English exam was scheduled during this, our third lockdown, and we foolishly believed it would be postponed or even cancelled due to the confusion of the year so far and the impact Corona has had on learning. And yet, three days before the exam’s date, we received a message from the Ministry of Education: the exam would go ahead as planned, during lockdown, unless we wanted to reschedule it for February. In February, the students have another exam, meaning they’d have two exams to prepare for. More stress. So we followed our gut instinct and told the students the exam would go ahead. To say they panicked would be putting it mildly. I received messages and calls either telling me they were not ready and/or sending me masses of work to check if it was okay.

When the dreaded day arrived, I was calming down my students outside the door of their exam room, telling them they did know how to speak English and everything would be alright. One of the students looked at me and said: “Why weren’t we allowed to come into school to learn for our exams, when we’re allowed to come in to take them?”

Needless to say, I didn’t have a satisfactory answer for him. I just responded, “Silly, isn’t it?” which didn’t exactly make him feel better.

It would be easy to watch the news and get angry and frustrated with the Charedim who are opening some of their schools and refusing to follow the rules of the lockdown. The clashes I’ve seen with police make me very sad indeed – they simply convey even more how this group of people are not prepared to follow the same laws as everybody else and do not accept Israel for what it is, our country we must defend and, if necessary, die for. And yet, we must also not be so hasty. My parents, for example, who are quite right wing, brought me up to also be right wing. When I started questioning them as a teenager, the shouting matches always ended the same way: my dad telling me I didn’t understand and I was naïve. In fact, he still tells me I am idealistic and haven’t grown up when it comes to politics, just because I believe one day it will be possible to have an equal and fair society for everyone.

Why did I spend the years of my youth, before my eyes opened, believing my parents? Because that’s what we do. Our parents bring us up in the way they believe is right, and we believe in it. I remember some of my closest relatives coming home from their orthodox Jewish school one afternoon, a few years ago, and telling me, “When there is a giant catastrophe in the world, God will save the Jews first, before anybody else”. That was what they had been taught by their religious teachers.

I read a heart-breaking article yesterday about how the Charedim feel there is no one to turn to anymore. Their own Rabbis are advising them poorly, encouraging them to break the rules, which in turn leads to death; Netanyahu is no longer to be relied on; and the outside world has turned its back on them, blaming them for the rise in Corona statistics and not considering how each death and loss for them is just as painful as it is for us.

In times like these, we all need to be able to trust in something.

Three thousand miles away from most of my family and most of my friends, a world away from the culture and language I was immersed in and from which I profited in both my professions – English teacher and writer – the question then arises for me: in what do I trust?

Some weeks ago, an Israeli student of mine questioned me as, new and unsuspecting, I walked into the middle of a boisterous and cheeky (although they turned out to be very lovely) class: “Who are you?”

It’s a question new Olim ask themselves a lot, I imagine. Who am I? I know who I was, and what I was successful in, but what does that matter now, when I can only just communicate effectively, when no one knows my history or my story, when I am building friendships from scratch and trying to convince people they can trust me for who I am.

In what can we trust?

Each morning I go for a 10K run around the outskirts of my kibbutz. It is always a refreshing and gorgeous route, through forests and over hills, but this time of year even more so. The red flowers are astonishingly beautiful with their silken sheen. The purple flowers are like little elves’ spears, popping up all over the place, clinging together in little clusters. The green is so green and the sunrises are often layers of pink, yellow, orange and red, as though the sky is quite literally on fire. And this morning, more than any other morning, I heard, and then stopped to listen to, the beauty of the vibrant, brilliant birdsong which was more powerful than any music I listen to in my earphones.

And it is in this, now, that I trust. The balance of nature. The world as it is meant to be. The fact that everything has a time and a place, and this too shall pass. And although humans have been visibly shaken, disturbed, traumatised, destroyed by all of this, the natural world has not.

The birds keep singing, and the flowers keep growing, and so it will be for a long, long time.  And in this I trust.