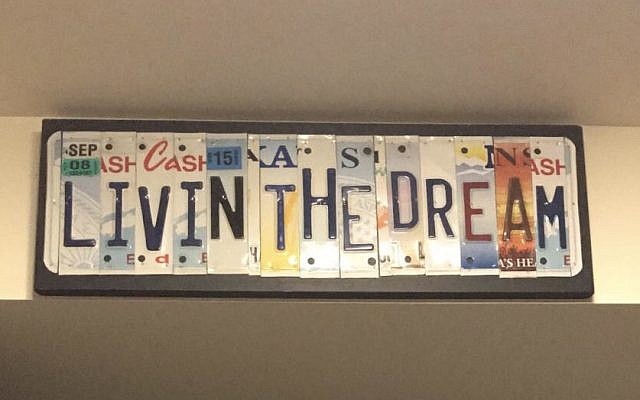 We seem to have a love affair with fantasy… We have dreamt about living under the sea and imagine sea creatures living amongst us. How else do we explain the fascination with the movie Splash (a movie which dates me), or the enormous popularity of the cartoon The Little Mermaid. Both movies are about a mermaid, half woman half fish who longs to live on land. If she leaves the ocean she has to give up her tail.

I read a column by a fellow blogger who described feeling like a mermaid after she moved to Israel, a fish out of water. I pondered what it meant to be a mermaid. For some it means showing up and living in a new environment with their tail on, for others it means taking off their tail/Jewish hat. Pretending to be something they are not.

I grew up in a happy Jewish bubble, attending Jewish Day Schools and Jewish camps. I felt at home in my Jewish skin. When I graduated from Jewish Day School and attended public high school I did not know exactly where I fit in. I felt like a mermaid, a fish out of water. It’s extraordinary now when I’m in Israel, I’m wearing my tail/Jewish hat in my Jewish skin and finally swimming in my Jewish ocean. I’m an American fish swimming in the Israeli ocean. I’m not unique, Israel is a mosaic of peoples from around the globe, all swimming in the same Jewish ocean. What unites us is our Jewishness, a fierce pride in our peoplehood.

I can’t say the same for some of my fellow Jews, living outside of Israel. Many are conflicted with just how outwardly Jewish they should appear. Always feeling like a fish out of water. We are a complicated folk, we think if we blend in the world will like us better. It comes from two millennium of persecution for JUST BEING. It seems childish to worry about what others think of us. If we embraced our essence, living life to the fullest, we could be at peace. Let come what may, enjoy life as we know it. Breathe deep people, we are free…

My first shock of reality of the division among Jews who love Israel and those who are conflicted came when I attended our Jewish friends’ daughter’s wedding. Over cocktails I proudly told a guest we had recently bought a home in Israel. Without missing a beat, the “gentleman” said negatively,”are you a Zionist?” I was stunned. I asked him if he was a Jew, spun on my heals and turned away. It hasn’t left me.

Buying our home in Israel, near “the green line” in Jerusalem and being proud Zionists are all HOT BUTTON issues. I scratch my head. I’m not sure when or how it shifted. My generation and close circle adored, supported and helped build Israel. Some members of our kids’ generation and unfortunately some of their parents now do not. In their eyes Israel went from being David to Goliath.

Commuting between two large ponds, Lake Michigan and the Mediterranean Sea, while jumping over the Atlantic Ocean, can be disorienting. I began studying Buddhist theory, and now practice meditation. Meditation has a calming affect, gradually you feel teflon coated. It has helped clear my mind. Maybe if everyone in the Middle East meditated all would be ok? The greatest lesson I learned from this ancient approach is the concept of paradox.

When Israel was the underdog fighting for its survival, the American Jewish community was united in supporting Israel. As Israel matured and gained strength, some members of our tribe began to see Israel as the aggressor. Regardless of facts, arguing with zealots who believe they are “fighting the good cause”, is pointless. What is the cause? I see Jews, Muslims and Christians coexisting. They are practicing their faiths, raising their families and have abundant opportunities unlike the rest of the Middle East. There is representation in the government of all faiths and people. Any citizen can run for government and work within the system to change it.

I feel American when I’m in Israel, and Israeli when I’m in America. I’m a Mermaid. People see my tail (Jewish/American) and that’s okay. Besides mermaids are super cute! I’m living a fantasy/dream which only those brave enough to have the adventure of their lives will be able to experience.