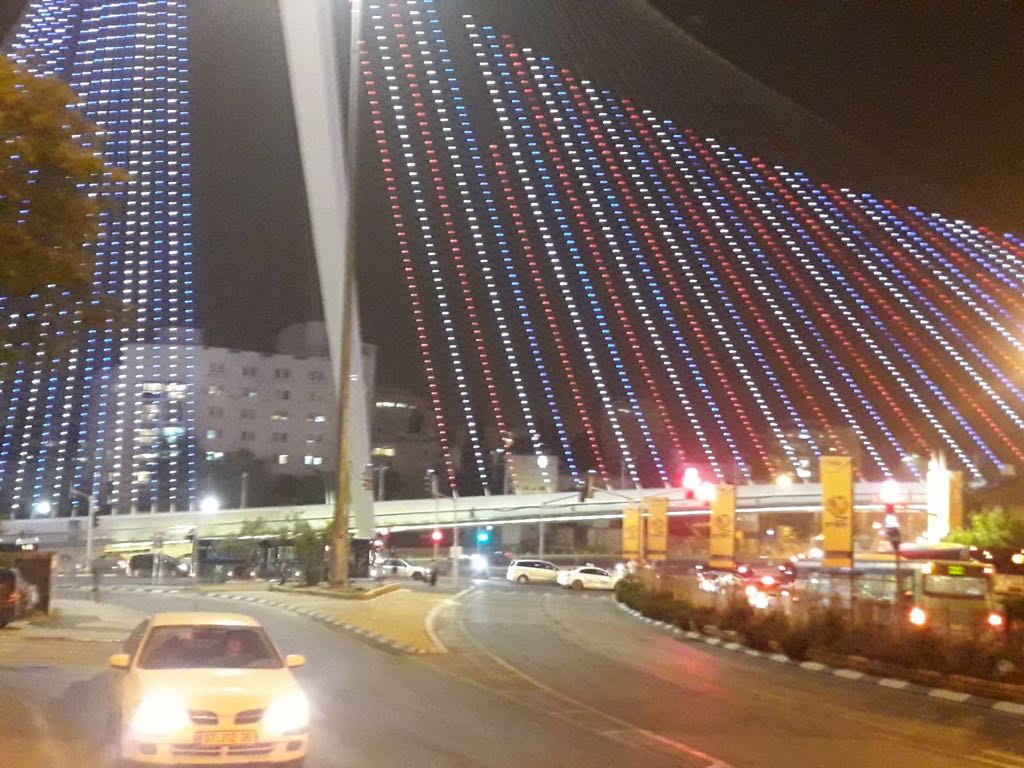 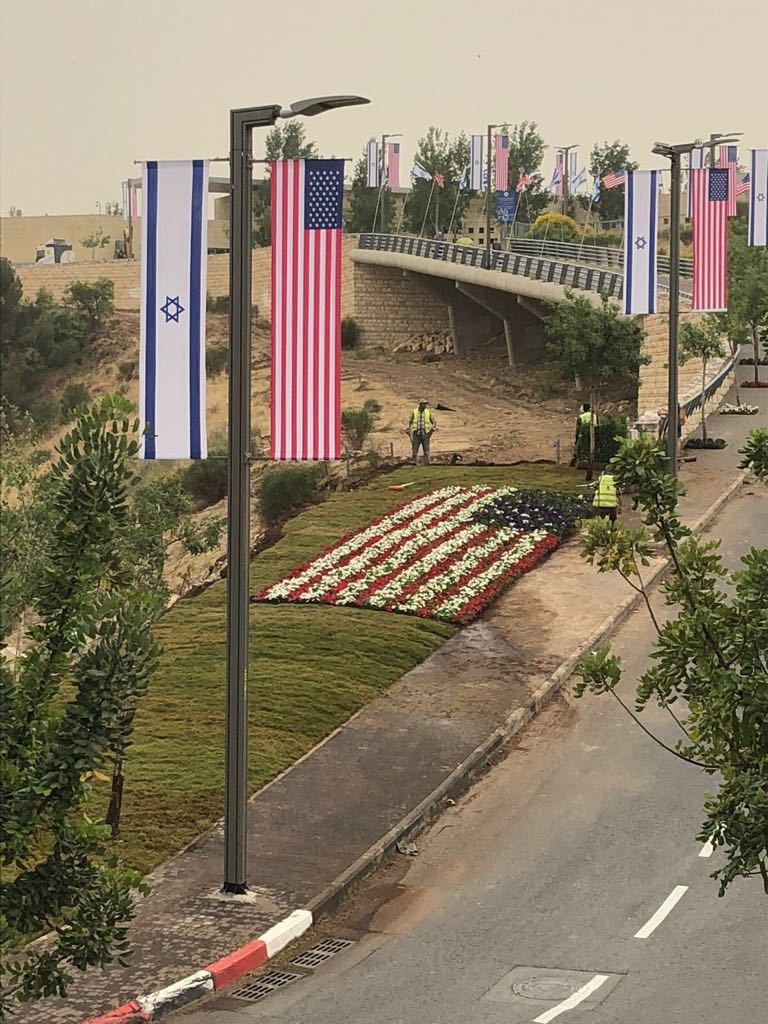 US Embassy just up the street from our home. The flower bed flag is upside down. Very Israeli!

I wrote this piece on May 14, 2018 (preblogging) and sent it to several friends. I wanted to share in my excitement as the US Consulate in Jerusalem became the US Embassy. In honor of Purim I decided to dedicate this post to Trump and Achashverosh both who decided to support the Jews…

My parents were proud Zionists. They belonged to a youth movement called Habonim (the builders) in Chicago. The goal of Habonim was to encourage its members to move to Palestine. At 18 my mom hitchhiked to New York to attend a leadership convention on Zionism. She was asked to speak and shared the dias with Golda Meir. After she spoke Golda went over to her, kissed her on the cheek and called her a Bat Zion, a daughter of Zion. She never wanted to wash her cheek again. My mom then joined thousands of euphoric and passionate Zionists dancing in Times Square as the vote was cast by the UN. Israel was declared a state, legitimized by the WORLD.

As newlyweds, my parents dreamt of moving to Israel (making Aliyah) as many of their Habonim friends were doing. Golda made Aliyah from Milwaukee. We all know what she did… My parents went to Israel in 1953 (Israel was five years old) to live on a kibbutz with the intention of making Aliyah. My mom taught pre-k and my dad shoveled chicken sh-t. My dad was the first truly metro guy, loved his clothes and a great hairdo. He could not see making a life there. Disillusioned, they returned to America and raised a family.

My Zade and Bubby (Dad’s parents) were also Zionists. They came separately to America as teenagers from Pinsk, in Eastern Europe, not far from where Chaim Weitzman (first President of Israel) was born. My Zade and his buddies discussed the Zionist dream. He was talked out of moving to Palestine/Israel because of the malaria scare, and came to America in 1910. My Bubby had a sister who bravely moved to Palestine, married a Chassidic man and settled in Bnai Barak near Tel Aviv. My Bubby and Zade visited Israel often and discussed buying a second home in Israel near the family, but never did.

What motivated us to buy/build a home in Israel? We wanted to fulfill a three generational/two thousand year dream…Our home sits at the base of the street leading to the US Embassy in Jerusalem. When we bought our condo, we were told that someday the US Consulate would become the US Embassy. We never imagined we’d see that happen in our lifetime. We often joke that living close to the US Embassy is either a safety zone or a target. We prefer to think that we live near a good friend.

We watched the ceremony of the unveiling of the US Embassy live on Ynet (news from Israel in English– highly recommended) from our home in the US. We were relieved not to be in our Jerusalem home that day. Every dignitary, car, and bus had to pass our building to access the road to the Embassy.

It took the courage of one brave president (who has Jewish children and grandchildren in the White House, WHICH IS A MIRACLE) to declare Jerusalem as the capital. We have considered Jerusalem our heart and soul, the capital for the past two thousand years.

Today I stand a bit taller and breathe easier. The world’s greatest superpower stands with Israel. US and Israeli banners fly side by side. I’m a Jewish American. We are the luckiest Jews in the history of world Jewry. A safe haven exists for Jews in The US and Israel. We can CHOOSE to live in Israel, a pipe-dream seventy one years ago. Israel has more friends in the world than ever before: Canada and parts of Europe and Eastern Europe, parts of the Middle East, China, Japan, India, etc. We have the ability to say, study, practice, argue, debate, celebrate and co-exist with Muslims, Christians, and Jews in the US and Israel…

I used to try to imagine my mom’s passion as she described the day she witnessed the declaration of the State of Israel. Most lessons are best learned through experience… Witnessing the Consulate become the Embassy is minuscule compared to what my mom experienced, but I now have a glimmer of understanding.

The United States of America and Israel are miracles and should be cherished…God Bless them both…We should take a moment and say a prayer of gratitude (shehechyanu) for this glorious moment.

With heartfelt gratitude,
I say AMEN!