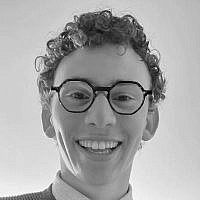 The Blogs
Jacob Samson
Apply for a Blog
Advertisement
Please note that the posts on The Blogs are contributed by third parties. The opinions, facts and any media content in them are presented solely by the authors, and neither The Times of Israel nor its partners assume any responsibility for them. Please contact us in case of abuse. In case of abuse,
Report this post.

Last May, I spent hours on Twitter, doomscrolling through comments and videos pinning the responsibility of the deaths in Gaza entirely on Jews—all while watching the Iron Dome intercepts rockets fired from Gaza, through my window in the central Israeli city of Bet Shemesh.

Currently, a year later I find myself among the infinitesimal group of Sabbath-observant Jewish students on campus at Queen’s University. While there are hundreds of Jewish students on campus, the community of Sabbath-observant Jews on campus comprise no more than five students. As a somewhat invisible minority within the Jewish community at Queen’s, I felt that rejecting the IHRA definition of antisemitism would have a disproportionate effect on me. Since starting at Queen’s in September, I have carried out the entirety of my activities without wearing a kippah—a religious head covering for Jewish men—save for attending Jewish functions at Chabad or Hillel. Then, during Passover, in the midst of final exams, I heard that members of Queen’s University Faculty Association (QUFA) intended to bring a motion rejecting the IHRA definition of antisemitism. The thought running through my brain was that I had clearly made the right decision to not wear a kippah on campus.

Before I go any further, it’s important to mention that the IHRA definition of antisemitism states that “criticism of Israel similar to that leveled against any other country cannot be regarded as antisemitic”.

The rejection of the IHRA definition of antisemitism is problematic for several reasons. I’ll start off by rewinding to the first week of April, to give an example.

At the beginning of April, The Queen’s Journal released an op-ed about the treatment of Palestinian students, which expressed explicit support of divestment from Israel. The article was posted on Instagram, where numerous Jewish students left comments expressing their concern about the antisemitic undertones of the article, given BDS’s comittment to the destruction of Israel as a Jewish state. Ultimately, the post was a breeding ground for comments such as “Zionists should feel uncomfy on campus”. I left a comment briefly mentioning BDS’s antisemitic goal of the destruction of Israel, while also questioning how the article did nothing to foster peace or coexistence in support of a just future for both peoples and an end to the conflict. I was quickly slandered and labeled as a “racist” and “anti-Palestinian” even though my comment did not mention Palestine, nor anything else about the State of Israel, or its government.

In Canada, Jewish targets make up the majority of religiously motivated hate crimes. Last May during the Israel-Gaza fighting, hate crimes targeting Jews surged throughout the country. Unfortunately, there is a clear and inextricable link between the increased tensions between Israelis and Palestinians and increased violence towards Jews.

Rejection of the IHRA definition only seeks to normalize the types of comments found on the Journal’s post, and is an open invitation to leave more. It silences the voices and views of the majority of Jews, and attempts to redefine their experiences. This only builds metaphorical walls, and alienates students.

As such, this motion seeks to oversimplify and curtail Jewish voices on campus and enables widespread support of antisemitic notions from the student population. By repudiating the IHRA definition of antisemitism, hundreds of Jewish students on campus are deserted without a valid baseline to voice our concern against targeted hate. Moreover, the small community of Jewish students who keep the Sabbath like me goes from not just being infinitesimal in numbers, but insignificant—our voices unheard, and possibly rendered null. That is just the tip of the iceberg; beneath the surface, the motion spans a significantly larger region of influences. By and large, the outcome is simple: the cultivation and encouragement of an environment that is unwelcoming and potentially hostile toward Jewish students. Queen’s University, an institution that declares that “you belong here” because of its inclusive background, is making select students feel absurdly out of place. I already feel quite uncomfortable describing and sharing my Jewish observances—I only wonder how much more tense this could become now that this motion passed.

It’s no coincidence that this all came in the middle of Passover, one of the major Jewish holidays.

In a space where Jewish students feel overlooked and marginalized, observant students like myself will be reluctant to be upfront and communicate their issues, such as religious accommodations that don’t truly accommodate or fit the needs of the student. While the university will accommodate religious conflicts, Jewish students will hesitate to disclose conflicts that may stem from grounds, opting to leave religion out of the picture entirely.

Lastly, it is important to note that Jews are more than just a religion. Judaism is considered to be an ethnoreligion, not identified just by religious practices, but also ethnically and culturally. Discarding the IHRA definition because of “freedom of speech” is a move that frames antisemitism as merely a religious issue, completely disgregarding the ethnic aspects of Judaism. Anti-Zionist statements with antisemitic implications and nuances are easily discredited by taking this stance.

I yearn to be a part of an environment that prioritizes peace and coexistence over division and hostility; and I find QUFA to be acting entirely contrary to this principle. I encourage QUFA to continue supporting Palestinian freedom, by means which do not harm other students. Uplifting one community should not be at the expense of another. There are other ways to promote freedom causes without prompting harmful consequences of a minority student group on campus.

About the Author
Jacob Samson is a student at Queen's University in Kingston, Ontario.
Related Topics
Related Posts
Comments