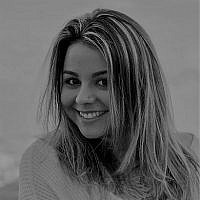 The Blogs
Bianca Seta
Apply for a Blog
Advertisement
Please note that the posts on The Blogs are contributed by third parties. The opinions, facts and any media content in them are presented solely by the authors, and neither The Times of Israel nor its partners assume any responsibility for them. Please contact us in case of abuse. In case of abuse,
Report this post.

There really is no other way to preface this blog post aside from simply saying: get ready. Prepare to be BLOWN. AWAY.

In the past few weeks, I’ve met some of our world’s most influential Jewish leaders. Before meeting these incredible people, I had never previously heard of most of them, which is something that still shocks me today considering the great impact they had, and continue to have, in the Jewish world and honestly the world in general.

For example, Jewish leader and educator Avraham Infeld came and spoke to my program to emphasize how important it is to ensure the continued significant renaissance of the Jewish people. You probably don’t recognize the name, but as the first Jewish day school student in Johannesburg, South Africa at The King David School established by the South African Zionist Federation, the first national director of Birthright Israel, and the previous Hillel International President, Avraham Infeld travels worldwide to help Jews find meaning and joy in their Jewish identities. I walked out of his speech feeling quite inspired and truly empowered.

We had the pleasure of spending the day with Dyonna Ginsburg, the Executive Director of OLAM, a collaborative venture and joint platform for promoting global Jewish service. Donna previously served as the Director of Education and Service Learning at The Jewish Agency and was also very involved in Jewish organizations dedicated to social change and Jewish social justice. Being able to learn about Jewish service with Dyonna, named “One of Israel’s 50 most inspiring women” by Nashim magazine in 2015, was such a growing experience. She brought in a variety of speakers who showed us the various angles of Jewish service and ways in people like us can make an impact.

Additionally, Laura Solomon, founder of her own law firm devoted to the representation of nonprofit, charitable, and other tax-exempt organizations, came and spoke to us about the importance of Jewish Non-Profit work and the role she plays in assisting those organizations. Laura, an outstanding female role model to me, currently serves as a United States delegate to the Financial Action Task Force, is a member of the Charity Working Group of the U.S. Treasury Department and the Tax-Exempt Organizations Subcommittee of the American Bar Association, and much much more. Simply being in the same room as her was amazing, let alone listening to her explain the work she does and how much she assists people and places who need her help and support.

We had a whole weekend retreat dedicated to the different sects of Judaism, starting off with learning from Conservative Rabbi David Golinkin, the President of The Schechter Institutes in Jerusalem, to learning about the dynamics of Jewish law with Rav Shmuel Klitsner, an inspiring Orthodox leader at Midreshet Lindenbaum, a female seminary in Israel. And just to top it off, we also spent time with Rabbi Susan Silverman, a Reform rabbi here in Israel, also the sister of actress and comedian Sarah Silverman! Rabbi Silverman’s work includes activism on behalf of asylum seekers in Israel, advocating for liberal Judaism and promoting adoption as well as serving on the Board of Directors of Women of the Wall. She has dedicated her life to finding ways to incorporate Judaism and Social Justice here in Israel.

The retreat continued with more and more leaders that have devoted their lives to Israel and the Jewish people. Rabbi Michael Melchior joined us one morning; if you don’t know who that is, once again, get ready. Rabbi Melchior is an INTERNATIONALLY renowned Jewish leader. He is an Orthodox rabbi, thinker and activist. Not only did he create his own political party in Israel and serve in the Israeli government (the Knesset) on that political party, Meimad, but he currently still holds the title of the Chief Rabbi of Norway, along with many previous positions within the Foreign Affairs world. Additionally, Rabbi Melchior was the brain behind Birthright Israel, a not-for-profit educational organization that sponsors free 10-day heritage trips to Israel for young adults, ages 18-32, of Jewish heritage. He remains very involved in Israeli politics and still dedicates his time to creating world of peace.

There are so many more influential people that I have met in the past few weeks that have really just left me in awe. Hopefully sharing my experiences of meeting these significant leaders doesn’t bore you after reading paragraphs and paragraphs of names and job descriptions essentially, but rather allows you to process and realize who really is “behind the scenes” of the outstanding movements and organizations that we have in place today.

Don’t worry, there are many more leaders that I have yet to explain and share about!

About the Author
Bianca Seta was born and raised in Los Angeles, California and attended Indiana University Bloomington as a Journalism major, with a specialization in Public Relations, and Spanish minor. She comes from an Argentinian background, speaks four languages, loves to socialize and meet new people, is passionate about her Jewish identity, and absolutely loves Israel. She can’t wait to see where her exciting future takes her!
Comments