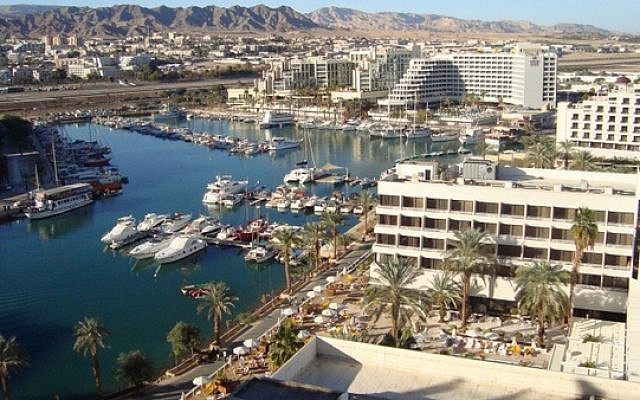 Eilat - an Innocent View from Above (A Public domain picture from All-free-download.com)

President Reuven Rivlin, in a Facebook post addressing young Israelis, said, “I write to you even though I no longer have words in the face of the horror that was reported in the gang rape in Eilat.”

Prime Minister Netanyahu was quick to join in “Rape of 16-year-old by 30 men is crime against humanity” was his contribution.

Both men should have known that in Israel we have the Right to Due Process of Law – better known as Innocent Until Proven Guilty. It is the job of the courts to determine if a crime has taken place and, if so, who should be held responsible.

The original story is already undergoing major changes. The police have said that fewer people were involved than previously thought. From both eyewitnesses and camera footage from the hotel and surrounding streets, there is no indication that 30 or so men were involved.

In 1975, an 11-year-old British girl, Lesley Molseed, was sexually assaulted and murdered. Stefan Kiszko, an intellectually challenged young man who lived nearby, was wrongly convicted, and served 16 years in prison before his conviction was overturned. Evidence that Kiszko could not have committed the crime had been withheld by three members of the investigation team. The real culprit, Ronald Castree, was found in 2006 with a DNA match leading to his arrest and conviction.

We should remember the case of Liam Allan. In 2017, Allan, a 22-year old student was accused of no less than six counts of rape. In 2019 he was cleared by a judge after it emerged that his accuser had sent her friends hundreds of messages detailing her secret rape fantasies.

Rape cases are never easy. Take the case of James Hanratty, the A6 Murderer. Hanratty was a British criminal convicted of the murder of Michael Gregsten, a scientist, who was shot dead in a car on the A6 in 1961. Gregsten’s lover, Valerie Storie, was raped and shot five times. She lived but was left paralysed. According to Storie, they were taken at gunpoint in their car by a man with a Cockney accent and mannerisms matching Hanratty’s. The police came up with two suspects Hanratty, a petty criminal, and Peter Louis Alphon, an eccentric drifter. In police line-ups, Storie eventually identified Hanratty.

Storie’s evidence was crucial in securing a guilty verdict. However, many people felt that the supporting evidence was too weak to justify a conviction. For decades, Hanratty’s brother fought a legal battle to have the verdict overturned, although Hanratty had been hanged at Bedford Gaol in 1962. He had the distinction of being one of the last people to be executed before capital punishment in the UK was abolished.In 1997, after three Home Office inquiries, the police concluded that he had been wrongfully convicted. However, in a last twist, in 2001 after more legal wrangling, James Hanratty’s body was exhumed in to extract his DNA. Comparison with DNA from the handkerchief in which the murder weapon had been wrapped, and with DNA in the underwear that Storie was wearing when she was raped, showed an exact match to James Hanratty’s DNA. In 2002 some 40 years after the horrendous crime was committed, the Court of Appeal ruled that Hanratty’s guilt had been conclusively proved, beyond any doubt.

In 1986, Michael Shirley, a seaman in the Royal Navy, was found guilty of the rape and murder of a 24-year-old barmaid. After serving the minimum 15 years of a life sentence he refused parole as this would have meant admitting guilt. In 2002, fresh DNA evidence brought to the Court of Appeal resulted in his conviction being quashed.

And only last year, at the Ayia Napa holiday resort in Cyprus, a group of Israeli men were accused of gang raping a British woman. The British tourist was subsequently found guilty of lying about the alleged attack.

We do not yet know the full story of what happened in Eilat. But we should let the police and the courts do their job before we rush to conclusions.