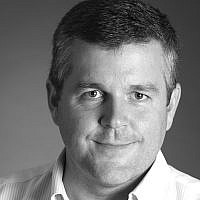 The Blogs
Ignacio Pena
Apply for a Blog
Please note that the posts on The Blogs are contributed by third parties. The opinions, facts and any media content in them are presented solely by the authors, and neither The Times of Israel nor its partners assume any responsibility for them. Please contact us in case of abuse. In case of abuse,
Report this post. Against all odds, Israel was created to provide a safe place in the world for the Jewish people. That goal is largely accomplished. Why not take your achievements to the next level? The Startup Nation is now in a position to transform the whole world into a better and safer place for itself and for everyone else by innovating for peace and inclusion.

The Startup Nation changed my perception of Israel. Visiting from Argentina, I was struck by your amazing accomplishments, but even more so by the character of the people I met: daring, truth-loving, intelligent, entrepreneurial, hard-working, deeply patriotic and friendly. Today I understand and treasure the contribution of my Jewish family roots to who I am. I am also convinced that israelis are natural friends of Latin America. Other people are also increasingly looking at your country in a new light.

Israel is already leveraging the appeal of the Startup Nation to address domestic and international challenges. Know-how and insights are being generously shared to build bridges with other countries. Universities and venture capital firms are creating special initiatives to bring onboard the arab population. Strategic bets are being made to address global challenges such as the need for renewable energy. Agricultural technology is being shared with African countries for humanitarian purposes. But you could challenge yourselves to go further and make the Startup Nation become the basis for the Inclusion Nation.

Israel could innovate for social impact by developing extremely affordable basic necessity products and services to serve the most vulnerable people across the world. Recent examples show that new technologies provide with the tools to develop products that are 10 to 100 times cheaper than those in the market today.

One year ago China 3D-printed five houses in 24 hours at a cost lower than US$5,000 per house. A group of Stanford students developed an infant warmer called Embrace that substitutes incubators costing a hundred times more and is deploying it in India and around the world. Meanwhile scientists at the Advanced Innovation Center in Chile created a plasma lamp that purifies water eliminating bacteria, viruses and germs at cost near 0.001 US$ per liter. An Indian entrepreneur designed a microscope that costs less than 50 US cents and folds like origami for disease detection. Google and Facebook are planning to provide Internet access in emerging countries using solar-powered drones. What could the Startup Nation not achieve if it made a strategic bet on extreme affordability?

The world desperately needs this kind of innovation. In its most recent Global Risk Report, the World Economic Forum reached the conclusion that inequality is the most clear threat to global stability. Billions of people don’t have access to minimum quality drinking water, food, housing, energy, education and health. Ubiquitous computing, advanced robotics and artificial intelligence will displace millions of people from their jobs, compounding the challenges of existing unemployment. Climate change and rising oil and food prices are a threat to world’s poor. Global debt levels hinder our capacity for growth and job creation.

Peace and stability call for new ways of addressing the needs of the most vulnerable. Unless we act, rising unemployment, inequality and frustration are bound to breed populism, extremism and even geopolitical conflict.

Israel is in a privileged position to address these issues. It has world-class entrepreneurial innovation capabilities, powerful global networks and an unequaled preparation to face formidable challenges.

There is a clear strategic rationale for Israel to innovate for inclusion. It will help address inequality issues at home, open up huge markets and create goodwill and admiration among common people across the world. Imagine the impact of having dozens of stories such as the Grameen Bank and Kahn Academy coming out of Israel.

Israel could boost inclusive innovation in a number of ways. The government could launch a project similar to the Israel National Nanotechnology Initiative or even an entity such as DARPA, but focused on creating radical solutions for the bottom of the pyramid. Universities could create programs such as the Stanford project-based course on design for extreme affordability. Companies could sponsor incentive prizes such as the Qualcomm Tricorder X-Prize, which offers US$10M to stimulate the development of wireless handheld devices capable of monitoring and diagnosing a set of 15 diseases independent of a healthcare professional or facility. Israel could also engage other nations, for example in Latin America, creating the basis for a transformative global network of technology innovation for social impact.

In the Art of War, Sun Tzu, the renowned ancient general and strategist, said that “the greatest victory is that which requires no battle”. Israel could apply use this maxim to everyone’s advantage by innovating for peace and inclusion. In the process it could give a totally new historical meaning to the notion of the chosen people by showing the path towards a world of abundance, inclusion and regeneration.

About the Author
Ignacio Pena is a strategist, an innovation activist and an angel investor focused on promoting the development of the innovation and global entrepreneurship ecosystem in Latin America through a number of initiatives. Previously he was Partner and Managing Director at the Boston Consulting Group based in Brazil and executed over 100 projects in a wide spectrum of sectors in the region for large corporations, governments, NGOs and industry associations.
Related Topics
Related Posts
Comments