The teachers liked my idea so I arranged two projects. The first was for Moshe’s class, a group of 32 sixth graders. We visited the Beit Frankforter senior center, just a block away from the Efrata school in Baka. The students came in costumes and brought treats for the seniors, they sang and danced and played a Purim trivia bingo game together. The students learned that six of the seniors in the room actually come from the city of Shushan, where the story of the megilla takes place.

The second project was for Yehuda’s class, a group of 36 third graders. The teacher asked the students to bring in snacks, coffee and tea so that we could prepare gift baskets together for the soldiers. As well, each student prepared a card that we attached to one of the baskets. 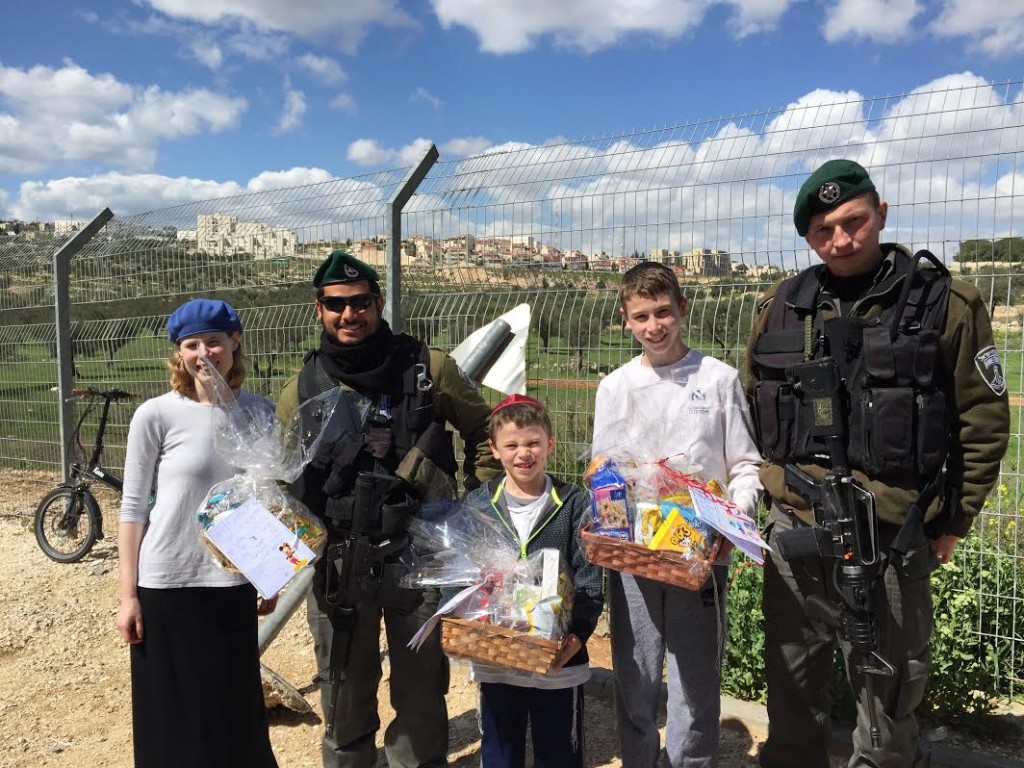 There were a few children who forgot to bring something but the teacher told them not to worry, that the baskets were a collective gift from the entire class. I told them that by helping us pack and by making the card they were also giving of themselves.

What does all of this have to do with Parshat Vayakhel?

In Parshat Vayakhel, Moshe asked the congregation of Israel to bring a Trumah offering (contribution) for the Mishkan (Tabernacle). Those with a wise or generous heart were extremely generous with their contributions. In fact, so much was brought that in Shmot 36:4-7 we read: “All the wise men came, who were executing all the holy tasks, each and every man from the task in which he was engaged. They said the following to Moshe: ‘the people are bringing too much, more than which is needed for the tasks that God has commanded to execute.’ Moshe commanded, and they proclaimed throughout the encampment saying, ‘Let no man or woman bring any more material for the sacred offering.’ And the people stopped bringing. The material was enough for all of the work that had to be done and some was left over.”

May we be so lucky to have such as outpouring of love and support in our times!

May the students who are being introduced to Tzedaka and chesed at such a young age continue to contribute as they grow.

One of the third graders asked if the students brought too many food contributions for the soldiers. I told them that unlike in the parsha where the people were told to stop giving as enough had been contributed, our soldiers can never get enough snacks, coffee and love.