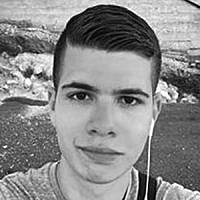 The Blogs
Joe Sigolo
Apply for a Blog
Please note that the posts on The Blogs are contributed by third parties. The opinions, facts and any media content in them are presented solely by the authors, and neither The Times of Israel nor its partners assume any responsibility for them. Please contact us in case of abuse. In case of abuse,
Report this post.

Ambassador Mark Regev’s presence at SOAS (The School of Oriental and African Studies) last week sparked huge controversy after the Palestinian society and various Academics called for the event to be called off and for the boycott of Israel. Once again we have witnessed anti-Israel activists refuse to embrace a dialogue of peace and co-existence; instead opting to stifle free speech and productive debate.

All over the quad I could see banners with ‘Decolonise SOAS’ and ‘Apartheid off campus’, Hezbollah flags and Hats. As well as crowds of students chanting ‘From the River to the Sea Palestine Will Be Free’ calling for the destruction of Israel. Protestors were aggressively smearing red paint on Israeli flags, barging into people and were very hostile to anyone with differing opinions. The atmosphere that I had to endure that day made me feel helpless, amid hundreds of protestors accusing my very own presence there as provocative.

However, one of the most disturbing encounter I had that day, was when I heard a man shouting ‘Jewish scum out of Palestine!’. When I approached him, he began to speak about the Holocaust and Hitler and said that ‘6 Million Jews were slaughtered because they were cowards’. As I confronted him on this, he began to put up the symbol for the number six with his hands to my face, mocking me, laughing whilst repeating the phrase ‘You’re cowards, they were led to slaughter like lambs, because they were cowards’.

I felt sick, Outraged and deeply distressed at how someone could be so ignorant. Never have I seen anti-Semitism so open and casually being displayed like this before. I was waiting and hoping for the authorities or one of the event coordinators to get involved and tell this man to stop. Instead, I was pushed away by a protestor who told the man ‘Not to interact with Zionists’. It was completely unprovoked; I just couldn’t believe it. This man was simply there to spew his Jew hatred unopposed.

As I walked along the quad in fear, I could only begin to imagine what horrible experience it would be like to be an Israeli or Jewish student studying there. The pain they would go through having listened to hundreds of students chanting for the destruction of your country and rejecting the legitimacy of your country’s existence, hearing protestors maliciously denying your heritage and history with no one doing anything about it. As I looked around I saw that many of the Jewish students there felt humiliated and helpless.

As I continued walking, I was handed a leaflet by a protestor instructing those there ‘not to interact with Zionists’. This made me feel completely isolated. I still remember the stares of disgust that I received that day, from people I didn’t even know, accusing me of supporting apartheid and genocide, all because I was willing to question some of the lies being spread about Israel. It was at that very moment that I finally understood the hate that Jewish students have been absorbing all these years.

As a student interested in Israel, my curiosity of the subject is constantly being persecuted, events that invite Israeli speakers are constantly pressured to be shut down and when they do get permission, are violently protested. This hostility towards Israel results in intense security and events often having to be taken place in smaller venues, consequently many students are not able to go due to low capacity, as was the case for me at SOAS. When I tried to engage with protestors after not being able to get into the event, which is due to the protests, I was subjected to anti-Semitic abuse.

The very place that is supposed to be a beacon for freedom of speech and where different ideas are discussed and debated in a respectful manner is now one that calls for censorship and intimidates those with differing opinions. The mere fact that Israel events are met with such backlash exemplifies the hostile atmosphere on campus. We’re met with opposition every time, whilst extremists are invited to speak, even those who implicitly incite hatred are given a platform and there’s no outrage, no protests, no calls for it to be shut down, whilst an official who comes to start dialogue and open up a respectful debate is met with this level of hostility.

Any support we get comes largely from Pro-Israel organisations however; this should be the Student Union’s job. Unfortunately, it seems to be that safe spaces are open to everyone, unless you’re Jewish.