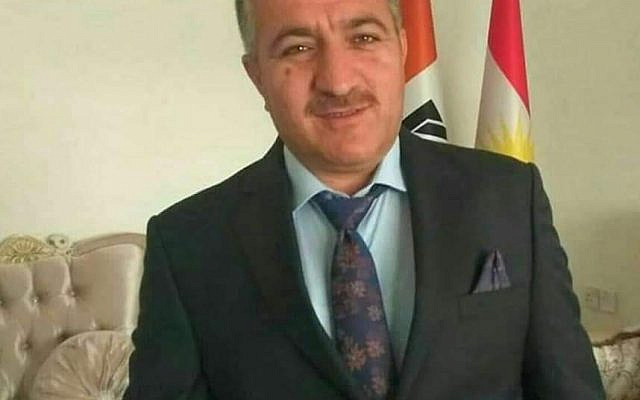 As Iran is seeking to gain more control over Kurdistan Region of Iraq, maybe even occupy- Kurdish intellectuals and politicians are calling on Kurdish unification.

The publication of an open letter signed by a number of personalities organized by Mr. Jaafar Tikantape to hold a general meeting between the political parties of eastern Kurdistan, was welcomed by the Kurdistan Freedom Party, in a official response to the letter, Kurdistans Freedom Party said; Another call signed by dozens of activists in different fields “for the unity and solidarity of political parties and organizations in eastern Kurdistan” has reached us. The call proposes some good principles and steps for cooperation and unity.

The Kurdistan Freedom Party (PAK) welcomes the call and its contents and considers it a responsible and sincere attempt to fill a huge gap in the political movement in eastern Kurdistan. 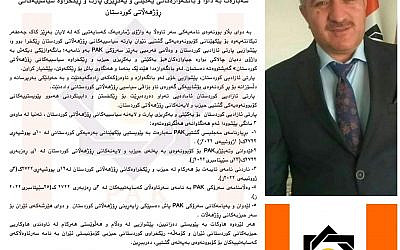 In a statement released by Khalil Nadri the Spokesperson of the Kurdistan Freedom Party (PAK) October 10, 2022, the leading Kurdish party in Iran- Pak expresses its full readiness to help organize a general meeting between all Kurdish parties in eastern Kurdistan. Mr Nadri clarified that in the last three months PAK have taken the following steps to unite the Kurdish political parties in Iran- eastern Kurdistan:

1- Resolution of the PAK General Assembly on the need to form a unified Kurdistan- Kurdish Front on 10 April 2722 AH (1 July 2022 ) against the Iranian regime
2- Statement of the PAK spokesman for the emergency meeting of the parties in East Kurdistan on September 1, 2722 AH (September 23, 2022 ).
3- Sending a special letter to each of the parties and organizations of East Kurdistan on 12 April 2722 AH (3 July 2022 ).
4- Response of the PAK President to the open letter of the personalities on September 3, 2722 (September 25, 2022 ).
5- Statements and messages from Hussein Yazdapanah after the beginning of the uprising in eastern Kurdistan and after the Iranian attack Kurdish Peshmerga forces bases in Kurdistan Region of Iraq. 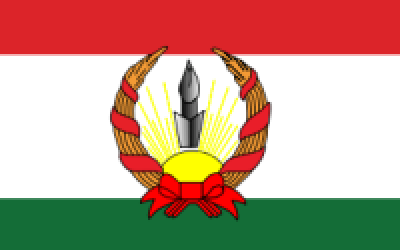 The flag of the Republic of Kurdistan 1946, the republic was not only extended to the city of Mahabad but to a large area in the north of Eastern Kurdistan. (courtesy of PAK)

Qazi Muhammad pointed out: “The success of any people is caused by, unity and support of their whole nation, any nation that does not have unity will forever be under its enemies’ rule.”

It was the Kurdish Peshmerga that destroyed the myth of ISIS being an invincible fighting force, already in 2014, and became famous worldwide for their heroism. But it also showed the weakness of the Peshmerga forces, the lack of unity. The lack of unity between PUK and KDP Peshmerga resulted in the deaths of at least 11 Peshmerga soldiers. They didn’t have to die, if the Peshmerga wasn’t so disorganized and disconnected from each other. The lack of unification between Peshmerga forces, the lack of a national Kurdish army creates a lot of problems, and it’s probably the Kurds biggest weakness and obstacle for a future autonomous Kurdistan.

The Peshmerga “those who face death” are the Kurdish fighting forces. Many regard them as one of the most effective ground forces in modern history, and the most effective force in the fight against ISIS. For natural reasons – it’s not hard to imagine that they can become unstoppable if they have a unified front.

In the Kurdish documentary “No friends but the mountains” by prominent filmmaker Kae Bahar, in 2017, General Yazdapana from the Kurdistans Freedom Party said something very interesting: “The Kurdish unity is flawed. Kurdish unity exists at grassroots level but not at the top. The Kurdish leaders are not yet politically united to liberate Kurdistan. There is no agreement on how to move forward and unite all the Kurds. These divisions are caused by political leaders. Political allegiances are as destructive as the enemies who want to keep us divided.”

This is the same problem and opportunities immortal Kurdish leader Qazi Mohammad pointed out in his last speech: “The success of any people is caused by unity and support of their whole nation, any nation that does not have unity will forever be under its enemies’ rule.”

So what’s the Peshmerga’s biggest strength?

Their fighting spirit, popular support, reliability, mass, and a unique intelligence network. For the west the Peshmerga reforms are about creating an accountable, capable and affordable regional force operating as an effective element of the Iraqi Security Forces, for a more secure and stable Kurdistan Region within Iraq.
That should not be the Kurdistan regional government objective. The objective of the Kurdistan Region Government should be to use the Peshmerga reforms as a cornerstone to build a future independent Kurdish state. Security, safety, and stability are the cornerstones of a sovereign nation state. The Peshmerga forces from eastern Kurdistan should take the lead, and already now unify against the Iranian regime.

If we look at the history of Israel, we quickly see how strong one can become through a united national army, even when one is threatened. Even when the nation is newly formed. Israel’s army was built by various militias joining forces. Kurdistan is different but still in a fairly similar situation as Israel in the late 40s.

Kurdistan is historically a tribal society, and historically the Peshmerga have also been loyal to different tribes, the local community, or political parties. In connection with the democratic development in the Kurdistan Region, there will be a lot of challenges, such as the Peshmerga becoming one national army, which will also create enormous opportunities for the future Kurdish independent state.
Whatever the future has to bring, one thing is a curtain: The increasing importance of Kurds and Kurdistan for the future of the Middle East as international politics. That is in the Kurds from eastern Kurdistan favor!

Parti Azadi Kurdistan, known as PAK was established by a group of Kurdish freedom fighters under the leadership of Mr. Saied Yazdanpana on 20th of May 1991. Soon after the party was established, on the 9th of September 1991 he was assassinated by Iranian agents in the city of Suleymaniyeh in Bashur, Iraqi Kurdistan.

In 2006 the first congress of the party was held in the city of Hewler (eng. Erbil). The congress elected Mr. Ali Qazi, the son of the first Kurdish president in history (internationally known as the Republic of Mahabad), and Mr Hussein Yazdanpana as the vice president of the party. In addition to these changes they also formed their own Peshmerga forces.

It’s not easy to form a political party in Iran, in the beginning up to 20 members of the party were assassinated by Iranian backed assassins and “security” forces. Many have been executed in Iranian prisons.

PAK regards itself as a national liberation freedom party. PAK Peshmerga is fighting for achieving national sovereignty and security for all Kurds. PAK Peshmerga have been involved in the Iraqi Civil War, fighting the Islamic State of Iraq and the Levant (ISIL) along with other Kurdish forces.