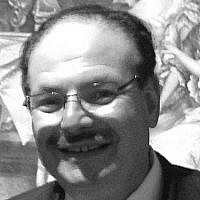 The Blogs
Steve Shalot
Health & Medical Correspondent for ISRAEL DAILY NEWS PODCAST
Apply for a Blog
Advertisement
Please note that the posts on The Blogs are contributed by third parties. The opinions, facts and any media content in them are presented solely by the authors, and neither The Times of Israel nor its partners assume any responsibility for them. Please contact us in case of abuse. In case of abuse,
Report this post.

“Auschwitz was built not with stones, but words.”
Abraham Joshua Heschel

“ The issue with most rogue states like Iran, like North Korea, is that by talking to them you are giving them legitimacy and you’re also giving them time which proliferators need.” (Quote by Fmr US Ambassador to the UN, John Bolton, on FOX NEWS re: Negotiating with an “Outlaw State”)

At this writing, the Iranian nuclear deal is being hotly debated across the United States; in all types of media, in the Congress and the Senate. To be fair, the proponents of President Obama’s Deal, ask the question: “If not for this deal . . . then what alternative is there — war?” The idea is that the freeing of Iranian assets will stimulate the Iranian economy, turn the country’s attention to peaceful pursuits, and in ten years, when the deal expires, wanting a bomb will be the last thing the Iranians will think of. Also, the safeguards against cheating, the random inspections of underground facilities, and the “snapback” clause with respect to the economic sanctions, all serve to guarantee a peaceful Iran and a peaceful Middle East. These “pro” arguments do not take into account the nature of the Iranian government, its past performance, its present role on the World stage, and its future aspirations.

They certainly do not take into account the core values of the Iranian leadership which believes that a nuclear Armageddon will hasten the coming of “The Twelfth Imam,” the destruction of the enemies of Islam, and the establishment of a Shia Caliphate in the World at large. This is more than innocuous political posturing – it is FACT, based on their twisted ideology and world view. Few leaders take these things seriously.

To understand the gist of the objections to the Iranian Nuclear Deal, we need to consider why Iran is considered a rogue state, and why appeasing such a state is dangerous. As we now know, the Deal includes relief of international sanctions freeing $150 billion in frozen assets, allows Iran to keep operating centrifuges, keep a supply of enriched Uranium, and allows for 24-hour notice of inspections of underground nuclear facilities ( that we know of).

Secretary Of State John Kerry, as well as President Obama handled criticism of Iran’s other objectionable activities by saying only that they had no place at these negotiations, which were aimed solely at halting Iran’s progress to nuclear power status. Among these activities are the funding of international terrorism, Holocaust denial as official government policy, the holding of 4, possibly 5 American hostages under unspeakable conditions of brutality and neglect, (which includes, in the case of former US Marine Sergeant Amir Hekmati, forcefully injecting him with Heroin, thus turning him into an addict, and then torturing him by denying him the drug and bringing on withdrawal) and a state execution rate (which includes children), second only to Communist China.

Yet there is another activity, which has not received as much coverage in the mainstream media as it should; is most vile and insidious, and went largely ignored by the UN (no surprise there), and the six Allied partners at the nuclear bargaining table in Vienna. I’m talking about the frequent calls by Iranian leaders past and present, including, most notably, the former Iranian President Mahmoud Ahmadinejad, for the annihilation of the State Of Israel, and the entire Jewish world population. He and the ruling mullahs, most notably the Supreme Leader, Ayatollah Khameni, have openly described Israel and World Jewry as “a cancer in the world, that needs to be eliminated.” Even more ominous are the statements by the Ayatollah that Israel is a “One-Bomb State,” whereas the Islamic Republic of Iran could absorb multiple such nuclear attacks, and still survive!

This is not free speech protected by the laws of any civilized nation, nor is it innocuous chatter; or as President Obama blithely dismissed it as “political posturing,” to be looked at in the same vein as the organized “Death To America, Death To Israel” rallies in Tehran. It is called Incitement To Genocide, and is considered to be a war crime by the International Criminal Court (ICC). Since the Nuremberg Trials in 1946, 22 cases in 9 situations have been brought before the ICC for consideration.

In the spring of 1994, more than half a million Rwandan Tutsis, more than 70% of Rwanda’s Tutsi population, were massacred in the worst incident of genocide since the Holocaust. The world did little to stop it. Then, in 2003, 3 men were convicted by the ICC for involvement and leadership of the Rwandan slaughter. The 3 were not generals, militia commanders, or politicians, but media executives. Through their respective outlets, they encouraged and exhorted the Hutu population to commit murder on a mass scale; even going so far as to broadcast and print locations of where the perpetrators could find the largest numbers of victims, which sadly, included women and young children. They were convicted of “incitement to genocide, crimes against humanity, and conspiracy to commit genocide.”

These men carried neither machetes nor guns, but the court judged them guilty as if they themselves had carried out the butchering. If the same standards were applied equally and fairly to the Iranian leadership of at least the last 10 or 15 years, then men the likes of Mahmoud Ahmadinejad and the Grand Ayatollah Khameni would be serving long prison terms. These are the people the President of The United States is exhorting Congress to approve a deal with. Instead of figuring out how to release $150 billion in frozen assets, they should be figuring out the location of a maximum security prison to hold these criminals, and any negotiations to be held would concern visitation rights!

The brutal nature of the Iranian regime was out in the open for the World to see in 2009 just after Mr. Ahmadinejad “won” re-election to a second term as president. Allegations of fraud and election tampering were made, and thousands of demonstrators took to the streets, mostly young people — many of them college students who were the same age now, as the leaders of the present Iranian government were at the time of the Revolution in 1978-79. They were arrested en masse, brutally beaten and tortured, and many were never seen or heard from again. Where was America? Where was the West?

Enter the Obama Doctrine, the term coined by NY Times Op-Ed columnist Thomas Friedman in an editorial from April 5, 2015. The Doctrine, explains Friedman, takes form from President Obama’s core belief that exclusions, sanctions, and isolation tactics such as the freezing of assets and trade embargoes, has never worked on “problem states” such as Burma, Cuba, and now Iran. There should, instead, be a policy of “engagement” combined with meeting core strategic needs to serve American policy better. American power and self-confidence, is the deterrent which allows the United States the room to engage in wide-ranging diplomatic initiatives.

This is the heart of the Obama Doctrine — In the words of President Obama from the Friedman interview: “We will engage, but we preserve all our capabilities.” He gave the example of Cuba. For years a troublesome country, but never a direct military threat to the United States (after the Cuban Missile Crisis, that is).

“It’s a tiny little country. It’s not one that threatens our core security interests, and so [there’s no reason not] to test the proposition. And if it turns out that it doesn’t lead to better outcomes, we can adjust our policies.” The President also gave a similar logic for pursuing the negotiations with Iran: True, they have sponsored terrorism and killed innocent Americans, but their defense budget is $30 billion compared to $600 billion for us – so why should we worry?

This is all very well and good from the American perspective, but in the case of Iran, it does not address Israel’s concerns. Enter Bibi. Israeli PM Netanyahu came to Washington in March, ostensibly to “blow the Shofar” on behalf of ALL the Jewish people. The nuclear issues aside; unfreezing $150 billion in Iranian assets will only serve to strengthen Hezbollah and Hamas, on Israel’s northern and Gazan borders respectively. We have seen recently how conflicts with these Iranian proxies can become serious fights with far-ranging consequences for Israel.

No matter how sympathetic President Obama may say he is to Israel’s situation, he doesn’t have to live in Tel Aviv, or in Haifa, within missile range of Hezbollah. His children do not have 2 minutes to get to a shelter, nor do they run the risk of NO WARNING, as in the case of a mortar shell from Hamas. Last summer I was in Israel, and I wrote here about my experiences under missile bombardment in Tel Aviv from Iranian missiles fired from Gaza. We experienced a mortar attack from Lebanon at Kfar Giladi as well.

The US doesn’t have to ever feel this kind of pressure.

The negotiations could have been a lot tougher; more “Reganesque” if you will. All centrifuges should have been dismantled, along with getting rid of ALL fissile material. Tied in with this, Iran should be prevented from acquiring ICBM’s. Israel needs more than American assurances, more than an empty Obama Doctrine which holds no benefit for it, and is based on theory. Iran claims it wants nuclear energy for peaceful means and research. Why does a country, sitting on top of the fourth largest oil reserves in the world, estimated at approximately 150 billion barrels, need nuclear energy?

The fact is, that based on his foreign policy record, Syria and Crimea as an example, Israel cannot rely on President Obama’s words. Combine this with the drastic downsizing of the American Armed Forces to the lowest levels since the start of WWII.  As in the past, the Jewish State will have to defend itself. Short of direct military action, there are “things” Israel can do, to slow or stop Iran’s march to the bomb. If the lights are not burning late into the night in Mossad headquarters or the Defense Ministry, I would be very much surprised indeed. The next few months are crucial.

About the Author
Dr. Steven Shalot, DPM is a journalist and editor for Independent authors. He is the health and medical correspondent for the “ISRAEL DAILY NEWS PODCAST” with Shanna Fuld. An independent freelance writer and book editor for Jewish publications, he is also the former senior editor of "Podiatry Management Magazine," Kane Comm. He is passionately devoted to Israel, the Conservative movement, and Jewish life, history & spirituality . . . and writes about whatever comes to mind!
Related Topics
Related Posts
Comments