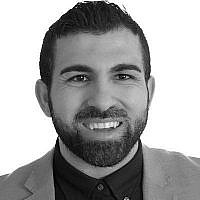 The Blogs
Halmat Palani
Apply for a Blog
Advertisement
Please note that the posts on The Blogs are contributed by third parties. The opinions, facts and any media content in them are presented solely by the authors, and neither The Times of Israel nor its partners assume any responsibility for them. Please contact us in case of abuse. In case of abuse,
Report this post. 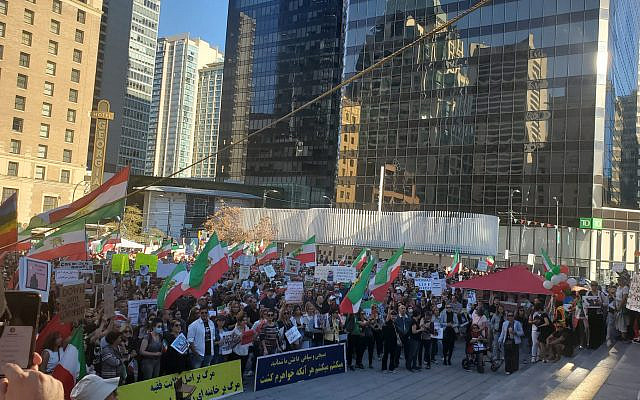 October 15, 2022 Protesters in Vancouver, Canada gather for consecutive weeks in the thousands to show solidarity with protestors in Iran following the death of Kurdish girl, Jina (Mahsa) Aimini. (Image courtesy of author)

A 2022 report published by Freedom House titled “The Global Expansion of Authoritarian Rule” warns that global freedoms face a dire threat. Democracy defenders are losing to authoritarian foes and the global order is tipping in favor of tyranny, the report finds. The report also mentions that the present threat to democracy is the product of 16 consecutive years of decline in global freedom. The democracy movement in Iran must be viewed with these facts in mind and supported as another battlefield in the democratic tide confronting growing tyranny and authoritarianism.

The death of 22-year-old Kurdish girl Jina (Mahsa) Amini in Iran, has led Iranians to rise in protest against the Islamic Republic of Iran with cries of “Jin, Jian, Azadi” (Women, Life, Freedom) and “death to the dictator”.

Amnesty International and the Center for Human Rights in Iran warn of a massacre happening in the besieged and militarized Kurdish city of Sanandaj. Anti-riot police are using lethal force and shooting at civilian protesters indiscriminately in Kurdish and Baloch dominated cities. Thus far, the protest has resulted in over 9326 individuals arrested, and 243 have been killed, 32 of whom were children, according to the human rights organization HARNA. Despite the increasing number of deaths and casualties, the protests are intensifying across cities in Iran, especially in the Kurdistan and Baluchistan regions.

This is not the first time that Iranians have poured into the streets to call for change from a government whose only response has been bullets, murder, mass arrests and imprisonment. However, this time around everyone including school children under 10 are chanting for freedom. There is, thus, a unity in voice and demand from all demographics of the Iranian population that makes current protests fundamentally different than those witnessed in the past.

The unprecedented global solidarity across Western capitals suggests that this revolution is taking place not just inside but also outside of Iran. Thousands of people have been flooding the streets in cities across Canada, The United States, and Europe in support of the protests across Iran.

While Canada has slapped new sanctions against the regime, particularly against 50% of the IRGC’s upper-ranking officials, other western countries have offered either half-baked measures or mere words of condemnation.

Protesters are being arrested, beaten and shot at in Iran. Nevertheless, the Biden administration and its European allies still cling to the hope of negotiating a nuclear deal with the Iranian regime: a regime that has imprisoned thousands and executed thousands more since its inception. It has threatened and assassinated dissidents, journalists and activists not just in Iran and the Middle East but also on the European and American continents.

The United States and its allies in Europe have not been willing to stand up to the Regime on its record of gross human rights violations even though unrest, imprisonment, execution and assassination of opponents continue.

Granted, the West has a lot on its plate given the rise of inflation, an energy crisis due to Russia’s war with Ukraine and the Cold War with NATO. Nevertheless, there is no valid reason to ignore events in Iran and the movement forming there for an end to the Islamic Regime.

The West is representative of the democratic world and has an obligation to deter the rising power of authoritarianism at home and abroad because this is the best way to safeguard the liberties and democracy that are so deeply cherished and that so many died for in World War II.

The rising demand in Iran for an end to the theocratic state of the Shia Mullahs calls into question the West’s efforts to negotiate a nuclear deal with the Islamic Republic of Iran. The West’s lack of focus on the human rights crimes committed by the Islamic Republic undermines efforts to safeguard human rights and democracy in the country. Such disregard for human rights violations has emboldened authoritarian powers like Iran, China and Russia to act with impunity and defiance against democratic voices both on the domestic and international stage.

What Biden and the Europeans are most likely hoping for is a deal with the Regime that could give them access to Iran’s oil to counterbalance the gas and oil that Russia is refusing to provide Europe. This is, however, a very naive and dangerous course of action if undertaken.

The Iranian Regime is deeply involved in the affairs of Iraq, Syria, Lebanon, Yemen and Palestine. The IRGC recently fired missiles and conducted drone attacks across the border in Iraq to target Kurdish opposition forces without any regard for Iraqi sovereignty or the lives lost in that attack. Furthermore, the Regime in cooperation with Russia has been involved in Syria for over a decade. There are even recent reports of Iranian drones being used by Russia in its war with Ukraine.

The Regime is not a power that the West should negotiate with or appease because Ukrainian officials have stated that Iran is aiding Putin and undermining effort to pressure Putin to end the invasion of Ukraine and negotiate a peaceful resolution to the conflict. Supporting the decades-old democratic movement in Iran that current protests are a manifestation of can significantly tip the balance in favor of democratic forces in Iran and the Middle East.

The democratic world is witnessing threats from authoritarian powers across the globe. The West needs to see confronting the Islamic Regime as part of a broader conflict between the free world and an authoritarian one run by governments like Iran, Russia, Syria, North Korea and China.

The collapse of the Islamic Regime in Iran and the prospects of a federal and democratic Iran could, as stated by Karim Sadjadpour, a senior fellow at the Carnegie Endowment for International Peace, be an event as significant geopolitically as the fall of the Soviet Union. A democratic Iran, thus, may alter the geopolitical reality globally by weakening Bashar Al-Assad in Syria and Putin in Russia: two autocratic allies of Iran that are dramatically destabilizing Mideast and European security.

Ending negotiations with the Islamic Republic of Iran, further investing in measures to choke its finances abroad and building an international coalition that could hold it accountable for human rights violations will significantly aid the protesters and curtail the tide of authoritarianism sweeping the globe.

About the Author
Halmat Palani is a Kurdish rights activist, English teacher and freelance writer out of Vancouver, Canada whose writings cover the Kurdish question, Middle East Politics and US foreign policy. He has written for Jerusalem Post, Kurdistan24, Rudaw, BasNews and other news organizations.
Related Topics
Related Posts