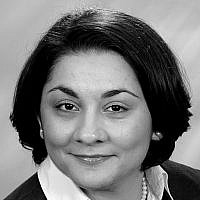 To describe Mohsen Makhmalbaf’s recent trip to Israel as significant is an understatement. It is truly historic on many levels. The Iranian film director’s personal journey from Islamist to outspoken opponent of Iran’s Islamist regime is remarkable and amplifies the changes Iran’s civil society has undergone. The gravity of all those changes is embodied in Makhmalbaf’s recent film, which breaks with two taboos at the same time.

The Gardener is a film shot in the Holy Land and a film that captures the Bahai faith in a narrative between a father and a son. Presenting his film at the Jerusalem Film Festival was a unique opportunity for Makhmalbaf to foster a dialolgue between Iranians and Israelis and a ray of light in the darkness that prevails today in the Islamic Republic. Makhmalbaf’s message in Jerusalem was therefore one of hope, in which he said that love was the way out of this conflict. “You love us and we love you.”

Mohsen Makhmalbaf has come a long way from being the kid from a poor southern Teheran neighborhood who joined a militant Islamist group to clandestinely fight the Shah’s regime to sharing profound thoughts of friendship with the Jewish people in the Jewish democratic state. He deserves praise for this courage. But instead what Mohsen Makhmalbaf got upon his return was an attack. A group of Iranians – a mélange of extreme rightwing activists, leftist intellectuals and Islamists, all united around their hatred toward the Jewish state – harshly criticized him in an open letter about his journey to Israel.

In their letter they asked Makhmalbaf to obey what they call “the International call for Boycott, Divestment, and Sanctions (BDS) of the State of Israel issued by Palestinian civil society in 2005, as well as the specific call for Academic and Cultural Boycott of Israel issued in July 2004.” They call Israel an apartheid state, condemn “Israeli oppression” and accuse the Jewish nation of “ethnic cleansing.” The signatories declare that performing in Israel is a political statement and they continue, “We cannot in good conscience stand by Mr. Makhmalbaf and his decision, which will inevitably validate the Israeli occupation, apartheid and ethnic cleansing. We ask not only that Mr. Makhmalbaf stand with the Boycott, Divestment, and Sanctions Movement, but that he be a messenger of liberation for everyone, including both Palestinians and Iranians.”

But who are these Iranians so fond of human rights and passionate supporters of sanctions against Israel as a Jewish state? Ironically most of them oppose sanctions against another regime. Which one? Take a guess. Yes, you are right: Islamic Republic of Iran. A regime on its way to a nuclear bomb while its leaders, including the current Supreme Leader and President have frequently threatened to destroy Israel and wipe it off the map. The same regime that has killed thousands of dissidents inside and outside Iran. Some of the letter’s signatories have campaigned to lift sanctions against the Islamic Republic of Iran and in particular the Quds force of the IRGC, a branch responsible for many terrorist attacks against US and Israeli targets, either directly or through its proxies like Hamas, Hizbollah, and other terrorist groups.

So let’s break this down once again: they are for sanctions against Israel and oppose them against clerical and paramilitary fascists in Tehran.
Let’s take a closer look at the signatories. One of the signatories is Mahmoud Karimi Hakkak who called for sanctions against Israel and asked Makhmalbaf not to go to Israel. He could be considered just an anti-Israeli academic if he himself had not lived in Israel receiving a Fulbright scholarship. Apparently, the Fulbright scholarship and teaching at Tel Aviv University was tempting enough so that not only did he go to Israel but also gave an interview to Jerusalem Post. It might therefore be better to call Mahmoud Karimi Hakkak a hypocritical anti-Israeli academic. In his defense we should mention that when he was asked why he chose to come to Israel he said “I am here to meet the enemy.” The reporter thought he was kidding but apparently he wasn’t.

It gets even better when we look at another signatory. Her name is Leila Zand. Ms. Zand is very active in defending the Islamic Republic of Iran, campaigning against sanctions and helping Iran’s President, Mahmoud Ahmadinejad and his close ally Esfandiar Rahim Mashayi to meet American peaceniks. She organizes an annual Iran trip, where she takes American leftists to Iran to meet Iranian officials and regime supporters. One does not need to be Einstein to guess what happens when these Americans go back to the US. She happily takes photos with Iran’s Vice President, goes to Iran and tries to lift sanctions against the barbaric regime of Iran and simultaneously campaigns to put Israel on the sanction list.

To be fair, all of this is not very surprising. She is just another pro-Islamic Republic, anti-Israel activist. The surprising part, however, is that she is Mahmoud Karimi Hakkak’s wife and based on Karimi Hakkak’s interview with the Jerusalem Post she was living with her husband in Israel.

A close ally of Esfandiar Rahim Mashayi, Ahmadinejad’s closest advisor and a former senior intelligence officer, Leila Zand was traveling frequently to Iran and meeting Iranian officials while she was living in Israel. What were she and her husband doing in Israel? Let’s go back to her husband’s answer, “to meet the enemy.” Considering their background and their friends in Iran it would be wise to check whom they met.

We can go over the list of signatories and show many other examples of hypocrites, anti-Semites and so forth, but the two we have mentioned in this article should be enough to give readers a sense of what kind of people we are dealing with. All of this makes it once more sadly clear that these Iranians in all those years of living in democratic nations – whether it is the United States or Europe – have not embraced democracy in its core definition at all.

The signatories of the open letter claim that they want an end to the plight of Iran’s citizens and that they support the Palestinians, but in fact they care about none of that. What they do in reality is relativize the barbaric crimes of the Iranian dictatorship towards its own population and undermine the legitimacy of a democratic country – in fact the only democracy in the Middle East – through a boycott movement that hurts both Israelis and Palestinians and is soaked with anti–Semitic prejudices; while at the same time they heavily criticize sanctions and boycotts towards a totalitarian regime that has taken their homeland hostage. It is difficult for anyone with a shred of decency to not get the ridiculousness of this pseudo–intellectual approach.
—
This post was co-written with Saeed Ghasseminejad, a political analyst and PhD candidate at City University of New York.

About the Author
Saba Farzan is a German-Iranian journalist and Executive Director at Foreign Policy Circle, a strategy think tank in Berlin.
Comments