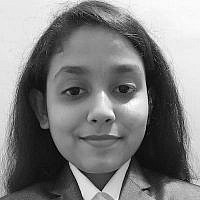 The Blogs
Akankshya Das
National security and Intelligence studies fanatic.
Apply for a Blog
Advertisement
Please note that the posts on The Blogs are contributed by third parties. The opinions, facts and any media content in them are presented solely by the authors, and neither The Times of Israel nor its partners assume any responsibility for them. Please contact us in case of abuse. In case of abuse,
Report this post.

Surrounded by hostile Arab nations, Israel has always invested heavily in its national security since it was founded in 1948. However, one of the most defining features of its security architecture came to life in 2005, when Rafael Advanced Defense System and Israel’s aerospace industry designed the Iron dome: an air defense missile system. In July 2010, the US House of Representatives approved US$205 million funding to expedite the production and deployment of Iron Dome, and in 2011, the system became officially operational at Beersheba, Israel’s eighth most populous city.

The need for a short-range missile system was felt as early as the 1990s when there were increased rocket attacks by Hezbollah on the Israeli population. As Israel is geographically small, most of its civilians live within the range of rockets and the only feasible protection system was to have a short-range missile detective shield. The need for such a system became more urgent in aftermath of the second Lebanon war in 2006 when Hamas – a Palestinian militant group fired a range of rockets on Israeli citizens. Media reports indicate that approximately 4,000 short-range rockets were fired by Israel on Haifa and other northern regions, killing at least 44 Israeli civilians. In light of the threat, at least 250,000 citizens were evacuated and relocated to other parts of Israel.

In between 2000 and 2008, more than 4,000 mortars and Qassam rockets (the military arm of Hamas) were fired from Gaza into southern Israel. As a result, nearly one million southern Israelis came within the range of rocket attacks. In response to the aerial threat, the Israeli Defense Ministry developed a mobile air defense system in 2007. The system was tested successfully in 2009 and 2010, and in 2011 Raytheon and Rafael partnered to commercialize the Iron Dome system in the US. Ever since the system has been successful in intercepting rockets and missiles from hostile countries.

Understanding the Iron Dome System: The Iron dome system has three features that makes it one of the most sought-after defense products of Israel. It has a Radar, Controller, and a Launcher. The system detects and tracks the enemy’s rocket through its radar, then calculates its impact point through the Control system, and finally, the launcher fires the missile when the enemy launches a rocket towards it. It is used to counter short-range rockets and low-tech rockets, artillery and mortars, helicopters, aircraft, etc. In addition to working effectively in all weather conditions (fog, rain, thunderstorm), day and night, the multi-mission defense system can simultaneously fight multiple attackers at once. 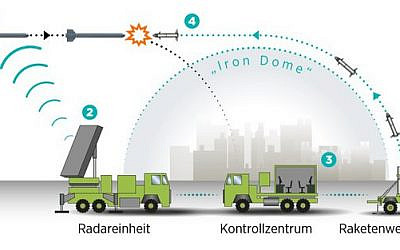 What’s unique about it is that the launcher has an optical sensing device that generates electric waves, which means if any rocket passes parallel to the missile it will explode, resulting in the destruction of the enemy’s rocket. Despite its small size, the iron dome covers an area between 8-10 kilometers. I find it particularly interesting that this system can be easily moved around in trucks from one location to another, it does not require substantial manpower to run, and it can also be deployed at sea. Its developers claim that they have designed this system so even women soldiers who stand an average height of 5’2 and weigh 45-50 kgs can operate it easily.

As with any advantage, there are also drawbacks. If the enemy attacks with a ballistic missile or advanced rocket weaponry, this system is ineffective. Yet, Israel has a solution to everything. The iron dome system is complemented by an aerial defense system called David’s sling which works against ballistic missiles extended up to 160 km, and Arrow missiles which targets more advanced missiles. The entire system is quite expensive, each battery costing around 100 million dollars, and each interceptor missile costing about $50,000. Iron Dome developers claim that its success rate is phenomenal, but in my opinion, it’s still an expensive system. However, considering the level of commitment Israel and its citizens have towards their national security, the whole idea of developing and operating this system makes sense. 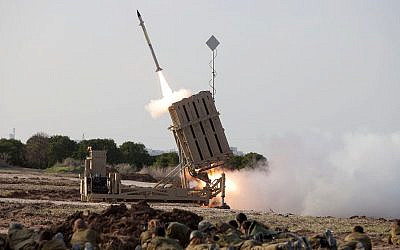 In August 2020, Raytheon and Rafael formed Raytheon Rafael Area Protection Systems to establish an Iron Dome production facility in the US. Iron Dome’s capabilities were tested in a variety of complex scenarios, with successful intercepting and destroying targets, and the US army has been working to integrate the system into its defense array.

However, the system’s feasibility and applicability in India’s security scenario remains doubtful. In an interview to the Eurasian Times in January 2021, Air Marshal Anil Chopra (retd) said that the “Iron Dome is a very good system since it has got both Israeli and American technologies. But the problem is that we have already chosen two other systems, i.e. S-400 and NASAMS of the Americans. Also, we are working with Israelis on Barak-8, going for Iron Dome now does not make sense. If we had chosen Iron Dome in place of other systems, then it would have been a different game.”

It is also worth noting that India’s major threats come from China and Pakistan who have advanced ballistic missiles and are much less likely to fire short-range rockets against India. Thus India, in partnership with Israel, has invested in medium-range Barak missile system to defend against airborne threats. As suggested, Indian defense procurements are on a different trajectory now, and employing Iron Dome would not be an easy decision- strategically or financially.

About the Author
I am currently pursuing my Bachelor's degree in the School of internal security, defense, and strategic studies at Rashtriya Raksha University, India. It is a centrally funded institution under the Ministry of Home affairs which is primarily devoted to the field of national security and strategic affairs.
Related Topics
Related Posts
Comments